Democrats, correction Communists (call them by that which they are)  has spent their capitol over the past two years doing all things anti-Trump, i.e., resisting and blocking the President’s agenda, brainwashing white folks to the point of self-loathing, levying false allegations of white privilege, racism, sexism.

Moreover, bureaucrats collaborated with deep state resistance leaders, the Communist media complex and regurgitated pre-scripted propaganda for the purpose of dismantling the American family, our borders, the rule of law and bill of rights.

Speaking of dismantling the rule of law, Project Veritas (PV) sent their people to several polls locations across the country in search of voter fraud, election tampering and interference. PV didn’t have to look hard before they found what they were looking for.

Election poll workers are not supposed to influence the vote but at one particular poll in OHIO, as you will see in the following video, one female poll worker, a Democrat acted as if she was doing a service for her preferred candidate, i.e., Sherrod Brown. She even offered up a pamphlet.

As we all know, the past two years has been about resistance by Democrats, correction Communists (call them by that which they are) from blocking the President’s agenda, brainwashing white folks to despise themselves, levying false allegations of white privilege, racism, sexism, following the lead from a biased media and taking a blowtorch to the rule of law. 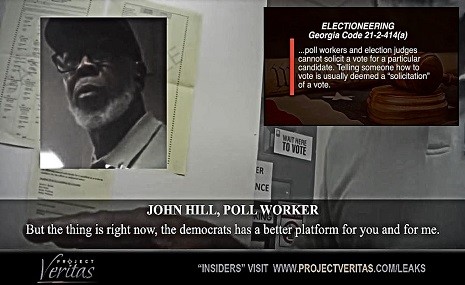 Speaking of disdain for the rule of law, thank goodness for Project Veritas (PV) who sent their people in to several locations in search of voter fraud, election tampering, etc. Long story short, PV found what they were looking for.

Election poll workers are not supposed to influence the vote but at a poll in Georgia, there were those who didn’t think twice.

Georgia Electioneering: “Democrats has a better platform” Says Elections Off. in Undercover Video

I’m not sure if the poll worker in this video actually believes that Progressives have a platform or he’s lying.