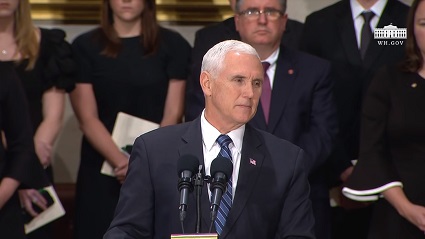 On Monday, Vice President Michael R. Pence delivered the eulogy for President George Herbert Walker Bush presently lying in state in the rotunda of the U.S. Capitol in Washington, DC,

The funeral for the 41st president will be held tomorrow morning (Wednesday, December 4, 2018), invitation-only at the Washington National Cathedral.  President Donald J. Trump and First Lady Melania Trump are scheduled to attend.


If unable to view above video, you can view it here. 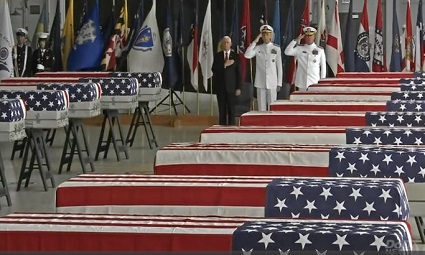 If unable to view video above, you can watch the ceremony at the Department of Defense News site here.

The Defense POW/MIA Accounting Agency hosts an honorable carry ceremony at Joint Base Pearl Harbor-Hickam, Hawaii, Aug. 1, 2018. The 55 flag-draped transfer cases being carried in the ceremony are believed to contain the remains of service members lost during the Korean War.

Never once forgotten, may the Heavenly Father bless our POW/MIAs of the Korean War now returning home to their families and loved ones.

May God bless the families and loved ones of the missing fallen.  The sacrifices of these patriots were never forgotten, nor will they ever be.

“Greater love hath no man than this, that a man lay down his life for his friends.” John 15:13 (KJV)

May the fallen service members now home forever rest in eternal peace.  With deep gratitude, America thanks you for your service.

Our hearts are with those families still awaiting the return of a loved one.  A nation stands, prays and waits beside you 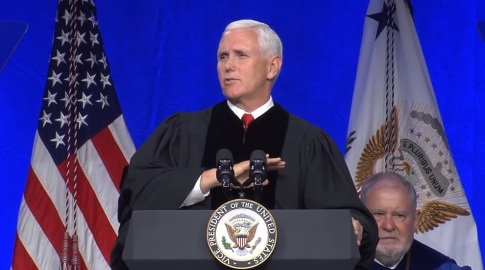 Vice President Mike Pence addresses the Class of 2018 at Hillsdale College’s 166th Commencement on May 12, 2018. 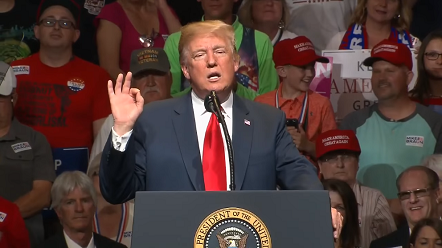 Braun’s victory was, of course, a win for the President in light of the fact that Democrats and the Communist media complex are labeling primaries a referendum on Trump.

Last evening, we saw and heard Vintage Trump who speaking before a full house of Trump supporters touted his accomplishments, called out and stuck it to his enemies, announced his support for the Indiana Republican Senate candidate, as did Vice President Pence, discussed foreign policy including pulling out of the Iranian nuclear deal, North Korea’s release of three Americans this week, etc.

Below is the video of the spirited rally which begins at 09:14.  Shortly thereafter at 11:15 of the video Vice President Mike Pence makes his appearance and received a hearty welcome from fellow Hoosiers. 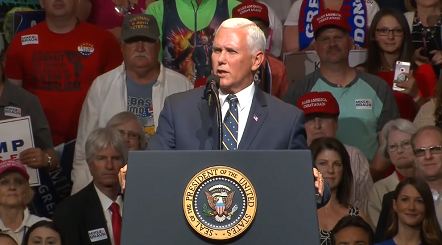 During his speech, the Vice President delivered to fellow Hoosiers a chronology of Donnelly’s failed voting record up until his alleged intent vote “No” against the confirmation of Trump CIA nominee, Gina Haspel.  [Donnelly has so far not stated which way he is voting on Haspel’s confirmation but a little heat may force the Democrat’s hand while sending the message that voters have their eyes on him.]

Pence’s speech was a rousing prelude touting the virtues of Mike Braun, “Mike Braun will stand with President Donald Trump.” Gracious as always, VP Pence thanks fellow hoosiers for their role in the 2016 presidential election leading into the introduction  and speech of President Trump which begins at approximately 27:00 of the video.