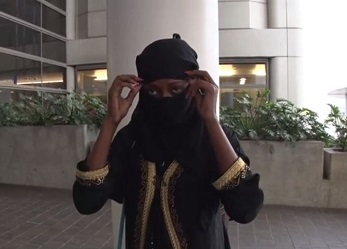 The more Progressives try to silence voices of opposition the louder these Muslim pigs shout.

One day after the Orlando Florida Islamic terrorist attack, a journalist and cameraman caught the rantings of Muslim woman at Los Angeles International Airport making terror threats against the United States.

I know, I know. I didn’t hear or read about it in the news either.

Journalist and cameraman Tony Vera captured police questioning a Muslim woman at the airport and searching her luggage, but finding nothing wrong, they released her and let her continue on inside the airport.

Vera stopped her as she walked past him, and that’s when she let lose again, with verbal terrorist threats against America. “F*** America,” the woman said. “I will make sure we bomb America. You wait and see!”

She ranted on for several minutes, and eventually police arrested her again at the ticket counter, this time for real. The video has been turned over to the FBI.

Without the video below, this incident would have gone entirely unnoticed, as authorities have released no additional information about the case.