“The Occupy Wall Street protestors, in an effort to critique Danny Meyer’s role on the board at Sotheby’s, swarmedUnion Square Cafe and Gramercy Tavern on Thursday, blowing air horns inside the restaurants and making speeches against Meyer and those who support him. They are angry at the auction house because it is embroiled in tense labor negotiations with its union and workers have been locked out for three months. Said a protester in a speech at Union Square Cafe, “We will be here to make sure Danny Meyer is uncomfortable and anyone who supports him is uncomfortable…His restaurants will not be peaceful….

So now, the Marxist thugs are declaring war on Danny Meyer because of his affiliation with Sotheby’s.

Translation:  (i) Punish a prosperous businessman for his successes; (ii) punish his customers for being able to afford to eat out occasionally and (iii) for dining at Union Sq. Cafe and Gramercy Tavern.

No doubt, the unions are behind this misplaced assault on Danny Meyers who is well liked, popular and whom I understand is very good to his staff.

Enter Teamsters Local 814 whom Sotheby’s locked out on August 1st until an agreement can be reached.

Shame on these Marxist invaders who proclaim 24/7 that they will not be hijacked.  Too late, the dolts were hijacked long ago.

Danny Meyer is one of the good guys!

This Marxist witch like so many others on the left is the prime example of the pot calling the kettle black.

Levin to Hoffa: We outnumber you and we’re goin…, posted with vodpod

No doubt, James Hoffa, Sr. must be twisting beneath the end zone over the fact that James Hoffa, Jr. is playing pool with the same element of thuggery that ended his father’s career.  That being said, Hoffa, Jr. is clearly all brawn and no brains.

Moving on, a word to this thug and his crew, BACK OFF DIPSTICK.  THE AMERICAN PEOPLE ARE STANDING FOR SOMETHING MUCH BIGGER THAN YOU. 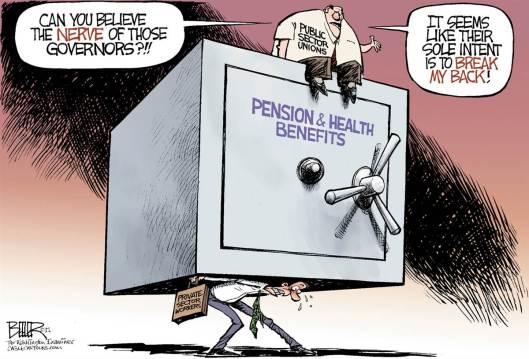 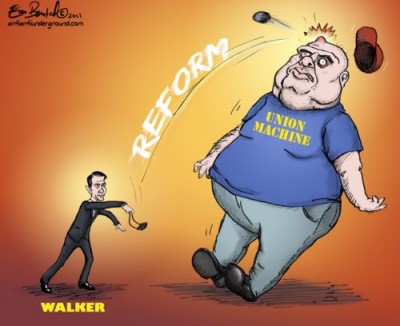 The first video I found in an article at The Blaze is from The Tea Party group Truth About Bills .  The video is of a unfriendly union protester who attempts to intimidate a tea partier filming the protesters with a head butt, during which the union punk tells the tea partier, ‘I’ll break your God**mned neck.’

“Andrew Staroska, COO of Truth About Bills, was the person threatened in the video. He tells The Blaze that he was there to speak at a press conference in support of controversial anti-union bill SB5. While “walking around just viewing the union members protest to the Gov. State of the State Address,” he says he was confronted by the man in the video.

‘I said nothing to the man and he approached and threatened me.”’

Below is a photograph of the hostile union protester from the video wearing a teamster’s jacket (note the logo).

The next video is an education and insight into the tactics that unions use to keep us in the dark.  As you will see from the video, union protesters want to do their dirt without witnesses and proof and they are not afraid to bully, push, shove and intimidate.

Are all teamster members FAT a$$ PUNKS?  Here is part of the previous video from another angle.

As we used to say growing up in the hood, “These punks are egging for a fight.”  And that they are patriots.  Progressives have been bullying, threatening and intimidating America for so long that for them it is business as usual.

They cannot possibly conceive the thought that Americans have had it and are now standing up to them.

Since Progressives thrive on discourse and chaos, they have concluded that if they apply a little more heat and aggression that we will back off cowering like sheep.

Shame on Progressives for behaving like the punks they are.

Please also feel free to pass this on.  Let everyone know just how low Progressives are sinking to silence our voices.