The NeverTrumpsters aka GOPe continues to dig that hole.

Speaking of Mitt “the Choke” Romney.

Donald Trump who has been urged to sit out campaigning until after the RNC next month in Cleveland, Ohio hit the trails speaking earlier today before a crowd of approximately 7,000 people in Tampa, Florida, “I’m listening to lies being told about me by this dishonest media,” he said, as he’s sitting at home. “I can’t wait. I’m dying to get going…I want to do this.”

Trump also took time to criticize failed 2012 Republican nominee Mitt Romney, who continued his criticism of Trump during an interview with CNN on Friday.

“I watched this poor sad Mitt Romney this morning,” Trump recalled of the interview where Romney called Trump a racist, among other attacks. “I don’t think he knows what misogynist is.”

“Don’t forget this guy let us down,” Trump reminded his supporters…

In one case, a CRS representative and protester are seen to high-five each other.

…The purpose of CRS is to mediate in ongoing disputes–not to foment them, or to become participants. However, there is evidence that the Obama administration may be using CRS as a quiet community organizing force.

Enter the TSA who has no intention of being outdone by the DOJ.  H/t INFOWARS.

The Houston Free Thinkers detained by DHS at the RNC

The Houston Free Thinkers media team have been in Tampa Bay, Florida reporting on the Republican National Convention since Saturday morning….The majority of our experience has been pleasant, with the police officers respecting protesters rights, and not inhibiting free speech.

While doing a walk through the downtown Tampa area we noticed something interesting. The TSA was searching citizens who chose to travel by way of Greyhound bus. We stopped to film this violation of free citizens rights and while doing so noticed we were being filmed by the Department of Homeland Security Federal Protective Services. So we began filming in return and decided to cross the street to get a closer look.

Bull DHS, TSA, DOJ they are not here for the good of Americans.  Do not believe the hype.  This is tyranny, Obama’s gift to America, NDAA, the police state, and a violation of our liberties.

Take note patriots, these TSA goons are not displaying any identification, Stars and Bars or a flag pin on their uniform.  In other words, they have no allegiance to the U. S. Flag, our nation, the U. S. Constitution, The Bill of Rights or the American people.

In the second video (1:24) at the  HoustonFreeThinkers site, one of the DHS officers said that “all public space is federal property.”  Since when did the public streets across America become federal property giving the federal government the right to do anything and to say anything to Americans?

Upon entering the Tampa Bay Convention Center AMTV spotted the  Transportation Security Administration (TSA) checking the RNC media pool as we checked in to cover the GOP convention.  The MSM was swarming all over the place and not one reporter out of tens of hundreds bothered to report on the fact they were being inspected by numerous TSA agents….

PLEASE PASS THE WORD.  SHARE THESE SITES AND VIDEOS WITH EVERYONE.

WE MUST TAKE A STAND FOR LIBERTY AND FREEDOM AGAINST A TYRANNICAL GOVERNMENT. 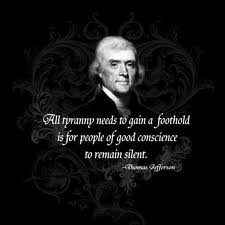 One of the left’s favorite attacks on the Republican Party is that it is the party of old white people, devoid of diversity and probably racist…. 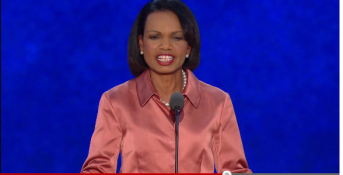 As always and true to form, MSNBC is on a roll of deception, no doubt under orders from their bosses at the White House.

The last thing that Progressives would want Blacks, Latinos among other supporters to realize is that the Republican Party is made up of Americans from all ethnicities and not solely made up of “‘older white people’” as is by Marxist propagandists.

…Early on during the convention coverage last night, NBC’s Chief White House Correspondent, Chuck Todd and his goatee, roamed the floor of the convention hall to reassure MSNBC viewers that the only reason people of color were showing up on their television screens was due to the fact that the GOP strategically placed non-white convention-goers for maximum camera advantage.

In other words, Todd and his goatee told the audience that non-white convention-goers were nothing more than tokens….

Todd’s reference to Blacks, Latinos, and Asians etc. in attendance at the 2012 Republican National Convention as tokens is offensive. 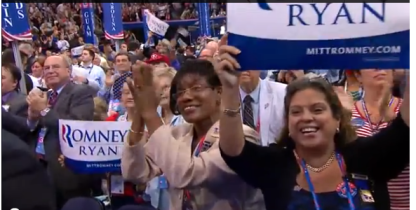 I could have included more photographs but you get my point.  When I look at the sea of people in attendance, I see AMERICANS.  Only a Progressive would see a label but to refer to Americans as tokens, I truly beg to differ.

The only reason that there is a sea of so many Black and Latino faces at Progressive functions is because they are paid, bought lunch and bused into the site and used as astroturf.

Let’s not get it twisted, those Blacks and Latinos bused in and paid for by Progressives f are the real tokens not non-white Conservatives in attendance at the convention.

Keeping it real, one would go so far as to say that those bused in by Progressives are not only tokens but also tools of propaganda.

These slugs and spin masters are not just doing a disservice to Black Americans but to all Americans.

Wake up Black America; you continue to slumber to your own peril.

As proven by their never-ending agenda of Marxist spin and omissions the objective is to keep America divided America by spreading hate, keeping Black Americans on the plantation, indoctrinated, uneducated and poverty-stricken.

All of the above explains why MSNBC’s ratings are lower than the deepest part of the ocean on the planet.

Not that they are perfect but there is a reason as to why the much hated by the left Fox News left everyone in the dust.

As reported by Michelle Malkin:

Drew McKissick is a longtime conservative activist and blogger who is in attendance at the Republican National Convention’s Rules Committee meetings. He and others on the ground are sounding the alarm over rules changes that he and many other attendees believe will hurt grass-roots movement conservatives. The battle is being cast by some observers as a narrow fight between Ron Paul advocates and the rest of the party. Drew says that’s not true….

Beginning with the intentional exclusion of allowing Sarah Palin a speaking role at the RNC, it was evident that something was afoot.

The media on the left as well as many on the right are attempting to minimize the power grab by placing the blame (what else is new) on Ron Paul supporters.

Do not believe the hype, the well runs deep.  This is about the Republican establishment shutting down and disempowering the people.  An unwise and very PROGRESSIVE move I might add and one that should concern all patriots.

For an update, I refer you to Twitchy.

Barack Obama and the Progressive establishment on both the left and the right must go.

On the right, John Boehner is at the top of the list.

The medical examiner has ruled this death an accident. Either someone does not want to be bothered or Florida law officials has accepted Islamic law to U.S. criminal law. Talk about sending the wrong message.  H/t Gates of Vienna.

Where is the media?

Leave it to the liberal media to be all excited and act like the TSA is doing us all a favor.  Nothing could be further from the truth.

Sheeple wake up.  The more TSA invades your person and tramples upon your fourth amendment rights, the less free you are.  Don’t you get it?  That is the point of it all.