The REAL reason that Progressives are fighting back so hard over the release of releasing the GOP’s memo that exposes mass wrong-doing in securing the FISA warrant and spying on President Donald J. Trump, his family, campaign staffers etc.?

As most of us have suspected, ALL roads lead to BARACK OBAMA and the British government who, from what I see, have cut off their noses to spite their faces. They cannot be trusted.

Anyone remember when Judge Napolitano was suspended from Fox News for claiming the UK spied on the Trump campaign? He was eventually reinstated with little fanfare and he stuck by his sources who made the claims. Well, now we hear that it was true! There is even a document available to back it up.

.@Judgenap: Three intel sources have disclosed that Pres. Obama turned to British spies to get surveillance on Trump pic.twitter.com/IghCFm7qhO

Israpundit reported that British Intelligence spied on Donald Trump at the direct request of President Barack Obama and due to a renewed request by known liar and unmasker Susan Rice. It was all done, allegedly, WITHOUT WARRANTS!

No, not the photo on top here. That’s just click bait. Forgive me.

While perusing the White House photo stream for an image, I ran across the photograph down below of Barack Obama, Lorretta Lynch, Susan Rice along with a few others.

In the middle of it all, is FBI Director James Comey sitting on the sofa looking up at Barack Obama.  What do you imagine is going on there and how would you caption this photograph?

And what do you think of the White House documenting this particular moment? 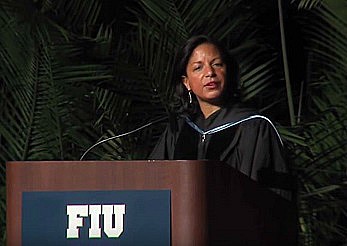 In a White House often accused of being stacked with loyalists, President Obama’s national security adviser said Wednesday there are too many white people in key government posts, endangering national security because they think alike.

Speaking at Florida International University’s commencement, Susan E. Rice, who is black, said a diversified government workforce is more likely to yield “better outcomes” than a predominantly white one.

Referring to criticism that the U.S. national security workforce is “white, male and Yale,” Ms. Rice told the graduates, “In the halls of power, in the faces of our national security leaders, America is still not fully reflected…”

Rice’s speech was purely ideological full of Progressive platitudes. From diversity to globalism to diversity, at 07:13 of video, begins her “too many white people in key government posts” spiel.

“…By now, we should all know the dangers of ‘groupthink,’ where folks who are alike often think alike,” she said. “By contrast, groups comprised of different people tend to question one another’s assumptions, draw on divergent perspectives and experiences, and yield better outcomes.”

Her comments were reminiscent of Supreme Court Justice Sonia Sotomayor, who said in a speech in 2001before Mr. Obama appointed her to the high court, “I would hope that a wise Latina woman with the richness of her experiences would more often than not reach a better conclusion than a white male who hasn’t lived that life….”

Continue Reading — Susan Rice to College Grads: There Are Too Many Whites in Top Gov Jobs

Utter hypocrisy that Rice would speak of “groupthink” when she plays a major role in an administration that condones mic checks, safe spaces and fear mongering not to mention physical, and verbal attacks on opposing voices intended to crush their will and squash their free thought and speech.

‘The attack was an organized operation with specific information the US Ambassador was present.’ – Defense Intelligence Agency cable, September 12, 2012

(Washington, DC) – Judicial Watch announced today that it uncovered a September 12, 2012, cable from the Defense Intelligence Agency (DIA) to the Department of State Command Center (DSCC) revealing that the Obama administration was informed within 24 hours that the attack on the U.S. Special Mission Compound in Benghazi was “an organized operation” carried out by a “Salafi terrorism group” in retaliation for the killing of al-Qaeda’s second in command, Libyan national Abu Yahya al-Libi. The documents, from the DSCC, were provided to Judicial Watch in response to a court order in a Freedom of Information Act (FOIA) lawsuit filed in the U.S. District Court for the District of Columbia on October 16, 2014, (Judicial Watch v. U.S. Department of State (No. 1:14-cv-01733)).

The lawsuit seeks “any and all logs, reports, or other records” the Washington-based Diplomatic Security Command Center produced between September 10, 2012, and September 13, 2012, relating to the terrorist attack on the U.S. compound in Benghazi, Libya. The DIA cable obtained by Judicial Watch states:  “The attack was an organized operation with specific information that the US Ambassador was present.”

The DIA cable was emailed to numerous State Department recipients by the DSCC at the request of the National Counter Terrorism Center (NCTC), further confirming that the Obama administration knew the assault was a well-organized terrorist attack before President Obama, Secretary of State Hillary Clinton and National Security Advisor Susan Rice claimed the assault was the result of an “unpremeditated… spontaneous protest” over an obscure Internet video….

Below is the communication between Defense Intelligence Agency (DIA) to the Department of State Command Center (DSCC) stating that the September 11. 2012 Islamic terrorist attack on the US Consulate in Benghazi, Libya “was in retaliation for the killing of an Al Qaeda operative.”

As overlooked by the mainstream media, Susan Rice, Barack Obama’s National Security Advisor during a speech Monday at the National Press Club (National Leadership Assembly for Israel) stated that the United States remains committed to Israel despite signs that would say otherwise (my emphasis).

Rice dismissing claims made against Israel by the United Nations Human Rights Council admonished the anti-Semites labeling Israel’s critics as biased and unjustified.

….Rice was particularly critical of the United Nations human rights council, which recently voted for an inquiry into the possible war crimes violations committed by Israel.

‘When countries single out Israel for unfair treatment at the UN, it isn’t just a problem for Israel, it is a problem for all of us,’ Rice said on Monday. She added: ‘No country is immune from criticism, nor should it be. But when that criticism takes the form of singling out just one country, unfairly, bitterly and relentlessly, over and over and over, that is just wrong – and we all know it….’

In addition, Rice called for an immediate and “unconditional humanitarian” ceasefire but as expected her speech did not go over to well with protesters. One heckler interrupted Rice’s speech and found himself immediately removed from the premises.

In spite of Rice’s defense for Israel and admonishment of the United Nations human rights council, the mainstream media, Politico among others, reported ONLY that Rice felt that “the death toll and the civilian toll in Gaza is rising in an alarming pace….It’s a concern that is grave and deepening on the part of the United States, the American people and the entire international community…”

In 2007, Qumu was released to the Libyan government for continued detention in Libya.  However, based on the unfortunate events of the past week, Americans are now aware of just how well that worked out.  (History repeats itself s we recall Scotland’s release with the blessings of Barack Obama the Lockerbie bomber two years ago.)  See Gitmo Release Documents for Abu Sufian Ibrahim Ahmed Hamuda Bin Qumu at the bottom of this post.

While the White House and State Department continue to cover up their culpability in the September 11 2012 attacks by lying, pointing the finger elsewhere and playing the blame game, U. S. Intelligence proves otherwise.

STOP THE LYING, STOP THE COVER UP

Americans have no interest in reports that Qumu “may have led” the terrorist attack on the U. S. Consulate in Benghazi, Libya or that the attacks came about because of some lame film.

For more links and plenty of information on the cover up, why and what is at stake, check out Bunkerville‘s post entitled, Libya attack tied to Al Qaeda and Gitmo detainee Sufyan Qumu.