Sixty days ago, Meriam Ibrahim, a Christian who would not give up her faith was in a Sudanese prison sentenced to 100 lashes and death for apostasy.  Imprisoned with Ibrahim was her son Dani and newborn baby girl, Maya.

No doubt, it has been a long ten months for the family but this morning Ibrahim and family are free and beginning their new life in the United States after arriving last evening to a New Hampshire airport.

Friends, a nun and members of the Sudanese New Hampshire community waited to welcome the Ibrahim family home in the cargo bay area.

Meriam Ibrahim smiled and hugged her supporters as she landed in Manchester, New Hampshire and told a friend: ‘Don’t cry, I’m here now’.

Friend Maria Ajang said: ‘She was so happy. She said: ‘I’m so happy to see you guys here’.

Her husband Daniel Wani sobbed uncontrollably and said: ‘It’s good to be home.

‘There’s a sense of relief.

‘I want to thank everyone who helped get us home’….

For the Ibrahim family, may the road ahead be smooth and forever blessed.

A new lawsuit against a Sudanese woman who was sentenced to death for refusing to recant her Christianity has been dropped, paving the way for her to seek exile in the United States.

The case was brought by 27-year-old Meriam Ibrahim’s Sudanese Muslim father to formally establish her as his Muslim daughter. She claimed she was raised by a Christian Ethiopian family and was abducted by the Sudanese Muslim family, a claim they denied….

The Sudanese woman who gave birth in a Khartoum prison with her legs in chains has said that her baby daughter is disabled as a result of her treatment.

Meriam Ibrahim, 27, was sentenced to hang for apostasy on May 15, when she was heavily pregnant with her second child. Less than a fortnight later she gave birth to Maya – but the prison authorities refused to remove the shackles on her legs.

‘I gave birth chained,’ she said, in her first description of the May 27 birth.

‘Not cuffs – but chains on my legs. I couldn’t open my legs so the women had to lift me off the table. I wasn’t lying on the table.

When asked whether she was frightened that giving birth in such conditions could harm her baby, she said: ‘Something has happened to the baby.’

She explained that her daughter had been left physically disabled – but the extent of the disability would not be clear until she was older….’

Meriam Ibrahim and family could be out of Sudan and on a plane to the USA in a matter of hours if Barack Obama would place a call to brother, Malik but Obama is too busy overwhelming our economy with his bound to fail immigration agenda.

Tonight there are conflicting reports coming out of Sudan pertaining to the re-arrest of Miriam Ibrahim 24 hours after Sudanese appeals court dropped the death sentence against Ibrahim freeing the Christian and her two children.

Pursuant to the Daily Mail, although Ibrahim was released after her detainment Tuesday, she is now banned from leaving Sudan. In addition, Ibrahim is being charged with falsifying documents.

Ibrahim and her family were detained for several hours Tuesday at Khartoum Airport as they were attempting to leave Sudan.

Meriam Ibrahim has been accused of falsifying travel documents as she tried to leave the African country hours after the death penalty was dropped against her.

It is understood that the authorities told her she should have used the Muslim name she had when she was born, not the Christian name she uses after choosing to worship that faith….

The new allegations are a huge setback to Meriam’s hopes of leaving Sudan and a further sign that the Sudanese government is playing twisted games over her release.

Meriam, a doctor, is on bail which was put up by a friend. She cannot leave Sudan until this matter is resolved as part of her bail conditions….

Agents from the National Intelligence and Security Services (Niss) apprehended the family just 24 hours after Ibrahim was released on the orders of the appeal court.

Her lawyer, Elshareef Mohammed, who was with Ibrahim at Khartoum airport at the time, said more than 40 security officers prevented the family from boarding a plane to the US. Ibrahim’s husband, Daniel Wani, is a US citizen….

On Tuesday night, news agencies in Khartoum said Ibrahim had been transferred from Niss custody to a police station, where she was being questioned about her documents….

According to reports Tuesday afternoon, Ibrahim was released and sent on her way. As usual, the matter of politics comes into play.

…The report speculated that the National Intelligence and Security Service — a key stakeholder in Sudanese politics — was unhappy with the recent decision to release Ibrahim and that “re-arresting her and her family was a way of making this point to the rest of the Sudanese government.”

‘It is also conceivable that one part of NISS accepted Mrs Ibrahim’s release, while another section was not happy with it. Mrs Ibrahim’s release and re-arrest simply underline the fact that there are many decision-makers in Sudanese politics, and they do not always agree with each other,’ it added….

Below is an excerpt from Tuesday’s State Department press conference (video):

So much for assurances from the Obama Administration.

On what is sure not to be a final note, Obama could always call his brother, Malik, and tell him to end this now.

Free! #MeriamIbrahim is home with her husband after appeal court overturned all charges. Thank you! pic.twitter.com/6zrD7fxiIc

Breaking now is news that Meriam Ibrahim, Sudanese woman arrested and convicted of apostasy, as ordered by a Sudanese appeal court, has been freed and her death sentence canceled this afternoon.

Taking into account that Ibrahim’s children were imprisoned with her, they too are now free.

Ibrahim, the wife of a Catholic American and mother of two was sentenced to 100 lashes and death by hanging after refusing to convert from Christianity to Islam. The sentence provoked an international outrage.

A 27-year-old woman sentenced to death last month for converting from Islam to Christianity in Sudan has been freed from prison and sent to a safe house for her own protection.

The case of Meriam Ibrahim, who is married to a Christian American, triggered an international outcry. She gave birth to a baby daughter while in prison.

‘The appeal court ordered the release of Mariam Yahya and the cancellation of the (previous) court ruling,’ Sudan’s SUNA news agency said. The couple’s 20-month-old son was also held in prison with Ms Ibrahim and her newborn daughter.

MailOnline has led the way in highlighting the plight of Ms Ibrahim, who was sentenced to death on May 15. After international pressure a government official said on May 31 that Sudanese officials were working to release her.

She was only finally freed this afternoon.

Ms Ibrahim’s lawyer Mohaned Mostafa said after her release she had been sent ‘to an unknown house to stay at for her protection and security.’

‘Her family had been threatened before and we are worried that someone might try to harm her,’ he said….

Many here in the USA, cried out for Ibrahim’s freedom. The next step is to get the Ibrahim family safe harbor to the United States and granted immediate legal status.

…In response to her death sentence, the ACLJ launched an international effort to free Meriam and her children. Our petition for her release garnered over 380,000 signatures, and we delivered a letter directly to the Sudanese embassy demanding that Sudan comply with its own law and with international law and release Meriam.

We are thankful for her release, but our work is not done. It’s time to bring Meriam and her American children home to America. It’s time to grant her asylum so that she can worship and raise her children without fear, here in the land of liberty.

Join us as we call on the Obama Administration to grant Meriam and her American children safe passage and immediate legal status.

Sign our petition to bring Meriam and her American children home…. 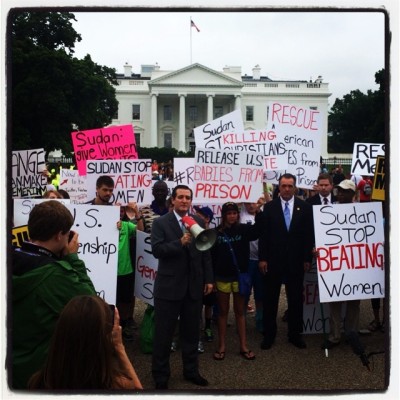 WASHINGTON – Sen. Ted Cruz, R-Texas, today told a rally in Washington, D.C., it is time for the U.S. to do something about the plight of Meriam Ibrahim, a Sudanese Christian woman condemned to death for leaving Islam, even though she was raised a Christian.

Cruz told more than a hundred assembled listeners outside the White House, “Let us unite people across the world to release Meriam.”

Ibrahim, whose husband is an American citizen, is in a prison in Khartoum with her toddler son and newborn daughter, who was born behind bars….