AFSCME, one of the nation’s most powerful unions has severed all ties with the United Negro College Fund after the UNCF accepted a $25 million donation from the Koch Brothers based on politics in spite of the fact that the Koch Brothers has been donating to the UNCF since 2005. 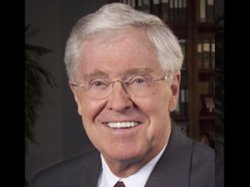 In a letter sent Tuesday, AFSCME President Lee Saunders wrote that the UNCF has taken actions “deeply hostile” to public employees, which he considers a “profound betrayal of the ideals of the civil rights movement,” and that the union will end its relationship with UNCF.

Saunders cited the UNCF’s decision to accept a $25 million grant from Koch Industries, Inc. and the Charles Koch Foundation as a reason for the split, as well as the decision by UNCF President Michael Lomax to speak at a summit hosted by the Kochs in California.

AFSCME’s message to the UNCF: How dare Black people step off the plantation. How dare the UNCF accept donations from one who shares different politics and views of what America should be. (cynicism)

This donation by the Koch Brothers has nothing to do with politics or one’s ideology unless of course one happens to be an evil Communist as is the case with AFSCME (see letter below) who has decided to punish the UNCF (and the future of Black Americans) for stepping off the Progressive plantation, if only for a moment, by terminating its Union Scholars Program with the UNCF.


View this document on Scribd
The crux of it is that Progressives do not approve of non-progressives donating to causes that would further the education or improve the lot of Blacks out of fear that Blacks will walk away from the Progressive plantation.

The massive outcry demanding that the UNCF return the donation to the Koch Brothers gives credence to the fact that Progressives want to keep Blacks on the plantation.

It is only acceptable for Blacks to move up only so long as it one does so under terms laid out by Progressives.

Overlooked amongst the massive outcry is the reality that Black students in receipt of these scholarships acquired due to Koch donations would not be that much less in debt over their heads to the federal government after graduation, something that Progressives find highly objectionable.

Kudos to UNCF president, Lomax for standing his ground and not letting ideology get in the way of what is best.

In other words, Progressive elites prefer to see Blacks uneducated, workers unemployed and all government dependent solely because they cannot risk the enslaved walking away from the plantation.

One more thing, have you noticed that the Progressive will only say, “It’s for the children” when something is beneficial to Progressive elites. In this instance, as far as Progressives are concerned, the children can go to hell especially Black children.