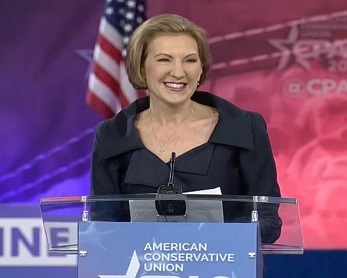 On Friday night, former 2016 Republican Party presidential primary candidate, Carly Fiorina let the establishment of both parties have it with both barrels.

Fiorina called out Progressives and the mainstream for pushing the meme that it is Hillary turn after which she nailed the GOP establishment for their vote for whom we tell you meme.

Compounding the insult is the nerve of the GOP establishment to express “horror” over the preference of voters.

At the Conservative Political Action Conference (CPAC) near Washington D.C. hosted by the American Conservative Union, Fiorina lit into the establishment for expressing “horror” at the choice of the voters.

She then turned to her own party.

The Republican establishment thought it too knew just what to do after the 2012 election. First, they decided, we needed comprehensive immigration reform. Then, we needed to talk less about ‘the social issues’. And there were too many candidates in the 2012 primaries….

You can view the video here on C-Span.

Great speech, which I am sure, had many squirming in their seats or nearly choking on their steak.