Bill Clinton lashed out at the accusations his wife, Democratic presidential candidate Hillary Clinton, lied about mishandling classified emails while secretary of state, describing some of the FBI’s response as ‘the biggest load of bull I ever heard.’

On Saturday, Republicans were quick to criticize President Clinton’s characterization of the email scandal, with Wisconsin Rep. Sean Duffy telling “Fox and Friends”: “He’s just trying to spin Hillary out of trouble, and it doesn’t work”[…]

Sorry Bill, Hillary Clinton being called out for her mishandling of government emails and then lying about it how many times and like the Energizer bunny, she’s still going is not “the biggest load of bull” you ever heard or that America has ever heard.

I am certain that if Potus 42 backtracked two decades, he’d come up with a freight yard of “bull” similarly debauched during Bill Clinton’s tenure in the Oval Office.

And then the hits just kept coming.

For the record, Billy Boy —

Clinton also said that the system pertaining to the emails classified and non-classified is “too complicated to explain to people,” i.e., stupid American voters.

Regardless of the manipulated polls, the Clintons are obviously feeling the heat.

Senator Rand Paul has resurfaced long enough to call Crooked Hillary out and the special treatment that she is receiving and why the crooked one “should be precluded her from really be considered from serving as commander-in-chief.” 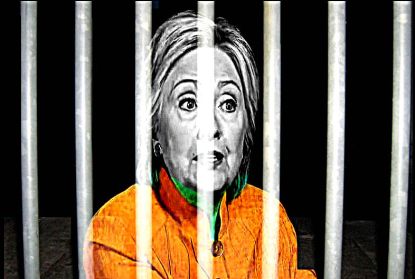 A most deserving fate.

As expected, John Boehner’s final betrayal, one of them anyway, before stepping down as Speaker of the House is the Bipartisan Budget Act of 2015 adding $85 billion to our national debt. 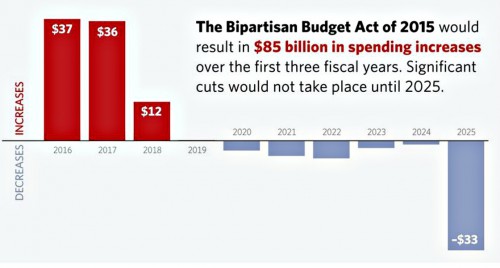 It is both Boehner and Senate Majority Leader/RINO, Mitch McConnell who delivered this gift to Barack Obama but not before 2016 Republican Party primary candidate, Senator Ted Cruz called McConnell out on the Senate Floor on Thursday. 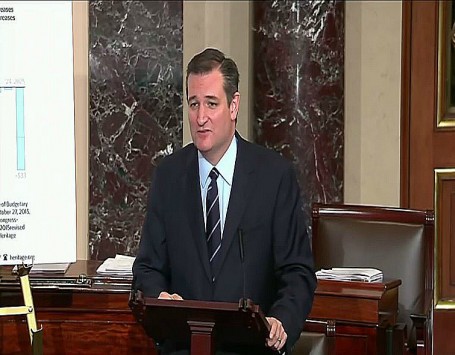 “Now Mr. President what does it say to that a supposedly Republican majority of the United States Senate negotiates a bigger spending bill than Harry Reid and the Democrats?

When the Republicans take charge, oh baby we can do it better. Sum $85 billion…. 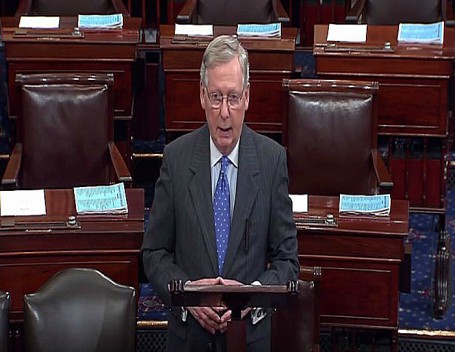 Majority Leader McConnell has proven to be the most effective Democratic leader of modern times….” (approx. 54:12 of video)

The Daily Signal by Kate Scanlon

Cruz said the deal is yet another example of the failure of the “so-called Republican majority” to deliver on their promises to the American people….

‘Nineteen times in the last ten months this so-called Republican majority has passed legislation, has had a vote succeed where a majority of Democrats supported it and a majority of Republicans opposed it,’ Cruz added. [approx. 56:26 of video] 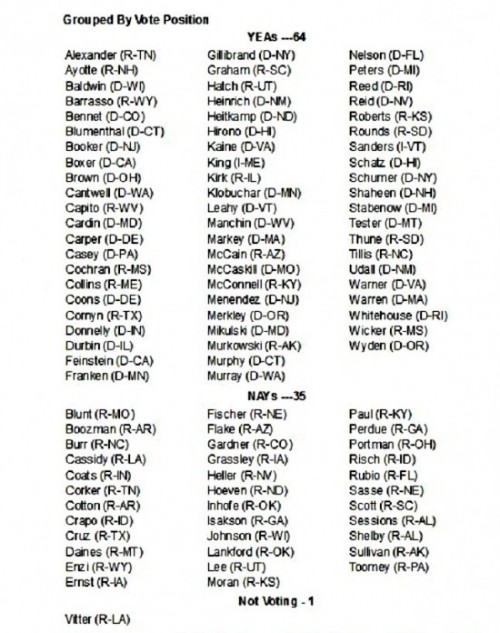 Negotiated for weeks behind closed doors, the usual suspects pushed and passed another crap budget bill that bankrupts the United States, its citizens, our children, grandchildren and great grandchildren with no signs of ending.

According to Melissa Quinn of The Daily Signal, “Conservative senators went head-to-head with Republican leadership before the vote….”

Case in point, in addition to Ted Cruz, remarks made by Senators Rand Paul, Jess Sessions, Mike Lee on the Senate Floor calling out this disastrous piece of legislation.

Suggested Reading: Analysis of the Bipartisan Budget Act of 2015 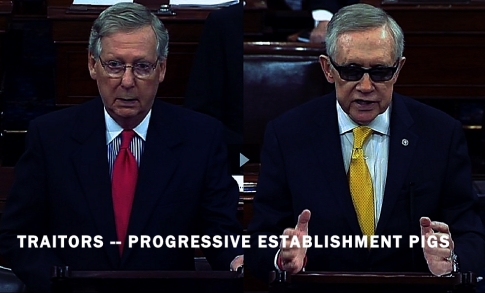 If Rand Paul’s 10 1/2 hour filibuster against the Patriot Act proved nothing else, it confirmed that Senate Majority Leader, Mitch McConnell is no different than his fascist predecessor, Harry Reid.

McConnell who supports both the Patriot Act and Obamatrade had planned to bring the latter to the Senate floor last night (Wednesday) for a vote but due to Paul’s filibuster, McConnell moved the vote back until 10 a.m. this morning in addition to closed debates on Obamatrade and not permitting any amendments to the legislation.

McConnell and his pro-Obamatrade allies have blocked allowing votes on two separate amendments to Obamatrade from Sen. Jeff Sessions (R-AL) —ones that would block a “living agreement” contained within the Trans-Pacific Partnership (TPP) that Trade Promotion Authority (TPA) would fast-track and would stop President Obama from being able to turn trade deals into a dream immigration package for the Wall Street donor class. What’s more, there’s now talk that McConnell might not even allow a vote on a messaging amendment from Sen. Ted Cruz (R-TX)—one that wouldn’t even fix the immigration and guest worker problems in trade deals—even though it’d probably, because it has no teeth, pass the Senate nearly unanimously…. 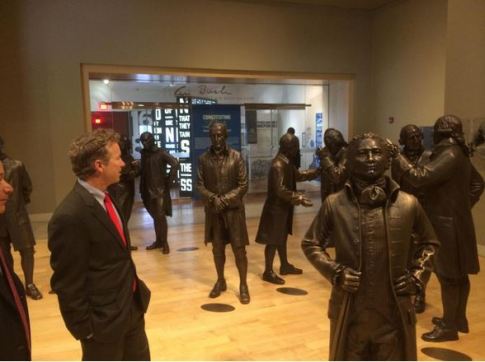 Senator Rand Paul began a filibuster against the Patriot Act on the Senate floor about 30 minutes ago.

The right to be left alone is the most cherished of rights. #StandwithRand — Dr. Rand Paul (@RandPaul) May 20, 2015

ALL three cable news networks going with Goodell presser over Rand Paul filibuster of the Patriot Act.. Obama must have given Goodell a call — el Sooper ن (@SooperMexican) May 20, 2015

Watch the filibuster here>> http://t.co/oBex4oDZS5 and change your avatar to join in opposition to NSA spying pic.twitter.com/Jqt1UOFgwp

A decision last week about NSA spying by a panel of judges on the United States Court of Appeals in New York City sent shock waves through the government. The court ruled that a section of the Patriot Act that is due to expire at the end of this month and on which the government has relied as a basis for its bulk acquisition of telephone data in the past 14 years does not authorize that acquisition.

This may sound like legal mumbo jumbo, but it goes to the heart of the relationship between the people and their government in a free society….

“A clean re-authorization of the USA PATRIOT Act’s bulk record collection program is not acceptable,” said Sen. Cruz. “It is absolutely critical for Congress to balance the privacy interests of law-abiding citizens against the public’s interest in national security. The USA FREEDOM Act of 2015 strikes the right balance by ending the National Security Agency’s unfettered data collection program and implementing other surveillance reforms, while at the same time preserving the government’s ability to obtain information to track down terrorists when it has sufficient justification and support for doing so. I am pleased to join with Senators Lee, Leahy, and others in this bipartisan reform effort, and I look forward to working with both Republican and Democratic colleagues to see that this bill crosses the finish line. Americans deserve nothing less.”

The Freedom Act Bill passed yesterday in Congress on a bi-partisan vote, 338 to 88 after “only one hour of floor debate, and no allowed amendments….” (See The Intercept, USA Freedom Act Passes House, Codifying Bulk Collection For First Time, Critics Say)

As Judge Napolitano states in the above article, “How do we know that the Freedom Act is a Band-Aid only? Because the NSA supports it.”

In addition, so does Barack Obama because the legislation passed yesterday is supposedly in line with a proposal made by the despot last March. If Obama supports it, we should all be worried.

Senator Rand Paul (R-Ky.), also seeking the 2016 GOP presidential nomination stated earlier this week that he will take a stand for liberty.

Surely to piss many in the Senate from Mitch McConnell down, Paul intends to filibuster the Freedom Act bill when it hits the Senate floor.

“I’m going to lead the charge in the next couple of weeks as the Patriot Act comes forward,” he said in a one-on-one interview with the New Hampshire Union Leader. “We will be filibustering. We will be trying to stop it. We are not going to let them run over us. And we are going to demand amendments and we are going to make sure the American people know that some of us at least are opposed to unlawful searches.”

Well that’s Rand Paul leaving Ted Cruz and other so-called lovers of liberty behind on the liberty scale. 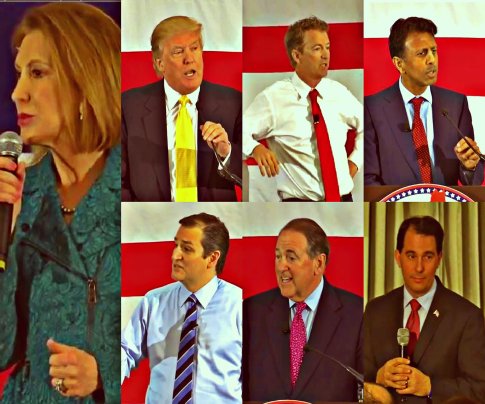 Next year’s Republican presidential hopefuls, among others converged upon the Republican Leadership Summit that took place this weekend in Nashua, New Hampshire.

Below are videos of speeches, some of which are followed by a Q&A session of those individuals attending Day 2 attended of the conference. Among them were Carly Fiorina, Donald Trump, Ted Cruz, Rand Paul, Bobby Jindal, Mike Huckabee and Scott Walker.
CARLY FIORINA