I can only hope that you weren’t drinking or eating anything when you’re eyes fell upon the title of Sarah Noble’s latest article.

Hmm, now that I have finished cleaning up the keyboard to my laptop, let us move on shall we.

Noble, as usual, speaks truth to power.  Karma is on its way.  Senator Elizabeth “Fauxcahontas” Warren’s chickens are coming home to roost.  Enjoy.

Pocahontas Warren has gotten away with lying for decades. Not only does she get away with it, she is lauded for her many Socialist ravings and achievements like the fascist Consumer Financial Protection Bureau.

Elizabeth Pocahontas Warren claims to come from “Oklahoma’s dust-bowl.” She said she was poverty-stricken, when, in reality, she drove an MG in high school. She only traded in her BMW 528i for a Ford hybrid just before the senatorial campaign began when she was running against Scott Brown.

Socialist Warren is a 1%er who lives in a $2 million plus home.

She claimed to be a foe of foreclosures and “house flipping” yet it came to light that in 1993 she bought a home for $30,000 and then flipped it 5 months later for $145,000! Warren and her husband flipped quite a few houses.

She bragged that she “crafted the intellectual foundation for Occupied Wall Street” and would protect us from the evils of capitalism, but she actually obtained huge donations from numerous liberal Wall Street backers!

Elizabeth Warren described herself in law-school professional directories as a Native American minority from 1986 to 1995. She said she listed herself as Native American to get invited to luncheons but took it off when none of that happened.

Warren was listed as a “woman of color” in the 1993 Harvard student journal. When questioned about it in 1996, Warren couldn’t remember any of it, but when she was listed as the Harvard Law’s “first woman of color” in a 1997 law review piece on diversity and affirmative action, it was based on a “telephone interview with Michael Chmura, News Director, Harvard Law (Aug. 6, 1996)”[…]

Dirty, wicked and unscrupulous Maxine Waters is running her mouth so much that her brain can’t keep up with her twisted realities.

Hyper-liberal Congresswoman Maxine Waters left audience members and television viewers scratching their heads on Friday; confusing Mike Pence with Russian President Vladimir Putin and calling for the impeachment of the Vice President for absolutely no reason.

The Trump-hating liberal was speaking with the View when she was asked about her previous tweets, alleging Vice President Pence was “planning his inauguration” alongside outgoing Press Secretary Sean Spicer in the wake of Robert Mueller’s never-ending investigation of President Trump.

“Vice President Pence is already planning his inauguration. Is that a joke or do you really think that?” asked the host….

After viewing the following video, you may find yourself wondering just who are the most dangerous men in the world?

Undeniably George Soros is number one and Amazon CEO with now owner of the Washington Post, Jeff Bezos, number two.

Jason Bermas discusses Amazon’s Jeff Bezos, his relationship to the CIA, his ownership of the Washington Post, his technology investments, and much more.

CHEATER and Progressive candidate, Jon Ossoff, can’t vote for himself.

For some reason, these tidbits of information tend to surface rather late in the game. H/t Wayne Dupree.

Candidate, John Ossoff, cannot (won’t say will not, after all he’s a Progressive) vote for himself in today’s special election because Ossoff does not live in the district where the election is being held.

Osoff does not live in 6th District.

According to Osoff, he grew up in the community and it’s his home except that it is not and being a Progressive, everything else is irrevelant so long as the Progressive endgame is achieved.

Jon Ossoff, the Democratic candidate for Georgia’s 6th Congressional District faced questions on CNN Tuesday on the fact that he could not vote for himself due to residency issues.

‘Mr. Ossoff, is it true that you cannot vote for yourself?’ New Day host Alisyn Camerota asked.

‘I grew up in this district. I grew up in this community,’ Ossoff said. ‘No one knew there was going to be an election coming. I’ve been living with Alicia, my girlfriend of 12 years, down by Emory University where she’s a full-time medical student….’ 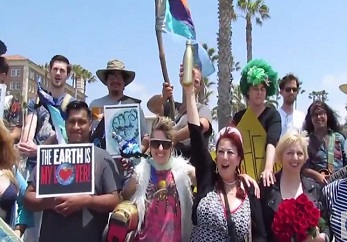 At least transgenders are simply confused, and a bit of therapy would help out. These people are just bat guano insane, and nothing can be done except to isolate them from sane people.

( Campus Reform ) Earlier this month, a professor at Santa Monica College led students in an ‘EcoSexual Sextravaganza’ in which participants ‘married the ocean.’ Amber Katherine, a philosophy professor who helped organize the May 14 event, explained to Campus Reform that the purpose of the “wedding” was to bring about a deeper love for the planet through “ecocentric passion and even lust.”

The ceremony began with Bruce Cartier, a former SMC student, proclaiming to those gathered at Santa Monica Beach that “today we stand upon this holy earth and in this sacred space to witness the rite of matrimony between the sea and us all.”

Continue Reading — Ecosexual Students Marry The Ocean Or Something

Great Scott, the loony left NEVER wastes an opportunity to be, what? MORE LOONEY.

Does this mean that they will give up drinking water or is it all part of that love thang with the sea? (sarcasm)

A former curator of Facebook’s trending news section has revealed that the company purposely suppresses content from blacklisted outlets including Breitbart News, despite Breitbart remaining in the top 25 most engaged publications on the social network for 6 months in a row.

The trending news section is located on the right-hand side of Facebook’s homepage, and it links to the world’s most popular and curated news headlines, frequently updating to provide a top news bulletin for Facebook’s over 1 billion users. In an interview with Gizmodo, numerous former curators who wished to remain anonymous discussed the working environment at Facebook’s news department and revealed that certain news outlets were favored among others.

“It was clear that Zuckerberg could squash the project at any moment,” said one former curator. “We weren’t treated as individuals. We were treated in this robot way,” said another.

Curators were “told to select articles from a list of preferred media outlets that included sites like the New York Times, Time, Variety, and other traditional outlets. They would regularly avoid sites like World Star Hip Hop, The Blaze, and Breitbart, but were never explicitly told[…]

Facebook is politically biased and since they avoid World Star Hip Hop, I am sure that there are those who levy allegations of racism against the Progressive entity.

On a personal note, I do not engage with Facebook’s “trending news ” box located near the upper right hand corner of the Facebook page and for good reason, the news is crap.

For example, below is a copy of last night’s (Tuesday, May 3) FB’s “trending news” box that is full of gossip and pure trash minus the Indiana primary.  Everything else is Facebook’s contribution to the dumbing down of America.

“The Biggest Loser?”  “James Bond?”  I mean let us be serious, Facebook.  A mind is a terrible thing to waste and that is the reason that I downloaded F.B. Purity, which Facebook loathes, to my browser.

At least with F.B. Purity, one can customize one’s FB page and timeline which clashes with FB’s algorithms and set up.

That being said, FB sucks and Zuckerberg is a creep.