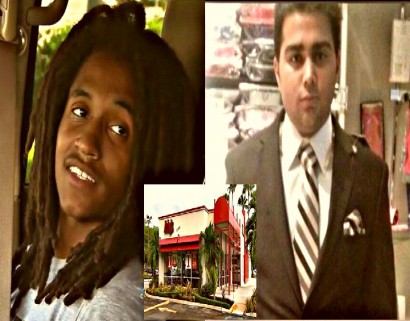 Arby’s has taken action against two employees for an incident in which a uniformed police officer in Pembroke Pines, Florida was allegedly denied service earlier this week.

The two men were working at the restaurant, 11755 Pines Blvd., when Sgt. Jennifer Martin said she was told by Mirabal that Davenport refused to ring up her order after accepting her credit card.

‘He doesn’t want to serve you because you are a police officer,; Martin quoted Mirabal as saying.

The incident sparked outrage throughout social media with demands calling for Arby’s to take immediate action against the employees. The Police Benevolent Association immediately called for a boycott of the restaurant chain nationwide.

Telling his side of the story in the video below, Davenport, a snarky 19 year old when asked about the incident immediately pulls the race card, “There’s no point in talking…because I’m 19 and she’s an officer…and I’m colored.”

Towards the end of the video, Davenport’s grandfather, Thomas McCutcheon, in defense of his grandson says, “And somebody made a joke and she just didn’t take it the right way.”

Mirabal says that his termination is “not fair,” it was a joke.

McCutcheon is seeking a meeting with Sgt. Martin and her superior in the hopes of “exonerating” his grandson. In the meantime, Arby’s “management wrote down all that he [Davenport] had to say, and decided that they will make a decision later on if they will permanently terminate him or if he’s just suspended,’ said McCutcheon. ‘All I want to do is clear his name and to get an apology in paper that he did not cause this problem.” Source: WSVN.

The Pembroke PD who considers the matter closed has received an outpouring of support from the community it serves.

Moreover, the Arby’s incident has triggered an outpouring of support from the competition, from McDonald’s to Whole Foods who put out a spread for the officers in addition to providing coffee and Dunkin’ Donuts.

Note: In addition to its CEO, Paul Brown’s written apology and the action taken so far, Arby’s will give free combo meals on Friday (“Law Enforcement Appreciation Day at Arby’s) to “officers who show up in uniform at any Arby’s in Broward or Miami-Dade” counties.