Last month, the Congressional Progressive Caucus introduced the Pay Workers a Living Wage Act, which if passed by 2024 would increase the minimum wage to $15 per hour.

“The federal minimum wage has been a stagnant $7.25 for far too long, forcing workers to juggle multiple jobs while barely making ends meet. For years, the CPC and progressive groups like Fight for $15 and Good Jobs Nation have fought for workers’ right to a living wage and have continued to show how low wages impact the daily lives of working families.”

“The Raise the Wage Act shows the Democratic Party is unified in committing itself to workers and addressing the economic hardships families are facing every day….

Big talk coming from those who held all three executive branches of government through 2012 and did not act. In fact, the subject of raising minimum wage did not come up until 2013 after Progressives lost both Houses. 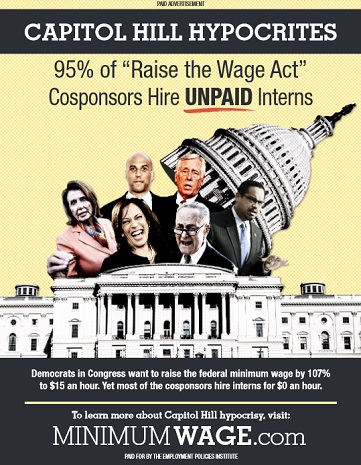 Those who threw their weight behind the Fight for $15 agenda, sponsored and co-sponsored the Pay Workers a Living Wage Act are hypocrites. Pursuant to an analysis by Employment Policies Institute (EPI), 95% of Progressives in both Congress and the Senate who support the legislation to force corporations to pay their workers $15 per hour do not pay their interns.

According to EPI, 174 out of 184 “cosponsors and primary sponsors” of the Pay Workers a Living Wage Act, hire unpaid interns.

“It’s hypocritical to rally for a $15 minimum wage when these lawmakers don’t pay their own entry level employees a cent,” said Michael Saltsman, EPI’s managing director. “Policymakers might object to paying interns because it will reduce the number of available opportunities–but the same dynamic applies in the private sector, where businesses are forced to cut staff or close down.”

Sen. Brian Schatz (D., Hi.), Sen. Mazie Hirono (D., Hi.) and Sen. Tim Kaine (D., Va.) offer stipends or some assistance but they are only under certain conditions or to cover expenses like travel or housing.

Sen. Patrick Leahy (D., Vt.) said stipends are often available but they are not guaranteed….