Heraclio “Laco” Osorio-Arellanes, the suspected shooter of Border Patrol Agent, Brian Terry back in 2010 was finally apprehended yesterday thank to as U.S.-Mexico law enforcement task force. Osorio-Arellanes who was detained at a ranch at the border of Sinaloa and Chihuahua in Mexico used a firearm supplied by the U. S. government in Operation Fast and Furious.

A $250,000 reward had been sought for information leading to the arrest of Osorio-Arellanes, who was captured at a ranch on the border of the Mexican states of Sinaloa and Chihuahua. U.S. authorities have said they will seek his extradition….

Four members of the “rip crew” already been sentenced to jail time in the U.S. Manual Osorio-Arellanes was sentenced to 30 years in federal prison after pleading guilty to first-degree murder in February 2014[…]

It took six years, three months and a new administration before Osorio-Arellanes was apprehended. One more to go, i.e., Jesus Rosario Favela-Astorga, is possibly still at large.

ICE Special Agent Jaime Zapata, shot and killed in the line of duty February 15, 2011 after being forced off the road by 10 members of a Mexican drug cartel. (Credit: U.S. Immigration and Customs Enforcement)

On Thursday, March 9th, the Full House Committee on Oversight and Government Reform held a hearing: Reviewing ATF’s Failures in the Death of ICE Agent Jaime Zapata. See footage and information below.

Suggested reading on the death of Agent Zapata and what is alleged to have unfolded: Agent Zapata by Mary Cuddehe, Atavist Magazine 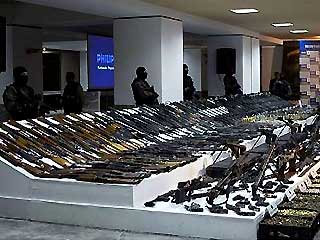 Soldiers stand guard around a presentation of arms captured in arrest of Jaime Gonzalez Duran, alias ‘El Hummer’ in Mexico City in November, 2008.

Chairman Jason Chaffetz released the following statement on the documents:

“Transparency should not require years of litigation and a court order. These documents illustrate the lengths to which this administration went in order to limit and block access to subpoenaed information. Calculated efforts were made by senior DOJ officials to obstruct Congress. This attempt to prioritize a political agenda ahead of facts is unsettling and unacceptable.”

The Fast and Furious operation was responsible for allowing approximately 2,000 firearms to illegally flow into the hands of criminals, including Mexican drug cartel associates. On December 14, 2010, Customs and Border Patrol Agent Brian Terry, a United States Marine, was killed while on patrol just miles from the Mexican border. The firearms found at the scene were semi-automatic rifles that were allowed to walk as part of Operation Fast and Furious.

Congressional Republicans have investigated Fast and Furious since January 2011. Over the course of the investigation, the Justice Department has provided false information, stonewalled document requests, produced scores of blacked-out pages and duplicate documents, and refused to comply with two congressional subpoenas.

In August 2012, the U.S. House of Representatives Office of General Counsel filed suit against the Justice Department.

Or you can view the documents at the links below: 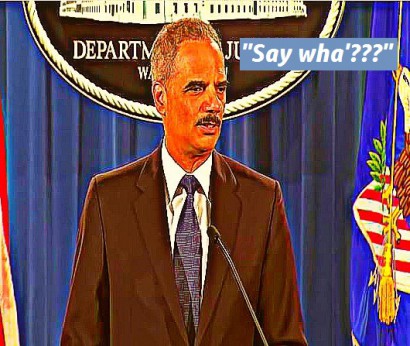 According to the L.A. Times, Soofi wanted to purchase a 9-milimeter pistol, but knew prior misdemeanor drug and assault charges would be flagged in the federal screening process. Soofi, thus, went to Lone Wolf Trading Co., a shop known to sell firearms illegally.

The Phoenix gun shop, however, was part of the botched Fast and Furious operation, the L.A. Times reported. Federal authorities were allowing Lone Wolf to sell illegal firearms with the hope of tracing the weapons to drug cartels and smuggling networks….

Let’s see here. Barack Obama and Eric Holder arming jihadists and complicit in the murders of our border agents and other Americans killed with firearms procured courtesy of the most corrupt administration in the history of the United States. Can we throw the gun runners in prison now or is that line of thinking racist?