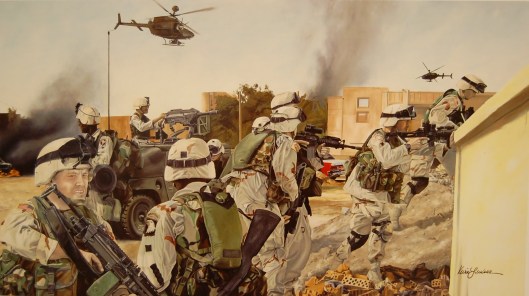 While I am proud of the New York Giants and commend their victory, I am not overly thrilled about today’s tickertape parade.

Don’t get me wrong, I believe that the NY Giants are deserving but the double standard being applied here is too much for me to digest.  In fact, it downright repulses me.

When queried just several weeks ago about a tickertape parade through the Canyon of Heroes for our troops and celebrating the official end to Operation Iraqi Freedom, Bloomberg officials responded, that they would be more than happy to plan a big celebration.  Pentagon officials responded, “they haven’t been asked to plan one.”

“…Two New York City councilmen, Republicans Vincent Ignizio and James Oddo, have called for a ticker-tape parade down the stretch of Broadway known as the Canyon of Heroes. A similar celebration after the Gulf War was paid for with more than $5.2 million in private donations, a model the councilmen would like to follow.

Mayor Michael Bloomberg said last week that he was open to the idea but added, ‘It’s a federal thing that we really don’t want to do without talking to Washington, and we’ll be doing that.’

A spokesman for the mayor declined to elaborate on the city’s reasons for consulting with Washington. Ignizio said he had been told by the mayor’s office that Pentagon officials were concerned that a celebration could spark violence overseas and were evaluating the risk.

Navy Capt. John Kirby, a Pentagon spokesman, said that he has not heard that issue raised and that New York has yet to make a formal proposal….”

Double talk aside, another excuse being floated about is that the Obama administration is concerned with criticism by those who believe that the USA left Iraq too soon. (Yeah, I know.  It is always about Obama.)

To the nimrods in the White House and City Hall, there are those of us who can see through you B.S. clear across America.

Our troops from Iraq, Afghanistan and other locations across the globe deserve to be treated as the heroes they are.

Respect our heroes!  Honor them!  Acknowledge them!  THEY ARE THE BEST IN THE WORLD!!!!!!!

This is about welcoming home our heroes and acknowledging their service, while thanking them, their families, friends and loved ones for their sacrifice as well not about appeasing your thankless Progressive base of zombies.

P.S.:  As I watched the above video closely, it occurred to me that much of this is about the Marxists ruling elite in this country undermining our military.