Barack Obama, envious of President Donald J. Trump’s legacy after just one year in the White House and the elimination of his unconstitutional and anti-American executive orders attacked Fox News and its viewers again.

According to the malignant narcissist, viewers of Fox are “living on a different planet.” Obama wants to keep Americans in their dark about his criminal cabal and activities during the time that he besmirched the Oval Office.  If only Fox viewers would watch NPR instead.

NPR, like CNN, is part of the Communist media complex who along with their comrades spews anti-Trump propaganda and lied to Americans for two years about the 2016 presidential election claiming until the final moments that Hillary Clinton would become the 45th president of the United States. Fakes news, propaganda, smear campaigns and espousing deep state talking are what Obama ordains real news. It’s not.

Look at it this way, Americans who do not watch Fox are in the dark about Obama’s unmasking, members of the Trump campaign and one only knows how many Americans.

The likes of NPR hides the sins of Hussein Obama from his body count to Uranium One, Operation Fast and Furious to his role in the non-existent Trump/Russia collusion narrative.

The left does not want to know because they can’t handle the truth.

For more on this war on Fox News and its viewers, check out: Obama Says Americans Who Watch Fox News are “Living on a Different Planet”. Yeah. It’s Called Reality.  by KJ at Kingsjester’s Blog.

Message to Obama: Sorry Obammy, we’re not the ones wearing the blindfolds and kool-aid is not in our diet.

Besides, Obama should be more concerned and I bet he is which explains his attack on Fox News viewers, about the shoe(s) that are about to drop exposing the sins of Obama.

Why they still send me emails escapes me.  I have unsubscribed from these sites so many times that I have lost count.

I received this email just moments ago from “Diana (Habibah) Brown (Abdul-Shaheed)” <dccc@dccc.org>

Check out what the Democrats are up to this afternoon.

If the Republicans had their way, wed only be left with the likes of Glenn Beck, Rush Limbaugh and Sarah Palin to dominate the airwaves.
We cant let this outrage go unchallenged. Republicans and their right-wing media backers are gearing up for this fight, and theyre hoping grassroots Democrats like you will stay on the sidelines.

ARE THEY FOR REAL?  DEFUND NPR AND DEFUND THEM NOW.

P.S.  Eric Cantor is speaking on the subject of defunding NPR at this moment.

Senior Director of NPR Betsy Liley says she may be able to shield from a govt audit $5mm donation from a reporter posing as a donor from Muslim Brotherhood front group.

NPR Officers: Climate change deniers will only …, posted with vodpod

For the record, global warming has always been political thanks to Progressives.

At 2:06 of the video, the discussion takes an interesting turn pertaining to Obama’s birth certificate.  Can it be that NPR is suspicious about the One as well?

“James O’Keefe, the controversial, undercover, conservative filmmaker, has released his company’s (Project Veritas) latest video today. This time, his group’s targeting publicly-funded NPP and catches one of the news outlet’s executives saying some suspect things. The video is sure to get some attention, but it’s not bulletproof, and there could be cause for concern.

To be sure, one of the NPR executives on the video, Ron Schiller (president of the NPR Foundation and senior vice president of development), is caught making damning statements. He calls the Tea Party ‘racist,’ decries the ‘anti-intellectual’ GOP, and claims liberals “might be more educated.”

Well James O’Keefe (lol) has done it again.  NPR is falling over itself desperately trying to discredit O’Keefe while covering their rear. No matter how hard they try, Senior Vice President of Development Ron Schiller and company put their own two feet into their mouths on their own while espousing their disdain for fellow Americans merely because we oppose their Progressive views.

Every word from Schiller’s mouth represents the viewpoint and mentality of NPR and staff.  Besides, no one twisted their arms to get them to say anything.

The words and views of these two NPR executives confirm that NPR should not receive one penny of government funding.

Below is the 2.0 hour version unedited version of the video.  However, if for some reason you are unable to view it on this site, please check it out at Project Veritas, here.

NPR media correspondent, David Folkenflik has been tweeting in an attempt to cover NPR’s flank.  According to Folkenflik, Ron Schiller is leaving NPR but his departure has nothing to do with the Project Veritas’ video expose of NPR.  Yeah right.  Schiller will be working in Colorado for Aspen Institute, another Soros funded entity.

Then two tweets further down, you will see another tweet wherein Folkenflik mentions that NPR did not accept any money from the fraudulent organization, as if that matters. 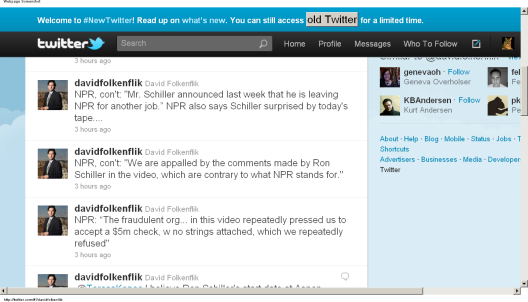