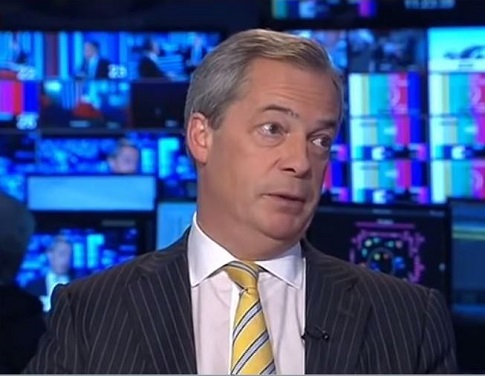 UKIP leader Nigel Farage has said that people have overreacted to Donald Trump’s comments on Muslims, and it would be absurd to ban him from entering the UK.

Speaking on radio station LBC this morning, Mr Farage said any ban on the Republican frontrunner entering the UK would be ludicrous is now “part of the democratic process of the West” and “could be the next President of America.”

Those who have signed a petition calling for the UK to ban Mr Trump, he said, are “the same group of people who it seems want to ban everyone from coming into Britain,” comparing them to student activists who want to “no platform” everyone they disagree with.

Click Here To Read The Rest of: Nigel Farage: People Have Overreacted To Trump, He Is ‘Part Of The Democratic Process’

The following interview with Farage took place three months ago on the subject of the so-called migrant crisis (invasion really), open borders and the Syrian refugees.


H/t to my friend, Donna over at Talk Story.

Why on earth would Barack Obama and fellow Progressives want to move the USA into the European Union.  Let them take the EU, global governance, the New World Order or whatever they name of the day and shove it.