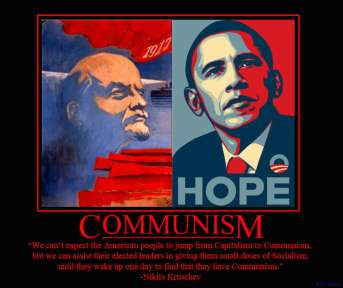 Wake up sheeple. No to Barack Obama is NO to COMMUNISM!

Communist Party Endorses Obama For 2012 By Aaron Klein, World Net Daily It may be early in the campaign season, but the Communist Party USA already has seen fit to endorse Barack Obama for the 2012 election. While noting he is disappointed with “some aspects” of the Obama administration’s domestic and foreign policy, Sam Webb, chairman of the Communist Party USA, threw his support behind Obama’s re-election bid. Read more: http://www.wnd.com/inde … Read More