Net Neutrality is “a solution that won’t work to a problem that doesn’t exist,” says Ajit Pai, a commissioner at the Federal Communications Commission (FCC).

Net neutrality brought to you by the same people that said, “You have to pass the bill to find out what’s in it.”

Are you mad yet?

There’s an Internet Protest Underway today to fight ending Net Neutrality.. Here at Grumpy Opinions, we didn’t know about until this morning, or we would be participating.. Since we didn’t know about it, we had no way to warn our readers in advance, and thought it would be unfair to spring it on you with no warning.

Before we go any farther, scattered across the internet roughly Ten Million websites use the WordPress Platform. There are two distinctly different types of websites that use the WP Content Management System. WordPress Dot Com is a free hosting service offered by WordPress. Then there is self hosted WordPress, self hosted sites, like Grumpy Opinions use the WordPress system but pay for their own hosting and are not subject to some of the restrictions imposed by WordPress Dot Com.

I subscribe to a website called WP Tavern, it specializes in WordPress News.. This morning I had an early-early morning email from them, I clicked on it and found:

Today, those who support internet freedom are simulating serving pages at a snail’s pace, in protest of internet service providers that are currently spending millions of dollars lobbying for the FCC’s proposed rules which essentially eviscerate net neutrality.

I din’t know a thing about it until this morning..

For self hosted WordPress Sites participation is voluntary, that may not be the case for WordPress Dot Com sites.. Puma has both a Self Hosted Site and a WordPress Dot Com Site, she told me this morning her Dot Com Site had a massage about Net Neutrality and wasn’t loading right. I have’t looked to see how it’s affecting some of the other big players Sarah Gooding mentioned..

If Net Neutrality comes to an end, so will most of the websites you currently enjoy…

Continue Reading – If Some Of Your Favorite Websites Are Acting Strange Today, Here’s Why

Defund the FCC! Americans have had it with Obama’s czars and regulatory commissions.  Defund them all and vote out the others Republicans who did not sign off on the letter to the FCC.

“Thirty senators have signed a letter making it clear that should the Federal Communications Commission implement ‘net neutrality’ regulations during its December 21st meeting, the GOP will force a confrontation on the Senate floor over the rules. Doing so would provide insight into how Republicans, as a minority in the Senate, leverage its control over the House of Representatives to hamstring attempts by the executive branch to rule by regulatory fiat.

The letter questions the ability of the FCC to impose the regulations:

‘You and the Commission’s general counsel have admitted in published statements that the legal justification for imposing these new regulations is questionable and “has a serious risk of failure in court.” It is very clear that Congress has not granted the Commission the specific statutory authority to do what you are proposing. Whether and how the Internet should be regulated is something that America‘s elected representatives in Congress, not the Commission, should determine.’” 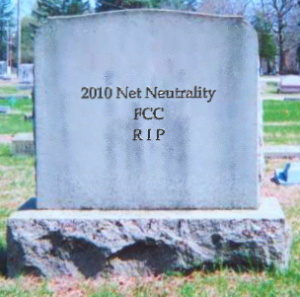 With the nation’s economic recovery still in uncertain territory, opponents to the FCC’s redesign of the broadband regulatory regime point to regulation fatigue as the critical precursor of Democratic losses Tuesday.

‘Candidates who support creating burdensome new Internet regulations were handily rejected at the polls,’ a blog post at Broadband for America (BfA) reads. ‘The message from voters is that unnecessary regulation is a losing tactic.’

The reclassification bid was so noxious that the groups faced opposition even from Democrats. At least eight-five House and Senate Democrats expressed reservations with the FCC reclassifying broadband.

All it took was for patriots to say NO and stand together in America on Election Day, and in that one day, net neutrality was gone.  Such a beautiful story to tell and it is only the beginning of what we can accomplish patriots.  We are a good fit.  The founders would have been pleased this week.

Of course, the socialists and communists are not taking time to lick their wounds.  They consider our success an anomaly and are at the drawing board as I type revamping their plan of attack.  No time for us to rest either, we must remain focused and vigilant.

Amazing how upset Obama gets over caricatures that depict him as Adolf Hitler when he presents himself as the living embodiment of the dictator.  This far too much power for this tyrant.

“A US Senate committee has approved a wide-ranging cybersecurity bill that some critics have suggested would give the US president the authority to shut down parts of the Internet during a cyberattack.

Senator Joe Lieberman and other bill sponsors have refuted the charges that the Protecting Cyberspace as a National Asset Act gives the president an Internet ‘kill switch.’ Instead, the bill puts limits on the powers the president already has to cause ‘the closing of any facility or stations for wire communication’ in a time of war, as described in the Communications Act of 1934, they said in a breakdown of the bill published on the Senate Homeland Security and Governmental Affairs Committee website.

The committee unanimously approved an amended version of the legislation by voice vote Thursday, a committee spokeswoman said. The bill next moves to the Senate floor for a vote, which has not yet been scheduled.

The bill, introduced earlier this month, would establish a White House Office for Cyberspace Policy and a National Center for Cybersecurity and Communications, which would work with private US companies to create cybersecurity requirements for the electrical grid, telecommunications networks and other critical infrastructure.

The bill also would allow the US president to take emergency actions to protect critical parts of the Internet, including ordering owners of critical infrastructure to implement emergency response plans, during a cyber-emergency. The president would need congressional approval to extend a national cyber-emergency beyond 120 days under an amendment to the legislation approved by the committee.

The legislation would give the US Department of Homeland Security authority that it does not now have to respond to cyber-attacks, Lieberman, a Connecticut independent, said earlier this month.

‘Our responsibility for cyber defence goes well beyond the public sector because so much of cyberspace is owned and operated by the private sector,’ he said. ‘The Department of Homeland Security has actually shown that vulnerabilities in key private sector networks like utilities and communications could bring our economy down for a period of time if attacked or commandeered by a foreign power or cyber terrorists.’

Other sponsors of the bill are Senators Susan Collins, a Maine Republican, and Tom Carper, a Delaware Democrat.”