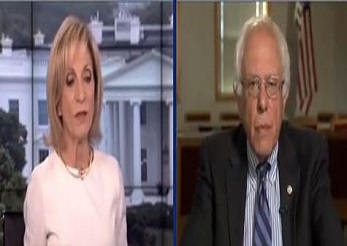 Sen. Bernie Sanders will be dismissed no more. At least that’s the message Sanders delivered today on The Mitchell Report when host, Andrea Mitchell mentioned the negative impact of Sander’s continued presence in the Democratic primary and how it will negative impact Hillary Clinton (who I believe is doing enough damage all by herself but that’s another post.

Sanders interrupted Mitchell in the middle of her spiel, reminding Mitchell of his 19 wins and ongoing battle with the Progressive establishment. Talk about setting the record straight, an enjoyable moment even for those of us who are not supporters of crazy Communist, Bernie.

RUSH TRANSCRIPT:
MITCHELL: “Isn’t the bomb ohm line that she is now fighting a war on two fronts, getting beaten up by Donald Trump on a daily sis. He has been embracing you, building you up. She’s fighting Donald Trump and Bernie Sanders.”
SANDERS: “Andrea, no, I don’t accept that proposition. Last I heard Hillary Clinton is running for president of the United States. I am running for president of the United States. Trump is running for president of the United States. I have gotten attacks and attacks and attacked. The issue of this campaign is to go out to the American people and talk about why the American people are ING and struggling. We have to make that case. That’s what we intend to do.”
MITCHELL: “I’m just saying, sir, that the oppositions have been built up by Donald Trump hammering at her. Up until now he has not been going after you as much. She is fighting two candidates and you’re fighting one.”
SANDERS: “Andrea, in every state we have one, in 19 states we have had to take on the entire democratic establishment. We’ve had to take on senators and governors and mayors and members of Congress. That’s what we have taken on, so please do not moan to me about Hillary Clinton’s problems. I’m in this race to win. We’re taking on the democratic establishment, standing up for working people and we have a shot. It is a steep hill to climb but we’re going to fight for every last vote we can get, every delegate we can get.” 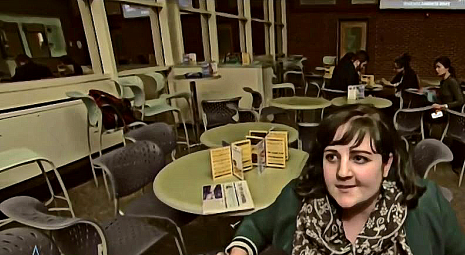 The cracks in the Progressive tent are clearly visible as young women in New Hampshire are rejecting Hillary Clinton’s use of the gender card to get elected.

Revelations that some of today’s feminists are not drinking Hillary’s kool-aid (they’d rather get”berned” instead) have caught MSNBC propagandists off guard.  Talk about bewildered!

Young women in New Hampshire were offended by the way Hillary Clinton uses her gender to garner support, an MSNBC survey revealed Friday.

When MSNBC anchor Tamron Hall asked young female voters about Hillary Clinton’s claim on Wednesday that she is not an establishment candidate because she is a woman, they responded negatively.

One of the respondents said that she did not like how Clinton assumed that her feminism was identical to the feminism of all women.

“I also am a woman. I also face discrimination as being a woman. Her feminism does not represent my feminism, and I think it’s really important to differentiate that,” one young woman said. Her complaint is a common one among young women and reveals a generational divide within the Democratic Party.

The mainstream media sunk to its lowest in American history today (really) when MSNBC and CNN entered the home of the deceased San Bernardino Islamic terrorists and had a free for all totally destroying and contaminating the crime scene.

As reported by Breitbart:

UPDATE: Reporters on the scene would not tell Breitbart News if they had permission to dig through the apartment. During a press briefing, the F.B.I. spokesman said they had cleared the scene. 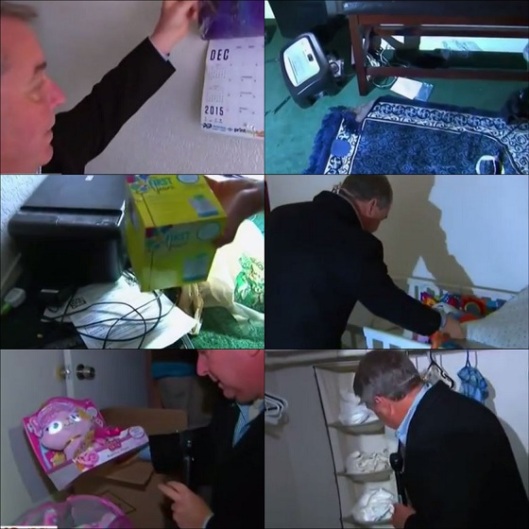 Who cares if FBI who reports to the Muslim-in-chief said that the crime scene had been cleared? All one had to do was view the interior of the apartment from a distance to conclude that there was so much more to be processed. After all, there were ids, boxes of documents, etc. all over the place. There is no way on earth that the processing of the crime scene had concluded. NO WAY!

That and the fact that the mainstream media had no problem airing their disgusting deeds live on the air as they defiled the crime scene.

Who is responsible for what will now turn out to be another cover up under the Obama administration all of whom stand with the Muslim?

One of the most bizarre and possibly irresponsible and craven scenes in media history just unfurled on MSNBC and CNN as reporters from both networks (and a handful of others), during a live broadcast, toured the apartment of the San Bernardino Islamic terrorists. While a MSNBC reporter rummaged through the deceased terrorists’ closets and boxes and photo albums, Andrea Mitchell reassured viewers that the disturbing scene was okay. “The landlord told us authorities were done with the crime scene,” she said.

According to the landlord, though, this was not the case. When he opened the door, reporters rushed into the apartment, possibly contaminating one of the most important crime scenes in years….

The most despicable display of bad journalism that I have witnessed in my life was brought to Americans courtesy of MSNBC who apparently was going for Pulitzer but missed it by at least eight hundred miles.

The Washington Examiner said it best.

What could have been a chilling look into the shocking “normalcy” of the couple’s home quickly devolved into parody-like commentary from correspondent Kerry Sanders. Sanders provided such hard-hitting analysis as “it’s just a typical sort of calendar” and “here’s just some mixed nuts….”

“I don’t actually see a lot a dust in here, but…you can see…the hard drive is gone.” Fire that damned MSNBC reporter Kerry Sanders and freaking Andrea Mitchell! “What kind of computer equipment?”

The person seen prying his way into the suspects' apartment is a reporter, not the landlord. He is @TobyHarnden. pic.twitter.com/DErcyEYZSg

San Bernardino Sheriff's spokesperson to Grasswire on reporters entering apartment: "That is not a cleared crime scene."

Me: “Are you watching what we’re watching on TV?” San Bernardino Sheriff’s Bozek: “Oh yeah, I am. That — I don’t know what’s going on." 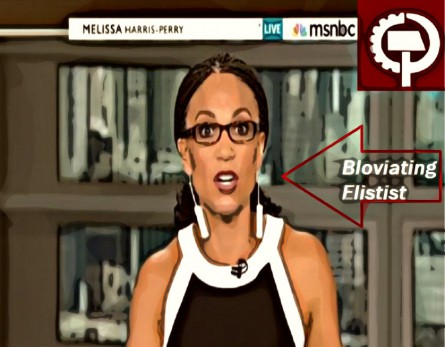 Melissa Harris-Perry Needs a Trip to Hard Work U by MichelleMalkin.com

MSNBC’s Melissa Harris-Perry is the cable TV pioneer who broke the tastelessness barrier for feminists by wearing tampons as earrings on air in 2013. This week, she made ignominious history again — as the race-baiting fool in an ivory tower bubble who believes the words “hard worker” are a slur against black slaves and moms who don’t have health care.

Caution: You may need a double dose of Excedrin to protect yourself from her brain-splitting nonsense….

For people struggling to get out of poverty and break the cycle, Harris-Perry regurgitates Progressive talking points, i.e., the message is that working hard will not get one out of poverty nor is it expected, so don’t bother.

It is after all financially beneficial to Harris-Perry and so many others that those living below the poverty level remain there. Yet they have the audacity to blame Republicans.

Lynette “Diamond” Hardaway and Rochelle “Silk” Richardson aka The Stump for Trump Girls aka WeBeSisters are calling out MSNBC’s Steve Kornacki for disinviting them to appear on to his weekend program.

The last minute cancellation occurred after the sisters refused to impart personal information such as the names of their children and employers to MSNBC. 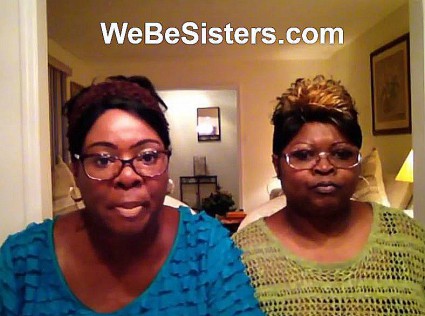 At the very last second, he uninvited us when we wouldn’t provide the name of our employers, and deep personal information. Why he need that? So he could do a hit piece on us! So after dedicating 4 hours to be on his show, he cancelled us because we want to protect our privacy. They try to spread hate about Trump at MSNBC, and now they try to do it to us. But we don’t play that game, we fight fire with fire!

As my mother (God rest her soul) used to say, “These ladies don’t take NO tea for the fever.”

For the record, as noted on the about page of their website, the Lynette “Diamond” Hardaway and Rochelle “Silk” are Democrats who “want to see America great again and that’s why we be on the stump for Trump. Before you go asking the nonsense question, let us give you the straight up answer… NO, we are not paid by Mr. Trump or anyone connected to his campaign!”

In addition, their support of Trump, running as a Republican proves that not everyone on the left is asleep and debunks the myth that only Republicans support Donald Trump and as I have often heard from stupid American voters here in NYC, Caucasians.

Considering MSNBC’s actions, it is safe to say that Progressives in both parties fear Donald Trump.

I ran across the video at the bottom of this post of Melissa Harris-Perry and comrades over at MSNBC performing their usual schtick. Given the title of the post, I had to force myself to watch but I am glad that I did.

The video begins with Melissa Harris-Perry showing clips of politicians from both parties speaking before Black crowds.

From Joe Biden to Hillary Clinton, each politician adapts his or her lingo speaking before the audience in what is both insulting and painful to watch.

Then Perry brings Senator Rand Paul into the discussion. Interesting enough, Paul is himself, which surprisingly Perry points out in a good way.

The discussion begins at 2:40 and it is quite interesting in that all admits that Paul is addressing concerns that even Progressives will not touch.

Of course, race baiter Michael Eric Dyson who has not yet gotten over the fact that in 2013 Paul actually spoke to students at Howard University (how dare he) remains true to form.

While I do not agree with all things Rand Paul, it remains certain that Paul is a threat to the Progressive establishment on both the left and the right.