After the slaughter of Justine Damond by a Somali-born Minnesota police officer Mohamed Noor, the city’s Mayor Betsy Hodges (photo above) is doubling down on the failed social justice policies shoved down the throats of America’s law enforcement by Barack Obama that lead to last week’s murder.

The shooting of Justine Damond by a Somali-American police officer with three complaints and a lawsuit against him in two years has taken an interesting political turn. The left-wing community activists are pushing for more of the Obama 21st century policing as a remedy.

A new police chief has been selected by the mayor and his background includes internal affairs.

The job demands someone “who holds officers accountable, that is a strong communicator and works well with civilian leadership, who is responsive and accessible,” said Council Member Andrew Johnson, the Star Tribune reported.

Mayor Betsy Hodges, who faces a potentially big loss in her re-election bid, has picked Assistant Chief Medaria Arradondo, a 28-year veteran of the force from a fifth generation African-American Minnesota family, to help lead the police force and make the case that she’s committed to reforming the department.

The appointment requires the approval of the City Council’s Executive Committee, but the union chief is on board and says the men like him[…]

In other words, there’ll be plenty more Somalians on Hodges’ police force.  Eric Holder and Loretta Lynch must be proud especially since Hodges last week reached out to comfort the Somalian community last week on her personal Facebook page after the shooting.

Rather than focus on crime and violence in his district, Keith Ellison is colluding with the enemy this Labor Day weekend, i.e., his Muslim Brotherhood friends.

Over the national holiday weekend of Labor Day, the Islamic Society of North America (ISNA) is assembling for its 52nd Annual Convention from 4-7 September 2015 at the Donald E. Stephens Convention Center in Rosemont, Illinois. The Muslim Brotherhood convention’s theme is “Stories of Resilience: Strengthening the American Muslim Narrative.” Per the program and screenshot below from the ISNA website, United States Representative Keith Ellison (Democrat, 5th District, MN) is slated to speak at this key gathering of Muslim Brotherhood affiliates….

One of the Texas jihadists shot and killed while carrying explosives outside of Texas Draw Muhammad Event held by Pamela Geller a few months back was radicalized in Minnesota.

The Somalian Islamic terrorist group, Al-Shabaab is thriving in Little Mogadishu, located in Ellison’s district, i.e., a jihadists hatching ground where young Somalian-Americans are radicalized and sent to Somalia to “become a mujahid, a warrior for Islam; or better yet, a shahid, a martyr.”

Rep. Keith Ellison (D-MN) has become ground zero for the threat to the United States from Islamist terror groups such as ISIS and Al-Shabaab.

In recent months, Elton Simpson, one of the two Texas gunmen, began communicating through Twitter with the Minnesota fugitive known as Mujahid Miski who is in Somalia…

In what has become business as usual in Washington, D.C., it is troublesome that no one questions Ellison’s affiliation with Islamic extremists, many of whom are speakers at the ISNA Convention. See poster below: 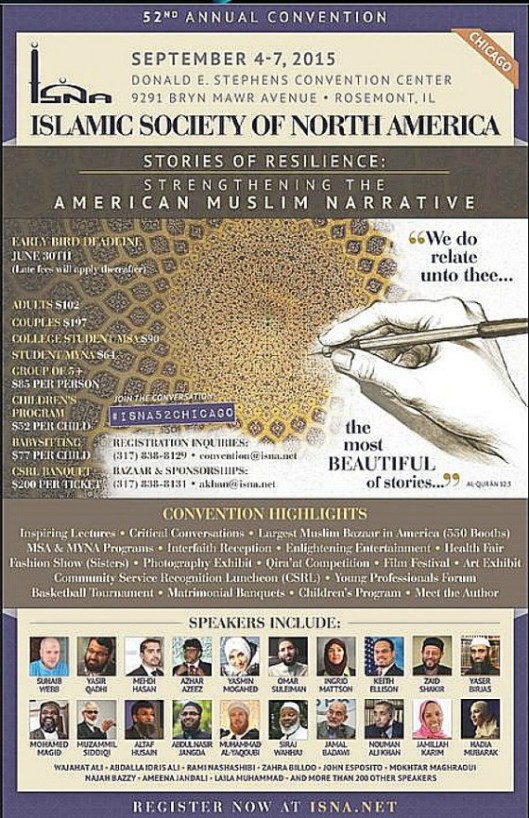 As you can see, Rep. Ellison is congregating this weekend with Radical extremists.
LINKS:
http://www.centerforsecuritypolicy.org/2015/09/05/why-is-a-sitting-us-congressman-speaking-at-a-jihadist-associated-convention/
http://www.breitbart.com/big-government/2015/05/05/the-texas-terror-connection-to-muslim-congressman-keith-ellisons-minneapolis-district/
http://www.thetower.org/article/why-are-there-jihadists-in-minnesota/