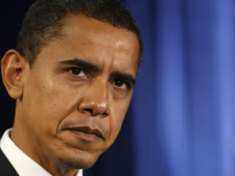 With the murders of two of U.S. federal agents, more than 300 Mexican citizens dead and countless Americans slaughtered along the U.S.-Mexican border and throughout the streets of America courtesy of Operation Fast and Furious, Barack Obama’s Department of Justice is now referring all queries pertaining to Operation Fast & Furious to the Soros funded Media Matters.

“Katie Dixon, a ‘confidential assistant’ in the Office of Public Affairs at the Department of Justice, reportedly sent an email toWashington Free Beacon writer C.J. Ciaramella that she had been directed to send him a link to Media Matters for America, which holds weekly “strategy calls” with the White House, in response to an inquiry  regarding the Operation Fast and Furious scandal…” 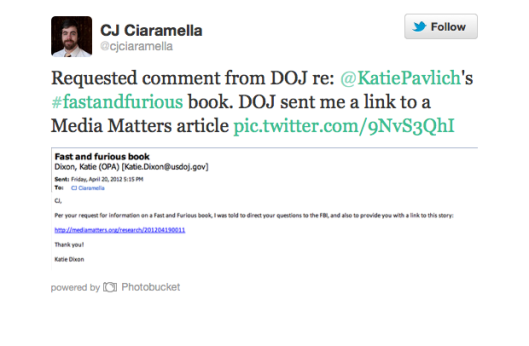 In spite of their greatest efforts, the media blackout failed miserably and after all, this is an election year.  As far as the campaigner-in-chief is concerned, Americans must at all costs remain misinformed and in the dark. 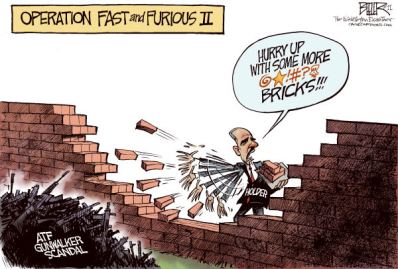 This is not only about the refusal of Obama and cohorts to take responsibility for numerous acts of treason; this is about Obama getting re-elected.

The DOJ’s hiring of Media Matters as its mouthpiece to propagandize, hinder and smear those bringing to light one of the biggest scandals in the history of the United States is appalling and a new low even for Obama.

Note that while Operation Fast & Furious is one the biggest scandals in the history of the United States, it remains one of the many scandals in the Obama administration of which there is no shortage.

While many continue to demand that Bush43 and Cheney be brought up and charged with war crimes, they remain silent when it comes to Operation Fast & Furious and the countless other atrocities committed globally under Obama, Holder, the Department of Justice, all of whom have blood on their hands.

The Al Jazeera Unplugged video below was uploaded to YouTube on May 24, 2010.

“As reported in a recent posting, Accuracy in Media presented its annual Reed Irvine Media Awards for Investigative and Grassroots Journalism amidst a trumped up controversy reported in The Washington Post, Politico and Big Journalism. Awards were presented to Sharyl Attkisson of CBS News for her investigative reporting on Operation Fast and Furious as well as Solyndra and other “green energy” projects in which the Obama administration has invested Americans’ taxpayer dollars; and Dana Loesch, Editor-in-chief of Andrew Breitbart’s Big Journalism, for her tireless work as a grassroots journalist.

The pro-Democratic Party media watchdog, Media Matters, led the effort to browbeat Attkisson and CBS into backing out of accepting the award. They claim her reporting was shoddy and that CBS shouldn’t allow her to accept an award from a partisan group, as they call Accuracy in Media. Yet as AIM’s Cliff Kincaid recently exposed, the head of Media Matters, David Brock, has created a so-called Democratic ‘Super PAC’ specifically devoted to electing Democrats and defeating Republicans…”

Every occasionally, someone on the left appears to grow a pair and takes a stand, if only for a moment. Kudos to CBS for doing just that in this instance against the Marxist propaganda machine that fails day after day to do its job objectively thereby doing the American public a major disservice.

As you know, The Daily Caller is doing an all-out expose on the Soros funded, White House directed, David Brock – Media Matters.  Feel free to check out what they have uncovered thus far, here. 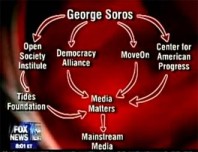 It is fair to note that Soros is not the only Progressive entity funding Media Matters whose job is to exclusive smear and destroy the right.  See The Daily Caller’s articles entitled, “Media Matters accepted $50K grant for ‘fact checking’ religious broadcasts” and “Left-wing foundations lavish millions on Media Matters.”

“Earlier today, a few of us Tea Party “sons of bitches” decided to call on the ‘debunked’ progressive propagandists at Media Matters for America (MMFA) to ask them to produce their latest IRS 990 form–the tax document that non-profit organizations are required to file annually with the IRS to maintain their tax-free status.

Unlike other tax-exempt organizations that make their latest IRS filings easily available at their own websites (such as the Media Research Center, for example), MMFA apparently wants the public to find that information for itself. Since the most recent available IRS 990 filing from MMFA covers 2009, we decided to see if they had any more recent information to provide us…”

Tea Party “Sons of Bitches” Drops in on Obama P…, posted with vodpod

No doubt such a congenial visit has left propagandist, Media Matters, stinging.

If walls could talk.  I bet these propagandists were buzzing all day overe such a bold visit by Conservatives. A great moment for the right that will no doubt send Marxists into a rage.

Of course, Media Matters posted the visit from their side of the room on Youtube.  H/t Yid W/Lid.

When discussing the media with neighbors, co-workers and even some family members, everyone acknowledges that the news is one-sided. All confess that what little news they watch, they get from CBS, NBC, ABC, MSNBC and CNN and socialist newspapers as if that is something an American should be proud of. (The curse of living in a socialist state.)

All are shocked when informed that I get my news from Fox News, Fox Business and the internet. The immediate reaction is “Fox? What would possess you to watch Fox?”

Mind-boggling is the acknowledgement of the mountains of information and events of which I am familiar and they are not (and they have the impudence to be shocked).

FULL DISCLOSURE: That which is regurgitated by these socialist news entities is not news; it is socialist propaganda, as dictated by the White House.

Never has it been clearer than it is today that the nation’s media news outlets are government run and socialists. One could even go so far as to suspect that the staff is government approved and that being a socialist is a requirement.

Besides fear mongering, spreading propaganda, deceiving the people and inciting chaos, socialist puppets are told what to report and how. As a result, the constant dosage of socialist propaganda and deceptive news reporting has turned the citizenry into a nation of blind mice and useful idiots.

When, America, will we take a stand against racers and liars? When will we stand up and tell the Obama propaganda machine to go to hell?

Time for the Main Stream Media to take the Bias out of their Reporting and Give us the Real News! I am amazed how over my lifetime I have watched the Main Stream Media‘s ability to actually shape Popular Public Opinion to their very Ideology and Agenda. From the hateful rants by the Media against Ronald Reagan and George W. Bush to the blatant Worship we now see of Barack Obama there can be no question to the fact that the Media has long since le … Read More

The truth shall set us free…..like it or not.

The cartoonists who penned the above cartoon, which by the way happens to be dead on, are being accused of racism by Progressives.   Such accusations are not only  unfounded and false, they are an attempt to silence the voice of opposition.

Talk about HYPOCRITES!  In the meantime, the nation is still waiting for Progressives to decry their fellow Progressives who loudly and openly called for the lynching of Justice Clarence Thomas.  To date, they have not.

Our Response to the Cartoon Controversy

“The media was asking for our response to calls that the cartoon is racist. So here they are:
James Hudnall:

As a classical liberal (aka Libertarian) I’m  opposed to the nanny state. The first lady has every right to express her opinions about obesity or try to bring awareness to the issue, but when an unelected official starts dictating what industries should do,  it deserves our scorn. She’s decided to tell schools what foods and drinks they can sell to kids. And now she started telling the National Restaurant Association (NRA) what they should be doing regarding portion sizes and options. When you combine her actions with recent attempts by other politicians like NYC mayor Bloomberg to legislate salt and transfats, it’s starting to come off like creeping fascism.

The government has no business intruding on citizens personal lives beyond enforcing reasonable laws. But control freaks never tire of interfering with other people’s choices and options.”

I am fed up with the double standards, hypocrisy, scheming, never-ending intrusion and constitutional violations by the Obamas and the Obama administration into the private lives of Americans.

If the Obamas are so intent upon intruding into our lives, then they had better get used to being taken to task for their Constitutional violations and acts of tyranny, of which there are many, against the citizenry.

Americans refuse to accept such assaults on our freedom, personal choices and we are simply not going to accept it.

See also:  Progressives See Racism Where It Isn’t, Ignore It Where It Exists