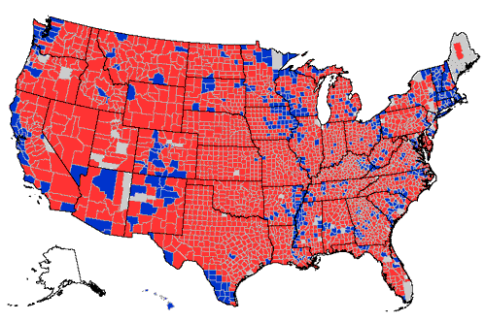 There are 3,141 counties in the United States.
Trump won 3,084 of them.
Clinton won 57.
Now look at New York State
There are 62 counties in New York State.
Trump won 46 of them.
Clinton won 16
Clinton won the NY state popular vote by approximately 1.5 million votes.
In the 5 counties that encompass New York City (Bronx, Brooklyn, Manhattan, Richmond & Queens) Clinton received over 2 million more votes than Trump, which means Trump won all the rest of New York State by half a million votes. (Clinton only won 4 of those counties; Trump won Richmond).
Therefore these 4 counties alone more than accounted for Clinton winning the popular vote of the entire country.
Those 5 counties comprise 319 square miles.
The United States is comprised of 3,797,000 square miles
When you have a country that encompasses almost 4 million square miles of territory, it would be ludicrous to even suggest that the vote of those who inhabit a mere 319 square miles should dictate the outcome of a national election.
Large, densely populated Democrat cities (NYC, Chicago, LA, etc.) DO NOT and SHOULD NOT be allowed speak for the rest of our country!
To that end, In their infinite wisdom, the United States’ Founders created the Electoral College to ensure ALL the states were fairly represented. Why should one or two densely populated areas speak for the whole of the nation?
(This “319 Square Mile” analysis is now all over the internet, but I can find no original attribution. A friend sent it to me via email, and I first posted it at UnifiedPatriots.com April 21.
(It is, of course, about the Electoral College, not the Media.
(But it guides us toward considering the larger political question as envisioned by the Democrats and the Left in pursuing their ultimate political objective, that One Ring that rules them all?.
(And what are their principal tools?)
Consider that people still pay to see “Lion King”, on stage after 22 years, while “Russian Collusion” was written and directed so poorly it closed after only one performance. Two years of commercial hype couldn’t buy it even a single Sold-Out, SRO performance, not one standing ovation, despite the lavish praise heaped on its leaked script by the majority of the sycophantic Ellsworth Toohey media who tried to drown out the alternative media calling for it to be shut down on opening night[…]

Let’s go back to the beginning, when the very first revelations came out about Mike Flynn and the Russians – February, 2017, only two weeks into Donald Trump’s presidency.

Flynn had been fired for misreporting his meeting(s) with the Russian ambassador to Vice President Pence, bringing the simmering charge of latent Russian involvement in the Dem’s election loss front and center.

We didn’t know then many things we know now, but while the media were running wild trying to connect (imaginary, it now turns out) dots between Mike Flynn’s contacts with Russians in the ordinary course of meet-and-greets, the White House was already in DEFCON mode seeking to know how the New York Times even knew Flynn had ever talked with any Russians.

Who leaked these contacts? After all, in the classified meaning of the term, they were “classified.” A criminal violation. And by April there were several more and they had gone beyond Mike Flynn.

So who was doing the leaking? This was a critical question for the barely-in-place White House. Trump’s own staff? White House holdovers? The Intel community?…of which there were several, some of their departed leaders, James Clapper and John Brennan, none too friendly to the new administration.

Then there were career bureaucrats in all those agencies who’d spent decades putting their own imprimaturs on policies that covered all the Obama years. Many of the left, some even of the hard left, almost all were card-carrying members of the Bureaucrats’ Turf Protection Society, with deep personal and professional reasons having less to do with any political cause and more to do with a nice gated retirement villa in south Florida.

They felt, and still feel, threatened by not only the possibility of a complete change in direction (and management) in their agencies, but that disgusting feeling life-long front office employees get when the boss’s daughter runs off and marries a guy who used to run the bowling alley.

This fleet of bureaucrats all watch the same news shows, (six to choose from, all the same) read the same newspapers and opinion journals, and for a full year before the election their media had uniformly served up a daily diet about the things not to like about this “clown” (per Charles Krauthammer) long before it appeared he might actually win the nomination, much less the presidency.

This was the deep state Donald Trump faced from the day he was elected, three months before he was even inaugurated. Its sheer size was the perfect cover for dark ops, for much like Agatha Christie’s “Murder on the Orient Express” – how do you trap a killer when everyone on the train has a motive?

Under these circumstances I’m sure rooting out the individual leakers inside the deep state was recognized as something Trump’s sleuths probably couldn’t accomplish. Especially in a hurry. It takes months to lay traps. And the voting public already wanted to see, from several agencies and from the bowels of the White House, a frog march to the courthouse. A march in front of a judge by a Post or Times reporter, naming his heretofore “unnamed source” inside the agency would have been nice too.

We have Progressives on video word for word, the HYPOCRITES.

Was Comey so busy showboating that he did not see his termination coming?  The signs were there.

While the Progressive media was busy having a meltdown yesterday over President Donald Trump’s firing of FBI Director, James Comey, the President launched campaign/news website, DonaldJTrump.com.

To the disdain of the media propagandists, DonaldJTrump.com bypasses the mainstream media which peddles in fake news, believes that it is their job to tell us what to think while at the same time placing a media blackout on any news coming out of the White House, Trump administration.

The website circumvents the noise and the hate to report news and events directly to the American people.

The webpage, voters are told, “delivers current and compelling information for all Americans about the president’s policies, his achievements to Make America Great Again, and his re-election campaign.”

“The new website will provide a one-stop online destination to learn the facts about President Trump’s actions that are enabling new economic growth and changing the American political landscape. New official campaign merchandise is also available on the website.”

The site will present “facts the mainstream media is hiding about policy positions and actions by President Trump; compelling, never-before-seen photos from recent campaign rallies and events featuring President Trump and Vice President Mike Pence; news announcements from Donald J. Trump for President, Inc.; and other materials that you won’t find anywhere else in the media.”

That sound you hear is the heads of those in the mainstream media exploding at the thought of their propaganda machine becoming irrelevant.

I think I hear Chuck Schumer whimpering in the background somewhere. 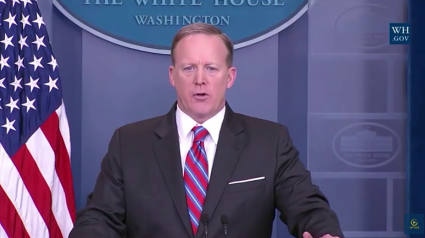 My only complaint with Sean Spicer is that he has always given the White House press corps more credit than they deserve. Like uncivil students who take advantage of a class lecturer who gives the class some leeway for give-and-take, they take advantage of his good nature by trying to argue and filibuster.

We know this because these gives-and-takes make for popular television on Spicer’s popular daytime television show, The Daily White House Briefing. So the outtakes from these shows provide the fodder for the next day’s internet news universe, almost always mocking Spicer.

My constant reminder to Mr Spicer (I’m older than his boss) is that this news universe, their universe, is now much smaller than perhaps even the White House knows. This is largely because of their own profligacy with the facts, and “criminally” exposed to the public, by Sean’s boss. So, today they are teetering on the precipice of irrelevancy, at least among the people who put Sean Spicer in that job in the first place.

On this account, everything is demographics, or as modern pollsters call them, “unfortunate truths.”

If I want to know what Sean Spicer said on any given day, I just visit any left-leaning news aggregator, Yahoo! News Home Page my choice as the best for trolling anti-Trump, anti-Republican, anti-God, anti-America and pro-Big government, authoritarian and pro-Democrat news analysis. Yahoo was read enough to know exactly when to break from Russia-neutral to Russia-bad in November, 2016.

Sean Spicer needs to know just how small this world really is. They are almost all pro-Left, usually heavier on one cause than others, but generally aligned[…]

Let’s see.  Who has more credibility, Judge Andrew Napolitano, or the deep state?

Does Fox News realize that the decision to suspend Napolitano raise a red flag against those forces colluding against a sitting president?

On March 14th, Judge Napolitano made a startling accusation on Fox & Friends, accusing President Obama of using the UK to spy on Donald Trump. For those comments, he has been suspended indefinitely though he is sticking by his story.

”Three intelligence sources have informed Fox News that President Obama went outside the chain of command” to conduct the surveillance on Trump, he said.

The judge didn’t explain if these are retired or currently employed sources or if they have any direct knowledge.

The GCHQ shares much of the NSA’s vast electronic database of signals intercepts and they would be able to gain access to records of Trump’s phone calls the judge said. It would also mean there are no fingerprints left behind, he explained.

.@Judgenap: Three intel sources have disclosed that Pres. Obama turned to British spies to get surveillance on Trump pic.twitter.com/IghCFm7qhO