UPDATE 2: Police One reported about 30 minutes ago on their website and Facebook page that a suspect was in custody but that report has since been rescinded.  Officer Gliniewicz is the fourth officer shot and killed in the past nine days

UPDATE 1: Charles Joseph Gliniewicz, Lieutenant is the name of the police officer killed this morning in Lake County, Illinois. Gliniewicz was married and the father of four sons. The 32-year veteran of the force went by the nickname, “G.I. Joe.” Source: Chicago Tribune. 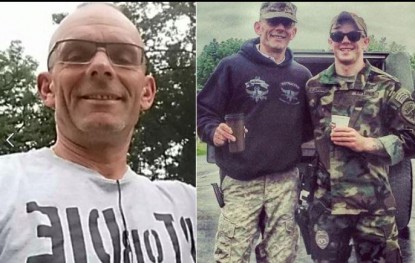 It happened again. Another police officer killed this morning, this time in Lake County, Illinois and as expected, law enforcement is out en masse, in camouflage carrying high-powered firearms, helicopters flying overhead in search of three male suspects, one Black, two Caucasian. In addition, several canine units have also been dispatched.

As reported by the Chicago Tribune, the name of the deceased officer has not yet been released to the public.

Shortly before the officer was killed, he radioed in that he was checking out suspicious activity. A moment later (around 8 a.m.), the officer radioed in once more, stating that he was in pursuit. It was at this point that contact was lost.

… The officer was discovered in a marshy area, stripped of his gun and other gear, according to Lake County Undersheriff Raymond Rose. He died at the scene, the undersheriff said…. With the help of U.S. marshals, teams of police from throughout the county were searching woods and businesses throughout the area….

The areas of the manhunt including schools are on lockdown.

What we do know about the officer is that he has children.

Officer Down #Foxlake Police Department. Rest Easy Brother! We have the watch from here! #nleomf pic.twitter.com/fc5AfYY93y