Sorry to disappoint the Muslim witch-hunt, but it wasn’t Muslims who rioted the day after Christmas, it was Obama’s rotten sons: Thousands of them terrorizing malls and US Citizens in the name of America’s false prophet, Obama.

Click Here To Read The Rest of: .#Muslims Riot At Mall Day After Christmas, Media Blackout

TMJ is right. Have a good look at WHAT THE MEDIA is not reporting:

Follow dear progressive IF YOU CAN: Were you to acknowledge the truth about black mob violence, THEN we could confront/help solve it.

The Federalist by Jane Robbins and Emmett McGroarty

It’s been obvious from the beginning of the Common Core scheme that one of many weak links in the enterprise was college professors. What would happen when their classes were flooded with increasingly ill-prepared Common Core-“educated” students? That problem is now becoming apparent, and a professors’ revolt has now begun in Kentucky—the first state to adopt and implement the national curriculum mandates. Coupled with newly elected governor Matt Bevin’s desire to see Common Core removed from Kentucky, a state that Bill and Melinda Gates have touted as being a Common Core leader may soon join the others dropping Common Core like a hot potato…. 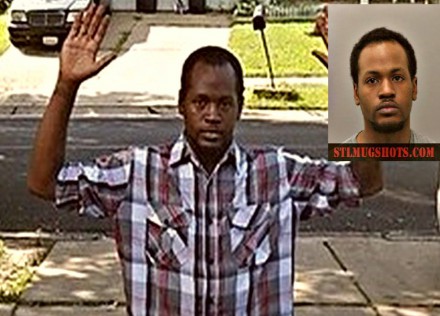 Johnson-Shanks, age 25, it turns out was a supporter of Black Lives Matter who went by the pseudonym “Jay MileHigh” on Facebook.

Pursuant to his now removed Facebook page, Johnson-Shanks was quite active on the ground in Ferguson, Missouri after the shooting of Michael Brown in August 2014 going so far as to attend Brown’s funeral and burial.

UPDATE – It’s Confirmed – it’s the same guy, he was deeply involved in the Michael Brown shooting and subsequent protests, riots, looting, arson, etc. and even attended the funeral and graveside services for Michael Brown. 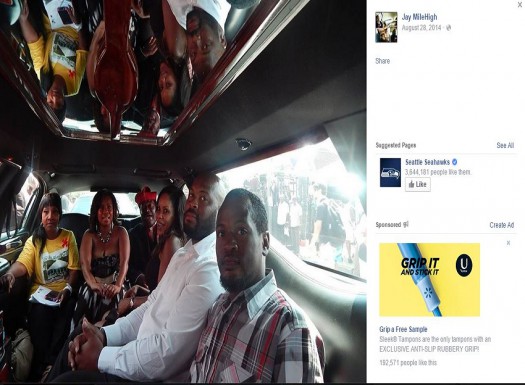 How peculiar is it that the task of scrubbing social media and the internet of all things Joseph Thomas Johnson-Shanks aka Jay MileHigh was imperative and such a priority. 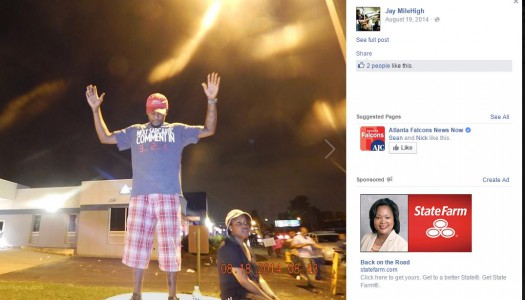 CHAIN OF EVENTS:
On Sunday night shortly after 10 p.m., Kentucky Trooper Joseph Cameron Ponder, age 31, stopped a vehicle on Interstate 24 and upon the findings that Johnson-Shanks had a suspended driver’s license offered to arrange motel accommodations for the occupants of the vehicle for the night including Johnson-Shanks.

Johnson-Shanks’ response was to gun the accelerator initiating a high-speed chase that ended after Johnson-Shanks brought the vehicle to a sudden stop causing Trooper Ponder to crash into the rear of Johnson-Shanks’ vehicle.

According to reports, it was at this point that Johnson-Shanks leaned out of his vehicle and began firing multiple shots into the trooper’s vehicle killing Trooper Ponder. Johnson-Shanks next move was to flee on foot into the woods nearby leaving his occupants, two women and two children behind.

Kentucky State Police issued the following alert on their website and across social media.

.@tedcruz posed with #KimDavis & her husband to show his support after her release from jail http://t.co/yqBHcrnL3Q pic.twitter.com/1IO6IbkOTe

.@GovMikeHuckabee: “If somebody needs to go to jail, I’m willing to go in [Kim Davis’] place and I mean that.” pic.twitter.com/6y2Z0MUBPx

.@GovMikeHuckabee: [Kim Davis] has shown more courage than any politician and pastor. pic.twitter.com/zOfvJawNG9

“We stand with Kim [Davis] today – with gratitude and appreciation.” – @GovMikeHuckabee

The Kentucky judge who last week ordered the imprisonment of Kentucky County Clerk, Kim Davis, for refusing to issue gay marriage licenses has just ordered that Davis be released.

Pursuant to Kentucky U. S. District Judge David Bunning order, Davis must not interfere in any shape form or fashion, “directly or indirectly” with the issuance by her clerks of marriage licenses for all “legally eligible couples.”

‘Defendent Davis shall be released from the custody of the U.S. Marshal forthwith,’ read an order from U.S. District Judge David Bunning, according to BuzzFeed. ‘Defendant Davis shall not interfere in any way, directly or indirectly, with the efforts of her deputy clerks to issue marriage licenses to all legally eligible couples….’

Bunning has also banned Davis from doing television interviews. (What is this with the left and banning interviews with the media?)

As for the marriage licenses, as noted in Bunning’s order, they have been altered “so that ‘Rowan County’ rather than ‘Kim Davis; appears on the line reserved for the name of the county clerk, Plaintiffs have not alleged that the alterations affect the validity of the licenses. Nor do the alterations impact the Court’s finding that the deputy clerks have complied with the Court’s Order.”

BREAKING: Kim Davis to be released, per order from Judge Bunning: pic.twitter.com/eBbzCTwE6k 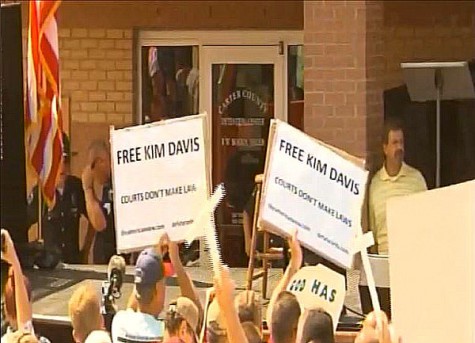 Attendees of this afternoon’s #ImWithKim rally are patiently awaiting Davis’ release outside the courthouse.  (You can view the judge’s order at the bottom of this post and the rally it live stream here).

Progressives, especially the LGBT Gestapo is livid. Claiming that Davis escaped her punishment and accusing Bunning of folding, they are about to blow a gasket on Twitter.

The Camp of the Saints by bobbelvedere

A Federal Judge has arrested Rowan County Clerk Kim Davis and put her in jail for refusing to issue ‘same-sex marriage’ licenses.

The Left, as is to be expected, is praising the Judge’s move.

We have a typical example of this, as reported by Bridget Johnson:

“And every public official in our democracy is subject to the rule of law. No one is above the law. That applies to the president of the United States and that applies to the County Clerk and Rowan County, Kentucky, as well,” [Josh] Earnest said. “And that’s a fundamental principal of our democracy. In terms of how that applies to this particular case? That’s obviously something that a judge will have to decide. And I would not second guess it from here.”

Earnest said he hadn’t spoken with Obama about “this particular matter,” and was “obviously limited in what I can say, given the ongoing court activity.”

“I will just say on principle that the success of the democracy depends on the rule of law, and there is no public official that is above the rule of law,” he continued. “Certainly not the president of the United States, but neither is the Rowan County clerk. That’s a principle that is enshrined in our Constitution and in our democracy, and it’s one that, obviously, the courts are seeking to uphold.”

Some on the Right are saying she deserves this punishment because she has ‘defied the law’.

In two segments of his radio show tonight, Mark Levin demolishes this argument….

“Today, judicial lawlessness crossed into judicial tyranny. Today, for the first time ever, the government arrested a Christian woman for living according to her faith. This is wrong. This is not America.

“I stand with Kim Davis. Unequivocally. I stand with every American that the Obama Administration is trying to force to choose between honoring his or her faith or complying with a lawless court opinion.

“For every politician — Democrat and Republican — who is tut-tutting that Davis must resign, they are defending a hypocritical standard. Where is the call for the mayor of San Francisco to resign for creating a sanctuary city — resulting in the murder of American citizens by criminal illegal aliens welcomed by his lawlessness?

“Where is the call for President Obama to resign for ignoring and defying our immigration laws, our welfare reform laws, and even his own Obamacare?

“When the mayor of San Francisco and President Obama resign, then we can talk about Kim Davis.

“Kim Davis should not be in jail. We are a country founded on Judeo-Christian values, founded by those fleeing religious oppression and seeking a land where we could worship God and live according to our faith, without being imprisoned for doing so.

“I call upon every Believer, every Constitutionalist, every lover of liberty to stand with Kim Davis. Stop the persecution now.”

I STAND WITH KIM DAVIS.

Religious persecution in the United States has just escalated to a whole new level as a U. S. District Judge David Bunning issued an order to incarcerate Kentucky County Clerk, Kim Davis Rowan, until Rowan agrees to comply with his order to issue marriage licenses to for all couples.

During her 20-minute testimony, Davis informed the court that “You can’t be separated from something that’s in your heart and in your soul…My conscience will not allow it. God’s moral law convicts me and conflicts with my duties.”

The ACLU wanted the judge to fine Davis but since various organizations are fundraising on Davis’ behalf and Davis “made it clear the fine wouldn’t change anything,” Bunning decided that fines were not enough to force Davis into compliance.

“Her good-faith belief is simply not a viable defense,” he said. “Oaths mean things.”

Bunning said society relies virtually every day on people complying with court orders and that to allow otherwise would create a slippery slope.

The court “cannot condone willful disobedience,” he said. “If you give people opportunity to choose what orders they follow, that is what potentially causes problems.”

Davis, who was tearful at times, testified that she could not obey the order, and that God’s law trumps the court….

Davis’ attorney, Mac Staver’s response to his client’s incarceration is shock, “This wasn’t even what was part of the original request from the plaintiffs in this case…The judge went way beyond…. Kim Davis might be jailed for her conscience, but her conscience is free.”

Bunning has ordered the Deputy Clerk to court this afternoon where they will have to inform the court of their intent to comply or not with his earlier ruling to issue marriage licenses to gay couples.

The gay mafia with the mainstream media in tow ambushed Davis at her workplace the other day. You can see the video here.

Bunning’s order has escalated religious persecution in the United States, which has been steady rising the past several years to a completely new level.

Lastly, how would the federal government handle a Muslim refusing to issue marriage licenses for gay couples?

Would that individual be persecuted and incarcerated by the federal government? I doubt it very much.