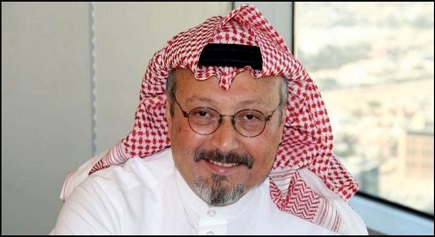 The way the disappearance of Jamal Khashoggi has been covered by the American media (for whom Khashoggi worked–WAPO) should tell you all you need to know about the players. The Saudi Royal family has been split down the middle by a Reform wing and a conservative Wahabbi-Islamist wing since at least the Gulf War, the Saudi king since the Gulf War always having been of the reformist wing, including King Salmaan and his 38-year old son and named successor, Mohammed bin Salman, who many say is going too far with his reforms, especially about liberating women rights.

He is not a friend of the American press for the simple reason that Donald Trump seems to like him, and is the champion of many what once were lsacred iberal position of women’s rights

Jamal Khashoggi is/was on the other side of this equation, though not necessarily of the Wahabbi Islamic-tradition which co-founded Saudi Arabia in the 19th Century, and full-tithe recipient of Saudi oil revenue since oil was first pumped there in the 1930s. They are probably the richest church in the world, and been spending that money by sowing sharia law in the West for at least 30 years.

Khashoggi leaned more toward the Muslim Brotherhood, who had its origins in World War II as “Hitler’s Arabs” with a different view of absolute rule than the Wahhabbi’s. The Brotherhood had a lot of sway in Obama’s White House, and were central to his and Mrs Clinton’s catastrophic Arab Spring, which had caused a military junta to end up in charge in Egypt after an aborted attempt by the Brotherhood to turn that nation into a fascist theocracy, and turn Syria into a bloodbath. Remember when the late-John McCain called the Muslim Brotherhood there “moderate rebels”?  The MB even had a role in the Benghazi murders of September, 2012, due in part to the Obama team’s action to protect the MB’s interests there[…]