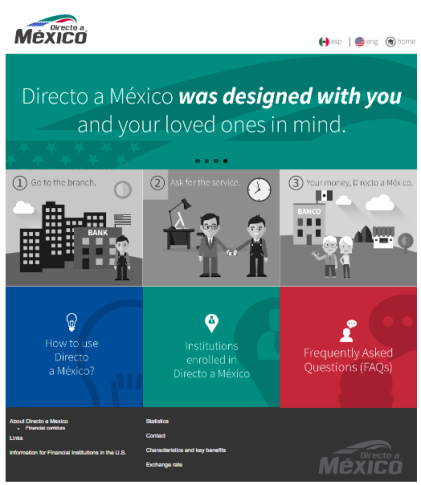 Last year, a shocking record of $33.48 billion in remittances went to Mexico last year through a government program operated by the Federal Reserve, Judicial Watch reported.

The money goes through a taxpayer-subsidized program sending money earned by mostly illegal aliens to the countries south of the border.

In other words, the U.S. government is mostly responsible for the billions in remittances to foreign countries that are sent by people breaking our laws.

Figures released by Mexico’s central bank show that 104 million transactions were executed in 2018, nearly six million more than the previous year. That is just stunning and must stop.

Uncle Sam facilitates the process with a program called “Directo a Mexico” (Direct to Mexico), launched by the Federal Reserve, the government agency that serves as the nation’s central bank, more than a decade ago.

GEORGE CAME UP WITH THE IDEA

President George W. Bush conceived of the program to provide low-cost banking services to [illegal] aliens to help them get the money home.

I would like to believe that these left-leaning rabbis, ministers, and imams had good intentions, joining together to meet the caravan of migrants and provide them with food, clothing and solace, but their logic is deeply flawed.  Whatever their intent, it is unconscionable and immoral for them to presume that they have the authority to offer the United States of America, home to more than 325.7 million American citizens, to any foreign hordes.  In breaking the law, they are setting themselves above the law, which is something expressly forbidden in Judaism and Christianity.

Some of the rabbis used the Holocaust as false justification for the men’s trek to the north (95% of the lot are men), but theirs is a misplaced spirit of humanitarianism.  They have drawn an unsuitable equivalence between the European Jews who were forced to flee their homes in fear for their lives with the Central Americans who were lured by the promise of welfare.   This sense of social justice is peculiarly selective, inasmuch as the rabbis were silent when “Palestinian” youths were propelling incendiary kites and balloons over Israel for more than a half year, burning thousands of acres of precious land and life; silent during these years of firing rockets and mortars into Israel, killing, crippling, and destroying; silent when Jews are attacked on the streets of Israel, France, Sweden, and Brooklyn; and silent when jihada and anti-Semite, Linda Sarsour, rants her hatred against Jews and President Trump[…]

Published once, in September, this is just a reminder. Tell your well-meaning Democrats, just in case they haven’t been paying attention.

Why would the Left be puffing up numbers of a Blue Wave when the numbers don’t justify that…unless they have an alternate plan as to how to make those numbers seem real?

The numbers don’t add up.

It makes no sense for anyone with a family, unless wealthy, or works for Google or Facebook, or has a position anywhere other than a university, or a 6 x 6 cubicle inside a governmeny office building, to go out and vote for a Party that has thrown in 100% with full-fledged enemies of freedom.

Except for their Few, that is.

There are a lot of them; 1) the Democrat Party all the way down to grass roots operatives, 2) as well as some portion of the deep state, (the entrenched federal bureaucracy) 3) as well as the most prominent members of the national media, such as network news organizations (ABC, CBS, NBC), cable news (CNN and MSNBC), national print media (New York Times, LA Times, Washington Post). and virtually every big city print daily in America, none of whom are owned by residents of their cities anymore.

But they have their client base, a group that follows national and world events, at least rhetorically, for it is through a prism provided by the groups named above, and who have an unnatural love of themselves alongside a down-the-nose antipathy for all others. I call these the “In-Group”.  They amount to little more than 15 million adults, and maybe another 10 million if you throw in wannabe one-issue college students (pro-abortion, anti-freedom of speech, global warning, gay-transgender rights) who will actually bother to vote.

Then add another 20 million from the “Client Group”, people who live off the fat of the land, who do no work today, and who are content to stay that way. (This group is diminishing almost daily, for every new job costs Democrats 1 -2 voters).

Fact: Today, the working people in America who work outside the government sector, once the backbone of the Democrat Party, can find no virtue in voting for a Democrat anymore[…]

It is hard to believe that a state government could be so incompetent or should I say intentionally incompetent?

Last month, news broke that California registered “tens of thousands,” correction 23,000 voters to vote “incorrectly.” I know what the heck does that mean?

California’s DMV describes the screw up as “an administrative processing error.”

“An administrative processing error” or a bunch of bureaucrats too lazy to do their jobs.  Technology has wreaked havoc on elections and California’s system is no different.

See screenshot below of California’s DMV site where you can “register to vote when applying for a driver license (DL) or identification (ID) card, or change of changing an address.”

In 2017, the state of California placed DMV self-service kiosks in Safeway Stores.

Approximately 18 kiosks (as of last year dubbed DMV NOW were placed in the Bay Area of San Francisco.

…”The 14 Bay Area locations are the only stores that will receive a DMV Now Self-Service Terminals,” Jessica Gonzalez, the DMV’s assistant deputy director of public affairs, told us via email. “It was challenging to get more SF locations because of ADA requirements.”

The DMV Now Potrero Center kiosk can help drivers renew their registrations and dispenses license plate tags on the spot. Previously, these documents took days to receive in the mail even if users completed the transaction online[…]

Technology makes it so easy to cheat and commit fraud.

Enter October and the DMV is reporting that at least 1,000 people who are not American citizens have been registered to vote.  Another error.   Not buying it.  Four weeks to go and the whole thing stinks beginning with the true amount of voters “incorrectly” registered to vote including illegal aliens.

The Daily Signal by Will Racke

An error at California’s Department of Motor Vehicles caused more than a thousand people, including some who were not U.S. citizens, to be incorrectly registered to vote, state officials said Monday.

The DMV admitted that a “processing error” at agency field offices resulted in as many as 1,500 people being added to voter rolls between April 23 and Sept. 25.

The widespread glitch was discovered after Randall Marquis, a Canadian citizen and legal U.S. resident living in California, notified the DMV he had received a piece of mail from the agency saying he was registered to vote. In response to Marquis’ alert, the agency ordered an internal audit and discovered hundreds of similar cases.

“This error occurred when DMV technicians processed customer requests at field offices to change voter eligibility responses on driver license applications,” the DMV wrote in a letter to California Secretary of State Alex Padilla, according to the San Francisco Chronicle. “Due to the order in which the change was processed, the customer’s initial responses were retained instead of the correct and revised responses.”

The DMV said the improper registrations were made “through no fault of the customer.” None of the people who were registered to vote due to the error were illegal immigrants, the agency added.

“We have worked quickly with the Department of Technology to correct these errors and have also updated the programming and added additional safeguards to improve this process,” DMV Director Jean Shiomoto said in a statement Monday, according to ABC News.

The spate of improper registrations was the second major statewide error at the California DMV in the last two months. The agency admitted in early September that it had mishandled about 23,000 voter registrations by assigning them to the wrong political party or mislabeling vote-by-mail preferences.

Padilla said Monday he was “deeply frustrated and disappointed” by the errors at the DMV. He called on the agency to hire an outside consultant to help shore up its voter registration process.

An audit of California’s DMV voter registration program—commonly known as “motor voter”—is likely to turn up more instances of mistaken registration, according to the Public Interest Legal Foundation, a nonprofit that investigates election integrity issues. A Public Interest Legal Foundation report released in August found that hundreds of noncitizens were recently purged from voter rolls in three major California counties, most of them after having registered through the motor voter program.

“There can be much more to come on this front, given Secretary Padilla’s quick call for an audit and quoted claims from noncitizens caught in the system,” Public Interest Legal Foundation spokesman Logan Churchwell told The Daily Caller News Foundation. “Too many noncitizens learn of … their unlawful registrations from federal authorities during immigration procedures thanks to sloppy motor voter enforcement like seen here. We’ve seen thousands document those rude awakenings across the country.”

Permission to republish granted by The Daily Signal.