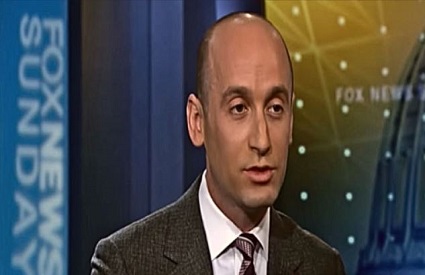 I like Stephen Miller and how he delivers President Donald J. Trump’s message.  I think that the President should send Miller out to the Sunday morning talk shows more often.

Trump’s critics announce plans to challenge the president’s bid to secure funds for his border wall.

While never underestimating this businessman’s many abilities, it is not so much that President Donald J. Trump is able to walk and chew gum at the same time, it’s that we finally have a President who insists upon doing so concurrently (times ten) while keeping AND fighting to keep promises made to Americans.

Imagine that a whole generation(s) exists that has never witnessed such occurrences.  The deep state, the Progressive leadership of both parties, the global establishment order and their media collaborators have brainwashed tthese useful idiots to believe that Trump’s actions are an anomaly.

What a wonderful past week we’ve been lucky to have. President Trump gave us three gifts this week.

1) Leaving Syria and drawing down in Afghanistan – we won the war, but we’ve had a stalemate in the nation rebuilding. I love General Mattis, however, he is a war machine guy, and why shouldn’t he be, he is very good at it. For as long as anyone can remember, we’ve known Trump to be a non-interventionalist. As president, he gave General Mattis time to do what he felt he needed to be done, and then it was time to move on. I thank General Mattis for his service to this great nation.

President Trump wants U.S. troops brought home from all the “stupid wars”; and as a consequence the time for Defense Secretary Mattis was sure to come to an end.

The Trump Doctrine of using economics to achieve national security objectives is a fundamental paradigm shift, history provides no reference.

Just like the demanded restructuring of NATO, removing troops from Syria and likely Afghanistan will run counter to the interventionist policies of those who advocate for military deployments; and also the benefactors on the business end of the military industrial complex.

Yes, it’s time for a shift.

2) The President was able to get the House to vote for wall funding, and had no problem shutting down the gluttonous government when the Senate refused to vote for its passage. Trump doesn’t play chicken, he makes deals and this shutdown will be long for the Democrats, GOP Inc and federal employees[…]

I would like to believe that these left-leaning rabbis, ministers, and imams had good intentions, joining together to meet the caravan of migrants and provide them with food, clothing and solace, but their logic is deeply flawed.  Whatever their intent, it is unconscionable and immoral for them to presume that they have the authority to offer the United States of America, home to more than 325.7 million American citizens, to any foreign hordes.  In breaking the law, they are setting themselves above the law, which is something expressly forbidden in Judaism and Christianity.

Some of the rabbis used the Holocaust as false justification for the men’s trek to the north (95% of the lot are men), but theirs is a misplaced spirit of humanitarianism.  They have drawn an unsuitable equivalence between the European Jews who were forced to flee their homes in fear for their lives with the Central Americans who were lured by the promise of welfare.   This sense of social justice is peculiarly selective, inasmuch as the rabbis were silent when “Palestinian” youths were propelling incendiary kites and balloons over Israel for more than a half year, burning thousands of acres of precious land and life; silent during these years of firing rockets and mortars into Israel, killing, crippling, and destroying; silent when Jews are attacked on the streets of Israel, France, Sweden, and Brooklyn; and silent when jihada and anti-Semite, Linda Sarsour, rants her hatred against Jews and President Trump[…]

“Pastor Coffin even asked if they could provide the children with toys, blankets and food. But the federal government’s response was the same – no donations allowed.”

So what the heck is Glenn Beck talking about but that’s another post. Moving on…

Illegal aliens experiencing Obama’s disdain for the church and charities first hand but they are so immersed in their own miserable world that they will fail to pick it up.  Again, moving on….

Why would Barack Obama deny illegal aliens, whom are Latino and Christian by nature spiritual enlightenment and much needed donations?

Answer: This is a manufactured crisis. In order for such a nefarious scheme to be successful, the pawns in this nightmare and the misery indexing of their pain and suffering discernible.

Evil yes, but not unlike other nefarious deeds conjured up by the Obama administration as witnessed by Americans the past six years.

While we are on the subject, let us not call them detention or processing centers, call them by their names, “prisons” or “internment camps” and WHAT ARE THEY HIDING?

Pastors and churches have been banned from helping the thousands of illegal immigrant children housed in border detention facilities run by U.S. Customs and Border Protection, clergy in Texas and Arizona tell me.

‘Border Patrol told us pastors and churches are not allowed to visit,’ said Kyle Coffin, the pastor of CrossRoads Church in Tucson, Arizona. ‘It’s pretty heartbreaking that they don’t let anybody in there — even credentialed pastors.’

A public affairs officer for the Border Patrol confirmed that ministers and church groups have been banned from the Nogales Placement Center.

‘Due to the unique operational and security challenges of the Nogales Placement Center, religious services provided by outside faith leaders are not possible at this time,’ the Border Patrol told me in a statement…. One of the other ministers placed a telephone call to Border Patrol and was turned away. So Coffin decided to make a telephone call, too – and what he was told was startling.

What about just a pastoral visit to encourage the children?

What about allowing pastors to pray with the children?

“There was an immediate no,” he replied….

Illegal aliens, young and old are pawns in Barack Obama’s tool chest. They and their families must be broken so that Progressives can march them out giving the impression that these people arrived here in the USA lost (we’re hearing that spin now) and that only the American government can save them.

After their spirits are truly broken, Barack Obama and fellow Communists will step up the spin in their televised propaganda campaigns accusing Americans opposing this manufactured crisis of being heartless.

We are not heartless; we are just no longer easily bamboozled by this administration.

The talking points will be, ‘we’re trying to do this for the children and they won’t let us,’ ‘they’re trying to stop us’ and ‘what kind of people are they?’

All of the above explains why Obama is having such a good time doing photo ops, bowling, playing pool, bar hopping, campaigning and fundraising.

Obama could care less about the suffering of his pawns whose bamboozled parents never imagined their children ending up in federal prison detention center disease ridden internment camps indefinitely after crossing the U.S.-Mexico border.

This is not a refugee problem but unintended consequences (maybe not) of those who believed that Obama loves children and would not be so cruel. SIKE!

This will backfire on the Obama administration and their Commie clan of self-serving elitists, all of whom are in over their heads.

Talking points to give them cover will be as follows: