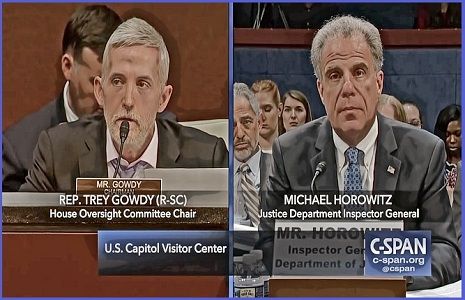 Below is Tuesday’s testimony of Department of Justice Inspector General, Michael Horowitz before the Full House Committee on Oversight and Government Reform.

The subject of the hearing was “Oversight of the FBI and DOJ Actions in Advance of the 2016 Election” and boy was it lively and long.

Despite a lunch break, five hours into the hearing, I imagined the Inspector General upon conclusion of the hearing making a “B” line to the nearest bar for a double shot of anything that is 80 proof.

To examine the findings and recommendations contained in the DOJ OIG’s report on the events leading up to the 2016 election.

ICE Special Agent Jaime Zapata, shot and killed in the line of duty February 15, 2011 after being forced off the road by 10 members of a Mexican drug cartel. (Credit: U.S. Immigration and Customs Enforcement)

On Thursday, March 9th, the Full House Committee on Oversight and Government Reform held a hearing: Reviewing ATF’s Failures in the Death of ICE Agent Jaime Zapata. See footage and information below.

Suggested reading on the death of Agent Zapata and what is alleged to have unfolded: Agent Zapata by Mary Cuddehe, Atavist Magazine