A combined force of 15,000 troops led by US Marines launched a pre-dawn assault on Marjah. (AFP: Patrick Baz)

Ronald Reagan once quipped that nine of the most terrifying words in the English language are “I’m from the government, and I’m here to help.” Yet if The Great Communicator were alive today he very well may tack on four more words to his anxiety inducing salutation, “… and I’m heavily armed.” As reported by the Washington Free Beacon, there are actually more armed federal bureaucrats than US Marines. Citing a report issued by a taxpayer watchdog group, of the nation’s 182,100 Teufelshunde, they are actually outnumbered by 200,000 paper-pushers with guns.

According to a report entitled the Militarization of America commissioned by the citizens advocacy group “Open the Books,” just one of the few but disconcerting totals coming to light are raising eyebrows. Federal agencies have, for example, spent $8.2 million on buckshot; $1.6 million on unmanned aircraft; and a curious $4 million on grenades and grenade launchers[…]

Permission to republish with attribution granted by OpenTheBooks.com, a project of American Transparency. 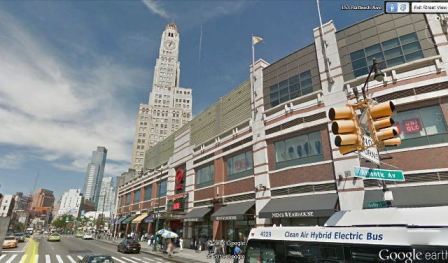 New York City mayor, Bill de Blasio gets no credit for downtown Brooklyn, New York as it is today.  What you see in the above photograph came about because of Michael Bloomberg, building fever throughout the City.

What Commie de Blasio can take credit for is the transportation mess he has created downtown Brooklyn and throughout the City of New York with his over-regulated Vision Zero agenda.

Downtown Brooklyn has always experienced traffic jams 24/7 but that last thing any New Yorker would have imagined is that the congestion could get worse.

Enter de Blasio and Progressive bike lanes where they need not be and the over-regulation of everything that breathes or moves in the City.

Unable to spend their way into a progressive future, Democratic mayors have turned to regulation as a panacea.

Democrats currently govern most major American cities and face no serious Republican challenges in any of them. Of the 50 largest cities in the United States, only 13 have Republican mayors. Surprisingly, while urban areas have been turning deep blue, Democratic city governments have not been increasing their spending as much as most people think. Massive debt and poor revenue growth have forced urban Democrats to find a more austere pathway to satisfying their progressive ambitions. They have found it in regulation. By legislating how businesses can conduct themselves, whom they can hire, what they must provide, and much else, Democrats in local governments are transforming the new urban progressive agenda into a regulatory agenda.

Because of this, even as these politicians tout their imposed correctives for sluggish growth and inequality, we should expect increased stagnation and growing inequality in the coming years. If Democrats continue to expand regulations, the urban economy will be even less accommodating to small businesses and entrepreneurs than it is alread. And as these economic engines stall, opportunities for the poor and immigrant classes will dry up. The liberal appetite for the imposition of local regulation, like the appetite for spending it has supplanted, will usher in a new chapter in the history of unintended policy consequences. And, once again, the worst-off among us will pay the highest price.[…]

A plan to house hundreds of illegal immigrant children at a multimillion-dollar hotel complex in Texas was scuttled after the prospect of taxpayers footing the bill for luxury lodging proved too much of a public relations obstacle.

BCFS, previously known as Baptist Child and Family Services, which has a contract with the Department of Health and Human Services to run camps at Lackland Air Force Base in San Antonio and Fort Sill in Oklahoma, had a deal to buy the Palm Aire Hotel in Weslaco, Texas, for $3.8 million….

I am certain that their buddies in the Congressional Hispanic American Caucus, White House and HHS will do something on the down low to make up for this setback.

The charity only backed out after word got out and the outrage that followed.

H/t to Now the End Begins for its report that the Obama administration will spend millions of taxpayer dollars to transform the Palm Aire Hotel and Spa Suites into housing for illegal alien children.

BCFS Health and Human Services secured a multi-million federal contract to house young illegal immigrants at the site of the current Palm Aire Hotel and Suites on FM 1015.

Representatives with BCFS said the Palm Aire will undergo a multi-million dollar transformation.

Facilities at the Palm Aire, a three-star hotel and resort include indoor and outdoor pools, Jacuzzi, tennis court and health club facilities.

So Obama is going to fork up $50 million (at least) to transform this resort into a housing center for illegal alien children while poor American children who are homeless and/or hungry remain so.

Searching for places to house the “overwhelm[ing]” influx of Mexican and Central American children crossing the U.S. southern border without parents or guardians, government officials scouted out an abandoned hotel in Grand Island, New York on Friday.

Or at least the government thought the hotel was abandoned.

As it turned out, the 263-room Byblos Niagara Resort and Spa was fully booked.

“It looks like there’s been a mistake,” federal agents with the Homeland Security Department and the Border Patrol told the hotel manager, according to the Buffalo News.

“They were thinking the hotel was abandoned and closed,” the manager said….

A simple Google search could have saved the agents the trip the the hotel.

What is clear is that the feds were moving quickly, without giving local authorities much notice…..

Cannot help but wonder if the feds even gave a damn as to whether the hotel was abandoned or not.  Since they failed to give local authorities notice, they might have intended to bully the hotel owner out of his property.  Property grab anyone?  Even worse, Obama administration funding a summer camp for illegal alien kids because oh, they’ve gone through so much? On my tax dollar? Really?

If the federal government wants to fly illegals somewhere, fly them to the other side of the Mexican border.

HARTFORD (CBS Connecticut) – Connecticut-based Sikorsky Aircraft, which has built the Presidential “Marine One” for the U.S. Navy since the 1950s has been chosen to build the next fleet of presidential helicopters. The company today announced a nearly one-and-a-quarter billion dollar contract to modify, test and deliver six dual-engine, medium-lift S-92 test aircraft helicopters and two simulators to the Marine Corps, the initial step toward a total of 21 operational aircraft. The aircraft will be assembled at Sikorsky’s Coatesville, Pennsylvania plant, and some specialized communications systems will be installed by Lockheed Martin in Oswego, New York, but the helicopters […]