A word of advice and plenty of good information below on how to choose your candidates in this year’s mid-term elections. Do not focus on distractions or whom suggests what. Do your homework, America. Make an educated vote and make your vote count. There is much at stake.

To the disgust of Republican Party elitists and as ignored by the Washington Post, veterans and Republican supporters of the candidate toward the end of the candidate’s speech gave Moore a standing ovation (OMG, how could they? Who are these people? sarcasm). 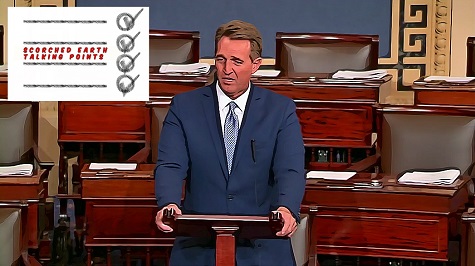 Senator Jeff Flake of Arizona during his announcement Tuesday on the Senate floor that he would not seek re-election next year used every talking point espoused by the Communist media complex, swamp critters on the left, snowflakes, domestic terrorists and NeverTrumpers.

Flake rambled through his 17-minute speech in which he castigated President Donald J. Trump, leader of the Republican Party and while the D.C. swamp heralds Senator Jeff Flake’s speech as one for the books, it was not.

The speech lacked originality of thought and opinion. It exposed the GOPe’s disdain for POTUS, Republican voters. Flake’s intent was to do harm and in that, he was successful but not as he hoped.  The senator’s speech was inspiration to Americans, President Trump, Steve Bannon among others now more determined than ever to see that the swamp is drained.

As I listened and observed Flake, I wondered if Media Matters, MSNBC, CNN, George Soros or even failed spoiler/2016 third-party candidate, Evan McMullin faxed the failed Senator from Arizona who never once in eight years took on Barack Obama  a checklist of talking points to sling hash at the President from the Senate floor.  [ICYMI: See video of speech at bottom of post.]

Laura Ingraham said it best, “the speech sounded like one given by a Democratic leader lambasting a Republican president…could’ve been a speech delivered by Nancy Pelosi or Chuck Schumer.”  Ingraham is right.

Flake and Bob Corker are representative of the D. C. establishment still angry and resentful that now President Donald J. Trump wiped the floor with them in the Republican presidential primaries and then nearly one year to date in the 2016 presidential election.

The GOPe simply cannot handle it and like their establishment mates on the left, rather than respect election results and push through the President’s agenda, instead they obstruct and engage in a scorched earth campaign.

Flake who has only to look within to see that It is the GOPe who has proven itself to be “reckless, outrageous and undignified” glossed over the fact that he is out of touch with Arizona Republicans and polling at 18%.   For that, he blames President Trump and although he didn’t say it, wacko birds. (Correction, the term “wacko birds” is so yesterday, “white supremacists” and “nazis” are the labels the swamp is using to attack Trump supporters although “white supremacists” and “nazis” are clearly and historically owned by Democrats.)

Sean Hannity had a few words for the trio of NeverTrumpers last night on his program.

Seventeen minutes of Marxist propaganda.  That is to be Senator Jeff Flake’s legacy.  He should have submitted a resignation letter or instead prepared a two-minute video.  Instead, in a vengeful 17 minutes, Senator Jeff Flake successfully shot his legacy to hell.

It did not take long for the Communist media complex to ask Flake, “well since you hate the President so much, why don’t you help us impeach him?”  Okay, I embellished a little but you know where I’m going here and I have the montage to prove it.

Troubling, very troubling in that the war on the President is a war on the American people.

I lost track of the many Trump supporters, beginning with Ann Coulter, who turned on a dime against the President Wednesday night mode based on  false allegations that the President betrayed his supporters.

Immediately, NeverTrumpers such as Jenny Beth Martin, president of Tea Party Patriots were out in full force, i.e., “take the lies and run with it”mode.  The endgame: drive a wedge that cuts so deep that it would fracture Trump’s base to the point of no return. (See: NeverTrumper, Jenny Beth Martin: Trump Starting to Sound like Hillary on Immigration)

Confusing and conflicting stories have been floated around about the dinner meeting between Chuck Schumer, Nancy Pelosi and Donald Trump last night which allegedly ended in a DACA agreement with no wall.

Nancy Pelosi ran out to the mic last night to say the agreement was reached to “enshrine” DACA into law. She added there would be added border security but there won’t be a wall.

It seemed that Trump was backing away from his pledge about amnesty and the wall. It was met with outrage and disbelief by Trump supporters.

None of it made sense. Trump is intelligent. Why would he turn off all of his supporters as he is about to launch a 14 state tour to sell his tax plan?

Bill O’Reilly said on his podcast this evening that the two Democrat leaders and the media did it deliberately to turn Trump’s followers against him. Both walked back their statements after Trump tweeted that no deal was reached.

Rush Limbaugh said much the same thing on his radio show Thursday — Pelosi possibly rushed out to give a statement to drive a wedge between Trump and his supporters. The media and some Republicans jumped right in to hurt Trump. Rush said:

After months of Progressives, NeverTrumpers, the Republican Party establishment and the Communist media complex levying outrageous allegations against the President only to walk it back days, in this instance hours, later, one would think that voters would learn.

Speaking for myself as a Trump supporter, I have been through more than enough and should know better than to fall for propaganda espouses by Progressives, NeverTrumpers, the Republican Party establishment and the Communist media complex who view the President’s America First agenda as a threat to their dominion over we, the people.

Whenever Progressives, NeverTrumpers, the Republican Party establishment and the Communist media complex are on the attack against POTUS45 and reporting the outrageous, keep in mind that if it walks like a duck, talks like a duck, it is another dog and pony show.

(Out of coffee this morning.) 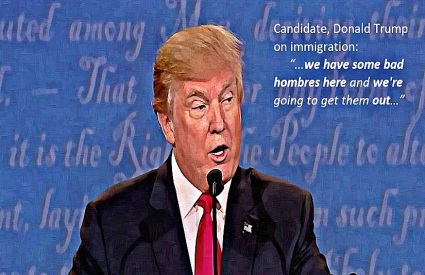 Speaking for myself, I am apoplectic that the Republican Party in the House and the Senate are blocking President Donald Trump’s agenda, an agenda that I voted and continue to support.

Paul Ryan and Mitch McConnell leading the blockade have proven themselves a threat for years and it must end in 2018.

Below is an guidance manual as to how we can resolve this issue.

Please Ask Them The Question, If You Can, On Digital Video, In Front Of Others, And Get The Promise In Writing, Too

A couple of days ago a good friend from Ohio asked me which candidate he should support in the 2018 Republican Party primary election in Arizona, where I live, to take out #NeverTrump incumbent Sen. Jeff Flake. I told him I had not yet made up my mind, as there might be others who will get into the race. Currently, the front-runner is former Arizona state senator Dr. Kelli Ward, who ran against Sen. John McCain in the 2016 primary election.

My friend, Ohio precinct committeeman Rick Herron, who really, really “gets” what matters in political party politics, told me to ask this question of all of the Sen. Flake challengers, including, as set forth below, Dr. Kelli Ward:

The same question needs to be asked of every “conservative” running against an incumbent #CampaignConservative Republican: Will you vote for or against the Freedom Caucus candidate for Speaker of the House?”

And when you do this, make sure you get them on video. Here’s why. (You can scroll to the 3:15 mark of the video.)

And why does Rick advocate this? Because . . . it is fundamental[…] 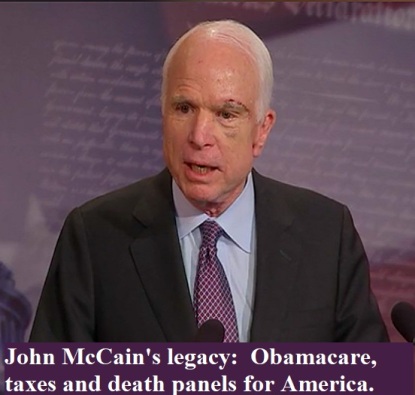 There is simply no excuse other than to say that after seven years of lying to the American people about the repeal and replace of the failed Affordable Care Act, that for a legislative body refused to express and act on the will of the voter, it is business as usual.

Because of their disdain for President Trump which reflects their disdain for we, the People and the fact that their hearts until this day was never into repealing and replacing Obamacare, the so-called Skinny Bill. Republicans and their Marxist counterparts on the left failed the nation AGAIN.

Three Republicans and all 48 Democrats and Independents voted down the stripped-down repeal measure of Obamacare that some Republican senators didn’t even want to become law, but rather wanted to continue the legislative process to improve the bill. The unusual scene played out around 1:30 A.M. on Capitol Hill.

Trump had called via Twitter over recent weeks for Republicans to “step up to the plate” and keep their promise to repeal Obamacare, writing repeatedly that it was up to them to get it done.

After another setback to this agenda Friday, Trump wrote, “3 Republicans and 48 Democrats let the American people down. As I said from the beginning, let ObamaCare implode, then deal. Watch!”

3 Republicans and 48 Democrats let the American people down. As I said from the beginning, let ObamaCare implode, then deal. Watch!

RINO Senators John McCain (R-AZ), Susan Collins (R-Maine) and Lisa Murkowski (R-Alaska) along with the comrades on the left did not disappoint when they voted NO.

Gasps and applause from the Senate floor as McCain votes no on ‘skinny’ Obamacare repeal. https://t.co/c8WxE0BwjS pic.twitter.com/wWPbBQNGiE

Taking into account that Senate Majority Leader, Mitch McConnell never intended to repeal Obamacare from the start, the decision to hold out until the return of McCain makes perfect sense. For the GOPe, last night was mission accomplished so now let’s move on.