Amazing how those pushing for a government surveillance state will lie and twist the truth.

Glen Greenwald was impressive despite attempts by General Hayden and Michael Dershowitz to discredit Edward Snowden and those of us who disapprove of government spying on us. How ignorant and gullible do these Progressives think we are?

It is the debate of the moment. In a risk-filled world, are democracies justified in turning to large-scale state surveillance, at home and abroad, to fight complex and unconventional threats? Or is the emergence of the surveillance state and the awesome powers it derives from information technology a new and pervasive threat to our basic freedoms? For some the answer is obvious: the threats more than justify the current surveillance system, and the laws and institutions of democracies are more than capable of balancing the needs of individual privacy with collective security. For others, we are in peril of sacrificing to state surveillance and exaggerated terrorist threats the civil liberties that guarantee citizens’ basic freedoms. To engage this global debate our spring 2014 contest moves the motion:

Be it resolved state surveillance is a legitimate defence of our freedoms….

So did the audience by what Hayden and Dershowitz was selling?  See the results below: 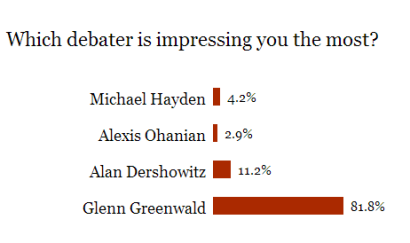