Less than 24 hours ago, i.e., Friday morning (March 2, 2018), the world and foreign dignitaries joined Americans from coast to coast and of every class and ethnicity as we came together, some in person and many others through our tv sets, to pay our final respects to the Reverend Billy Graham.

The service was as spiritual as it was uplifting.  Reverend Billy Graham’s children and friends shared memorable moments giving the world insight into the man, Billy Graham.  The service was not so much a moment to mourn but to celebrate the life of the Son of God’s most famous cheerleader.

Thus, it is only fitting that on Reverend Billy Graham’s grave and marker will be the inscription:

Preacher of the Gospel of the Lord Jesus Christ

John 14:6 reads, “Jesus answered, ‘I am the way, the truth, and the life. No one comes to the Father except through Me.’”  It is only fitting as Reverend Graham has quoted this passage hundreds if not thousands of times over during prayer, at crusades throughout his life.

See video below of Reverend Billy Graham’s sendoff. [Note: I have cued the video to begin at the commencement of the funeral service (01:6:50) of video.] 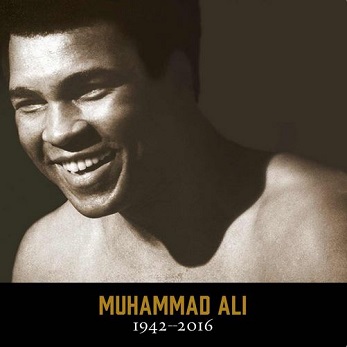 Muhammad Ali died a week ago.

Fair warning:  I suspect that my post will offend those who see no problem with ideologues pushing their agenda at Muhammad Ali’s funeral but who cares.

It’s no secret that regardless of Ali’s stance on anything that as a child, for me he was “the Greatest” and I don’t use that term lightly. (Okay, maybe I did back then.  Joe Louis was the greatest, Jack Johnson was the greatest, etc.)

Most of us in the Black community were not interested in Ali’s politics until it came to past that his belt and title as Heavyweight Champion of the World was taken away after Ali refused to be inducted into the armed forces during the Vietnam war because of his religion. Yada, yada, yada yada (respectfully).

All of that aside, Ali was a heck of a boxer and for us boxing fans that was all that mattered back then.

In spite of the times, respecting the free speech of all, we agreed to disagree.  Not so much four and half decades later.

As soon as news of Ali’s death broke, opportunity presented itself but not to pay final respects to an American icon (love him or hate Ali, American icon).

Progressives with an agenda reveled in the opportunity to publicize and politicize their agenda thus they staged and rehearsed their script for Ali’s final lap around the Progressive plantation.

Although absent, Barack Obama would not be denied.

Ali is to be admired for many things but this funeral today wasn’t solely about admiration for him. For some, it was about all the leftist ideals they could squeeze into the ceremony….Valerie Jarrett played the race card over and over.

“He’d have everything stripped from him, his titles, his standing, his money, his passion. Very nearly his freedom. But Ali still chose America. I imagine he knew that only here in this country could he win it all back. So he chose to help perfect a union where a descendent of slaves could become the king of the world. And in the process, in the process, LEPD some dignity to all of us. Maids, porters, students and elderly bathroom attendant and help inspire a young, mixed kid with a funny name to have the audacity to believe he could be anything, even the president of the United States!”

Then there was the Progressive Rabbi Michael Lerner who attacked Donald Trump while pumping up Hillary Clinton’s policy and presidency?  Really?  His presence must’ve perturbed Muslims who would behead the globalist in a New York minute.

Sportscaster, Bryant Gumbel lambasted evil America, a nation that opened its heart and the gateway to opportunity to Gumbel who obviously forgot that back in the day it was many in the Black community who despised and more often than not referred to Gumbel as an Uncle Tom.

Flying in the face of hypocrisy, Bill Clinton, who passed the Crime Bill which resulted in the mass incarceration of Blacks, many of whom remain incarcerated this day delivered Ali’s eulogy.   He did it for Hillary. 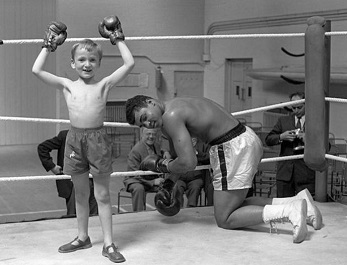 While Ali was as good a showman as he was boxer, his funeral should have remained just that, a funeral, i.e., a tribute to his legacy not an attack on Donald Trump, the wall, an opportunity to push Hillary Clinton into the White House or a platform for Progressives to spoon-feed viewers around the world their America is evil propaganda.

While Ali wore many hats, life was not solely about the race card and if America was so evil, he would never have received his first opportunity to become the Heavyweight Champion of the World, let alone the opportunity to stage his comeback.

Instead ideologues desecrated his legacy (my opinion anyway) with their Marxist circus propaganda and made it about such and little more (again my opinion).

Did I mention that some would find this post offensive?

So, for a moment, let me go there.

While it may escape many, Progressives have turned the sendoff of famous Blacks, celebrities and otherwise into a final lap around the Progressive plantation.

It came as such a relief when after the passing of musical artist, Prince Roger Nelson, several weeks back his family privately laid the artist to rest thereby denying those with an agenda and looking for a show the opportunity to take advantage.

Progressives are allowed to pull these final laps (dog and pony shows) off by labeling it a tribute or sharing.

It is up to Black America to say enough with the circus but while some in the Black community honestly believe that the televised funerals are an opportunity for the world to pay its final respects, for others it’s an opportunity and still others tune in for the show.  The show of which they were denied yesterday.

How did I reach this conclusion? Easy.  The many discussions that I have had through the years from those in my community who tuned in to these sendoffs alleging that it was their way of paying a final tribute to the deceased but walking away remembering only the performances, the jokes, who sang, what they sang, etc.

Who did the eulogy?  Few will recall.

Case in point, a post I intentionally published hours before this post of Billy Crystal’s monologue at Ali’s funeral yesterday.  Note: Crystal blew it when it took an off-handed swipe at Donald Trump by mentioning the wall.  I suspect that political correctness led him to that point.

For any concerns regarding the use of images or footage in this post, I direct you to this blog’s Fair Use Statement.

Supreme Court Associate Justice Antonin Scalia’s Bench Chair and the Bench in front of his seat draped in black following his death on February 13, 2016. Source: SCOTUSBlog.

While the nation mourns the death of Supreme Court Justice, Antonin Scalia, the Muslim in chief, Barack Obama, will not be among the dignitaries attending Scalia’s funeral on Saturday.

Joe Biden and his wife will be among those in attendance at the Basilica of the National Shrine of the Immaculate Conception on Saturday.

Instead the Obamas will pay their respects on Friday when Scalia is lying in repose at the Supreme Court.

Obama and first lady Michelle Obama instead will go to the Supreme Court on Friday “to pay their respects to Justice Scalia” while the justice lies in repose in the Great Hall, press secretary Josh Earnest told reporters Wednesday.

The most recent member of the Supreme Court to die was Chief Justice William Rehnquist in 2005. In that instance, President George W. Bush not only attended the funeral, he also eulogized Rehnquist, who had been nominated to the court by Richard Nixon….

SOB has no class. 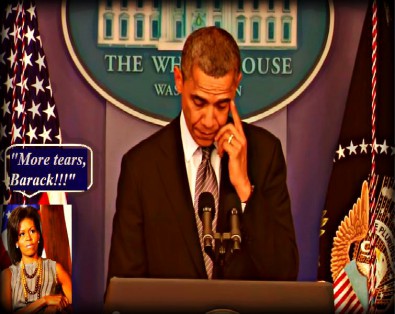 Pinckney is one of nine people shot and killed by an anarchist during bible classes at the church last Thursday.

Progressives never one to let a good crisis go to waste, it will be a family affair with Michelle Obama and Joe Biden in attendance as well.

Expect Obama to go into preacher mode, misquote scripture, tear up, race bait, invoke Sasha, Malia and Michelle while blaming Republicans and the Confederate flag – you know, his usual spiel. (When Newtown fails, park the train, wake for another opportunity then try again. In other words, Friday’s funeral will be fundamentally transformed into another one of Obama’s dog and pony show.)

For those wondering why the riots haven’t started, there you have it. DeRay McKesson and fellow paid agent provocateurs will wait until Obama is on Air Force One before commencing part two of the dog and pony show.

In the meantime, McKesson and comrades are recruiting and gathering their astroturf of thugs.