more about “Former Obama Supporter “Sees the Ligh…“, posted with vodpod
The message is clear.  Take a stand America!  Your rights, your freedom, your country and the future of your children are at stake. We are in this together.
God bless America!!
(P.S.  Music might be a little loud for some, therefore, you may want to re-adjust your volume.)

Is there no low to how far progressives will sink?

I find the mere thought of disclaimer on the U. S. Constitution highly offensive.  To those unfamiliar with my posts, please be advised that I do not support any such disclaimer.  I am merely explaining what I believe to be the agenda of the left.  Consider it a warning.

Ask yourself, why has the publisher placed a disclaimer on the U.S. Constitution?

ANSWER:  I suspect that there is an effort afoot to downplay the importance and validity of the U.S. Constitution and founding documents by progressives. 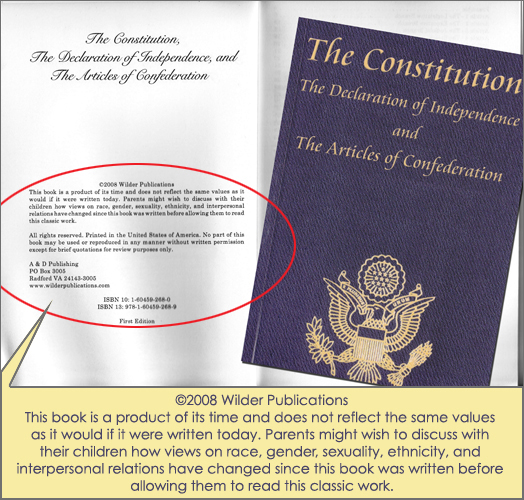 This is about a progressive agenda to dictate to Americans and others that the United States of America no longer recognizes the U.S. Constitution and the founding documents.  Of course, this would also speed the progressive agenda along as progressives would then view the forfeiture of such documents as the equivalent of Americans forfeiting our freedom, our voice and our rights.

In other words, progressives are hoping that if they say it enough and we read it enough that we will start believe the hype. This an attempt at indoctrination.

Clearly, these are the same people re-writing our history books.  INDOCTRINATION!!  This is not acceptable.  In fact, it is downright insulting and disrespectful to our nation, our founders and the American people.

I am appalled that Amazon would embrace A&D Publishing or Wilder Publications.  They need to hear from us.

“If you read yesterday’s thread in George Washington, ‘Oops! My, bad’ you might have seen this mentioned by @racist. He bought a copy of the Constitution from Amazon, and upon reviewing his purchase, read a shocking statement from the publisher inside the book. He was kind enough to scan the page for iOTW and it is for real.

Here is the book’s page on Amazon.com. If you read the reviews-other folks are surprised/shocked/angered too. Why does Amazon still use A&D Publishing/Wilder Publications if their product is defective and biased? You might want to ask them.

Or, maybe you’d like to write a letter directly to:

Contact Amazon and the publishers. Let them know that disclaimers on our Founding documents are unacceptable and must be removed.

Are you kidding me?  This is not acceptable.  Furthermore, it’s unconstitutional and an attack on religion.

“Congress shall make no law respecting an establishment of religion, or prohibiting the free excercise thereof.”

“Preston Blackwelder proudly showed off a painting of his grandmother that had hung next to the front door of his Port Wentworth home.

She was the woman who led him to God, Blackwelder said Friday.

And with that firm religious footing, Blackwelder said, it would be preposterous to stop praying before meals at Port Wentworth’s Ed Young Senior Citizens Center because of a federal guideline.

But Senior Citizens Inc. officials said Friday the meals they are contracted by the city to provide to Ed Young visitors are mostly covered with federal money, which ushers in the burden of separating church and state.

Thus, on Thursday, the open prayer at the center was traded in for a moment of silence.

The dilemma is being hashed out by the Port Wentworth city attorney, said Glenn ‘Pig’ Jones, the city’s mayor.

Tim Rutherford, Senior Citizens Inc. vice president, said some of his staff recently visited the center and noticed people praying shortly before lunch was served. Rutherford said his company provides meals like baked chicken, steak tips and rice and salads at a cost of about $6 a plate. Seniors taking the meals pay 55 cents and federal money foots the rest of the bill, Rutherford said.

‘We can’t scoff at their rules,’ he said of federal authorities. ‘It’s a part of the operational guidelines.’

Rutherford said the moment of silence was introduced to protect that funding. He said although the change may have been misinterpreted, perhaps his company could have done a better job selling it.

‘It’s interpreted that we’re telling people that they can’t pray, but we aren’t saying that,’ he said. ‘We’re asking them to pray to themselves. Have that moment of silence.’

Mayor Jones said he was outraged by the change and has promised to find a solution.

‘It was one of the hardest things I’ve ever did as mayor is to look at those people in the eyes and ask them to be patient with me and honor their God in a moment of silence until I can have a resolution to this,’ Jones said. ‘For me to look at their eyes and tell them they can’t thank God for their food, it’s unheard of – I can’t take it.’

Jones said he enlisted the help of Port Wentworth’s city attorney and scheduled a Tuesday morning meeting with Senior Citizens Inc. to determine the best solution.

Jones added he also flirted with the idea of ending a contract the city has with Senior Citizens Inc.

‘Like one lady said, ‘You can stop me from speaking, but you can’t stop me from praying what’s in my heart,’‘ he said. ‘But the best answer right now is that we’re trying to get the best information possible and legal council is looking at what would happen if we continued to pray.’

Blackwelder said the center’s already fragile visitors have been rattled.

Along with threatening the center’s amenities, the decision has frightened the people who use it.

‘Their security consciousness is prevalent anyway,’ he said. ‘You’re threatening their security with their meals and the place where they spend the majority of the day.

‘This is, in my view, an unnecessary intrusion into the private lives of individuals. It’s a bad place to draw a line in the sand.”

The so-called “news” media are aggressively targeting and attacking conservatives for political gain, and I’m not going to take it anymore!

I have just taken a stand with the leading media watchdog organization in America, the Media Research Center (MRC), by adding my name to their “Demand the Media End Their Attack Campaign Against Conservatives” petition, and I’m urging you to do the same by clicking here:

like the MRC are exposing and neutralizing these attacks, but it is crucial for conservative Americans to take a stand with them and demand an end to these attempts to demonize us and our beliefs.

Take a stand right now by clicking below and join with me and thousands of other conservatives who are putting the liberal media on notice and taking this message across the nation.

Thanks for joining with me

“Political Correctness: The Army disinvited the Rev. Franklin Graham from praying at the Pentagon because he might offend Muslim soldiers. But isn’t that the same attitude that led to the Fort Hood massacre?

An internal Pentagon probe mentioned none of this, so no one should be surprised that the painful lesson of Fort Hood has not been learned — that catering to militant Muslims does not win their hearts and minds. In fact, it can embolden them.

In the latest chapter of military PC, the Pentagon canceled the appearance of Graham, son of evangelist Billy Graham, at an upcoming National Day of Prayer event because of Muslim complaints over his past ‘inappropriate’ remarks about Islam.

After the 9/11 attacks, Graham described Islam as ‘a very evil and wicked religion.’ He explained that he thought it was his ‘responsibility to speak out against the terrible deeds that are committed as a result of Islamic teaching.’

The Council on American-Islamic Relations called on its supporters to pressure the Pentagon to withdraw its May 6 prayer invitation to Graham. CAIR hailed the Pentagon’s cave-in as a ‘victory.’

No matter the circumstances, bowing to such a radical group — one with proven terror ties — is a new low in political correctness, even for the Army.

Another group, the liberal Military Religious Freedom Foundation, joined CAIR in complaining about the ‘Islamophobic’ Graham. It argued that the Pentagon showed religious favoritism toward Christianity in inviting him.

Really? The Pentagon holds annual Iftar dinners for Muslims and is building mosques for them. It’s also actively recruiting Muslim soldiers, even after the Fort Hood betrayal, and offering them leave for Islamic holidays.

Yet letting an evangelical preacher pray is too ‘Christian-themed’? Please. If the Pentagon favors any faith these days, it’s Islam.

Our military leadership has been impaired by a PC culture that blinds it to even internal Islamic threats. Now comes this affront to one of the nation’s leading evangelicals, who has boldly warned about such threats.

As it happens, President Obama met over the weekend with the 91-year-old Billy Graham at his North Carolina home as part of a pre-scheduled meeting. Out of respect for the elder Graham, the commander in chief ought to overrule the Pentagon and re-invite his son to speak on the National Day of Prayer.

But given this president’s obsession with apologizing to the Muslim world, we won’t hold our breath.”