“A controversial Texas state website that allows farmers and ranchers on the border to vent their frustration will stay up, despite the objections of some lawmakers.

Texas Agriculture Commissioner Todd Staples launched the website last week to bring attention to the dangerous situation on the Texas border with Mexico.

The website, Protectyourtexasborder.com, allows farmers and ranchers who live and work on the border to share pictures, videos and stories about their run-ins with drug cartels and human smugglers.

However, it’s the site’s chat-room that has generated some unanticipated controversy…” 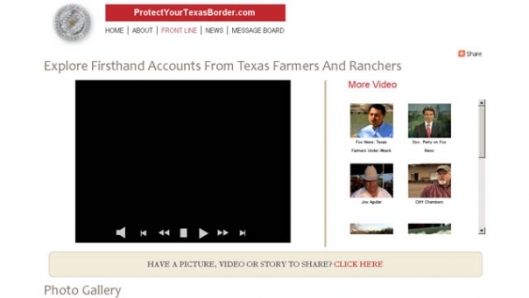 This is a much-needed service and outlet to the people living in along the U.S./Mexico border.

One must expect that some of the commentaries on the site will be quite passionate.  After all, this is not a game but a matter of survival for Texans.  The federal government has abandoned Americans who live and work on the border.

I say let them have their sight, forum and say their peace.  Texans are within their right to do that which they must to protect their land, our country and their family and loved ones.

Congress shall make no law respecting an establishment of religion, or prohibiting the free exercise thereof; or abridging the freedom of speech, or of the press; or the right of the people peaceably to assemble, and to petition the government for a redress of grievances….

A well regulated militia, being necessary to the security of a free state, the right of the people to keep and bear arms, shall not be infringed.

How long it will be before Obama, Holder and Napolitano gets involved to do what they do best, i.e., undermine Americans and attack our liberties.

What component of the U.S. Constitution do Progressives not comprehend?  Actually it has very little to do with understanding our liberties and rights and everything to do with squashing them.

The Tucson Tea Party is under attack and needs our help.  Sheriff Dupnik along with fellow Progressives and local Tucson officials are attempting to silence the voice of patriots living in Tucson, Arizona.

It comes as no surprise that we have heard nothing from the lame stream media on the attacks against these patriots.  Please spread the message and support the Tucson Tea Party.

Please spread the word.  The nation must learn of the infringement upon our liberties and attack on our freedom by Tucson Progressives.  H/t et cetera*.

‘Saying that he acted in this matter because of things he heard on talk radio is just really over the top, just wrong,’ said Esseck.

When I asked the chairman of the local Democratic Party why in front of KMJ? This was his response.

Here we go patriots.  This protest has nothing to do with Tucson, Arizona, mass murder, Jared Lochner or words.  This protest is about destroying the United States, as we know it, oppressing Americans, diminishing our liberties, our voice and crushing the U.S.  Constitution.

Progressives still reeling from the mid-term election setback have been prepared for this moment.

Distastefully, they are using the Tucson mass murders and the ranting of a Schizahoidphrenic to declare war on Americans and the U.S. Constitution, all of which played no role in the horrific acts of Jared Lochner but when did that ever stop a Marxist?

Actually it is more like the Obama administration will use Wikileaks as an excuse to silence the voice of opposition in the United States which by the way is an assault on our first amendment rights.

The infamous Sedition Act, which criminalized speech critical of the federal government and which was passed by the Federalists during another of America’s undeclared wars (that time, against France), lasted only three years, from 1798 to 1801. However, if the congressional critics of WikiLeaks founder Julian Assange have their way, a new and revised version of the Sedition Act may be in the offing.,,,”

WAKE UP AMERICA, WAKE UP!

Defund the FCC! Americans have had it with Obama’s czars and regulatory commissions.  Defund them all and vote out the others Republicans who did not sign off on the letter to the FCC.

“Thirty senators have signed a letter making it clear that should the Federal Communications Commission implement ‘net neutrality’ regulations during its December 21st meeting, the GOP will force a confrontation on the Senate floor over the rules. Doing so would provide insight into how Republicans, as a minority in the Senate, leverage its control over the House of Representatives to hamstring attempts by the executive branch to rule by regulatory fiat.

The letter questions the ability of the FCC to impose the regulations:

‘You and the Commission’s general counsel have admitted in published statements that the legal justification for imposing these new regulations is questionable and “has a serious risk of failure in court.” It is very clear that Congress has not granted the Commission the specific statutory authority to do what you are proposing. Whether and how the Internet should be regulated is something that America‘s elected representatives in Congress, not the Commission, should determine.’”

“…This week a group calling itself Anonymous, claiming to be acting in defense of WikiLeaks, has triggered a series of attacks on the Web servers of companies, governments or individuals that have become involved in this controversy. The disruptions have occurred against Amazon, MasterCard, Visa, PayPal, a Swiss bank, the Swedish prosecutor’s office and the website of the lawyer representing the women who have brought sexual assault charges against WikiLeaks progenitor Julian Assange. Yesterday the Dutch police arrested a 16-year old for participating in the WikiLeaks-related assaults.

The server attacks are called a distributed denial of service (DDoS), which sounds like an event in an Isaac Asimov novel but isn’t funny if it happens to you. Typically, a group like Anonymous overwhelms and degrades an institution’s servers. They do this by hacking into and taking control of thousands or tens of thousands of innocent computers, and then using the compromised computer—now called a zombie or bot—to become part of a zombie army or botnet, which a group like Anonymous or similar ‘master’ will order to flood its target with attacks….”

(3:53) “The intention of anonymous is to protect free flow of information of all types from the control of any individual, government, corporation entity.  We will do this until our proverbial dying breath….

All this from anarchists colluding with Progressives who under the guise of the FCC on December 20, 2010 will move to bowdlerize, manipulate and police the internet in the US  thereby stifling the debate of those who stand in opposition to their fascist agenda.

It should be noted that these same individuals just a few days ago in defense of Wikileaks declared cyber war on the United States.

This socialist alliance is bent upon chaos and the economic collapse of our nation.

In addition, there is something incredibly disconcerting about Progressives comparing their fascist schema to the Civil Rights movement.  Nothing could be further from the truth.

By the way, if you experienced problems earlier this week while attempting to do online banking, shopping or any other use of your credit card/debit card, it was very likely courtesy of Anonymous.

Having personally experienced problems on all levels while these takedowns were in play, I suspect that the entities affected would prefer to keep us in the dark.

A must read:  A New Test Is Proposed in Licensing Radio and TV