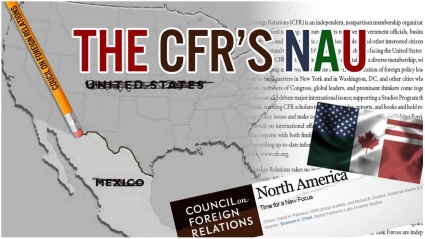 Well, I graduated from “fearfulness” long ago – now I’m in the HORROR stage: Under the North American Union (NAU), Canada, the United States, and Mexico merge and a Parliament is set up over them. This was President George W. Bush’s plan, cooked up during 2005 at his ranch in Texas with the Prime Minister of Canada and the President of Mexico.

But in order to set this up, they need a new Constitution which transforms the United States from a sovereign nation to a member state of the NAU.

How do they get the new Constitution? At an Article V convention.

And, as ordinary citizens who support an Article V convention give daily proof, such tactics work. People don’t think – they follow what popular people tell them, and then they repeat it as if they know all about it.  And they insult, revile and marginalize the people who do tell them the Truth (as they have been programmed by their Conditioners to do).

Americans don’t know that delegates to an Article V convention have “PLENIPOTENTIARY POWERS” and thus have the power (recognized in the 2nd paragraph of our Declaration of Independence) to throw off our present Constitution and establish a new one with a new (and easier) mode of ratification.

Americans don’t know that in Federalist Paper No. 40 (15th para), James Madison invoked this clause in the Declaration of Independence as justification for what they did at the federal convention of 1787:   Instead of proposing Amendments to the Articles of Confederation (as they had been instructed to do), they wrote an entirely new Constitution which created a new government[…]

About nine days ago, a Hispanic anti-Trump protester on the west coast told CNN, “There will be casualties on both sides. There will be, because people have to die to make a change in this world…”

Since that day, protest, fear mongering and attacks against President-elect Donald Trump have continued with no signs of letting up.

Those leading these rallies on the ground, on Communist network news and politicians still reeling from massive losses this past Election Day refuse to accept that the American voter has spoken and that they have lost.

Their response is to double down with a viciousness that the United States may have never experienced in the history of our nation’s existence.

Atop the pile of news that the mainstream media refuses to report are the consequences of the hate, false allegations of racism, vicious attacks, etc. being levied by Communists against Donald Trump to turn the United States on its head to regain their stronghold on America.

For many who are unable to drown out the noise, there can be severe consequences.  Unfortunately, the rationalization of those pushing the buttons is that, “There will be casualties on both sides. There will be, because people have to die to make a change in this world…”

The following article written by Dave Schuler of the Glittering Eye (also a council member of Wow! Magazine) is a must-read.  Please read it through to the end after which I urge parents, grandparents and/or guardians share the article and have a conversation with their teens and young family members.

The Glittering Eye via Wow! Magazine
By Dave Schuler

I strongly recommend you take a little time and read this post by medical professional (and Trump opponent) Scott Alexander. Here’s the context:

I work in mental health. So far I have had two patients express Trump-related suicidal ideation. One of them ended up in the emergency room, although luckily both of them are now safe and well. I have heard secondhand of several more.

Like Snopes, I am not sure if the reports of eight transgender people committing suicide due to the election results are true or false. But if they’re true, it seems really relevant that Trump denounced North Carolina’s anti-transgender bathroom law, and proudly proclaimed he would let Caitlyn Jenner use whatever bathroom she wanted in Trump Tower, making him by far the most pro-transgender Republican president in history.

I notice news articles like Vox: Donald Trump’s Win Tells People Of Color They Aren’t Welcome In America. Or Salon’s If Trump Wins, Say Goodbye To Your Black Friends. MSN: Women Fear For Their Lives After Trump Victory.

Vox writes about the five-year-old child who asks “Is Donald Trump a bad person? Because I heard that if he becomes president, all the black and brown people have to leave and we’re going to become slaves.” The Star writes about a therapist called in for emergency counseling to help Muslim kids who think Trump is going to kill them. I have patients who are afraid to leave their homes.

Listen. Trump is going to be approximately as racist as every other American president.

Hillary Clinton’s contempt for American voters was on full display yesterday when during an LGBT “focused” Fundraiser in New York City hosted by Barbara Streisand, the Crooked One attacked Donald Trump’s supporters labeling them a “basket of deplorables.”

Desperate to please attendees who spent anywhere from $1,200, for limited availability, and as much as $250,000 for a ticket to hear the Crooked One screech, before a crowd of fellow Marxist elites, Clinton dripping of contempt for Trump supporters stated: “You know, just to be grossly generalist, you could put half of Trump’s supporters into what I call the basket of deplorables…The racist, sexist, homophobic, xenophobic, Islamaphobic — you name it. And unfortunately there are people like that. And he has lifted them up….”

So what about the other half?  Covering her bases just in case a Trump supporter decides at the last moment not to vote for Trump:

‘That other basket of people are people who feel that the government has let them down, the economy has let them down, nobody cares about them, nobody worries about what happens to their lives and their futures, and they’re just desperate for a change,’ she said. ‘They don’t buy everything he says, but he seems to hold out some hope that their lives will be different. They won’t wake up and see their jobs disappear, lose a kid to heroin, feel like they’re in a dead end. Those are people we have to understand and empathize with as well….”

Read full article
This morning after the checks have been deposited and credit slips safely tucked into her account, Clinton released a statement in which she apologized (not) for labeling “half” of Trump supporters “the deplorables.”

“I regret saying ‘half’ — that was wrong. But let’s be clear, what’s really ‘deplorable’ is that Donald Trump hired a major advocate for the so-called ‘alt-right’ movement to run his campaign and that David Duke and other white supremacists see him as a champion of their values.” 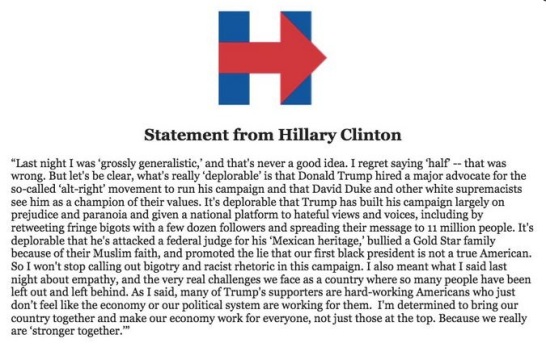 As reported by Bloomberg News, Clinton’s non-apology, in which she doubled down on the name calling and use of the race card was intended to tamp down the outrage sparked across social media by her vile remarks at yesterday’s fundraiser.

The statement was aimed at shutting down the blowback from the Trump campaign and Republicans and preserving Clinton’s appeal to moderate Republicans and independents. It came hours after she made the remarks that hearkened back to comments Barack Obama made in 2008 about people who cling to guns and religion and that Republican Mitt Romney made in 2012 about the 47 percent of Americans who were dependent on the government and would never vote for him….

Apology NOT ACCEPTED and for the record, Clinton attacked Trump supporters last week on Israeli TV where she used the same phrase “the deplorables”. (See: 2:07 of video)

So Hillary is now demanding that her supporters not listen those now labeled the “alt right.” She who is in bed with those who stone women, throw gays from rooftops, rape children, destroy Christian artifacts, slaughter Christians and whose primary agenda is to wipe the state of Israel off the map.  How contemptuous of Clinton to espouse such propaganda on Israeli TV?

Ridicule, labeling, race baiting and name calling is all there is in Hillary Clinton’s repertoire since she’s a lying crook with no credibility whatsoever and now she may not even have that.

The hashtag #basketofdeplorables has been trending across social media for hours in what is a clear backlash against the Crooked One.

Look at the #BasketOfDeplorables in Pensacola Florida last night! What a horrible statement. #CrookedHillary pic.twitter.com/GfevT0KUjd

This sick wench is horrible!#NeverHillary

I proudly stand shoulder to shoulder with the #BasketOfDeplorables pic.twitter.com/v7GQwWt888

She’s a 2 bit liar always was always will be! #BasketOfDeplorables pic.twitter.com/P979auxx9q

#BasketOfDeplorables is just like #BindersFullOfWomen. It ruined @MittRomney, and it will Ruin @hillaryclinton if election is not rigged!

#BasketOfDeplorables aren’t being sued for defamation by #GoldStar parents, after smearing them as liars https://t.co/RWPLYoOdt2

Clinton “apologizes” for #basketofdeplorabes and states she meant ppl are irredeemable. #irredeemable is a good hashtag for Clinton.

Crooked Hillary stepped into it up to her neck.  There is now a video likening Clinton’s #basket of deplorables remark to Mitt Romney’s 47% statement back in 2012.

One more for the road.  Trump supporters labeled by Progressives as “basket of deplorables” but these thugs are not?  How so?

Suggestion to Hillary Clinton, the mainstream media, Progressive establishment of both parties aka NeverTrumpers who continue to lambast and look down their noses on Donald Trump and his supporters, “Thou hypocrite, first cast out the beam out of thine own eye; and then shalt thou see clearly to cast out the mote out of thy brother’s eye.” Matthew 7:5

Just so you know…. 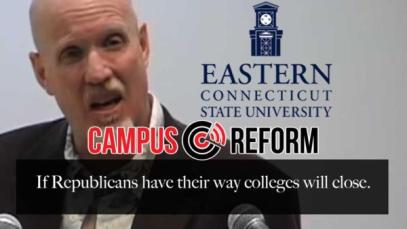 A professor at Eastern Connecticut State University (ECSU) was caught on audio telling his creative writing class that Republicans will close colleges if they prevail in 2014 and that “racist, misogynist, money-grubbing people” want to suppress the liberal vote.

In a four-minute recording of a classroom lecture obtained by Campus Reform, Professor Brent Terry is heard strongly suggesting that conservatives are greedy racists who want to suppress the vote of anyone who might vote liberal.

‘…racist, misogynist, money-grubbing people have so much power over the rest of us. And want things to go back—not to 1955, but to 1855,’ Terry said to his Introduction to Creative Writing class Monday morning.

‘There are a lot of people out there that do not want black people to vote, do not want Latinos to vote….

Fear mongering, hateful Progressive elitist this evil slug should not be allowed near our children. 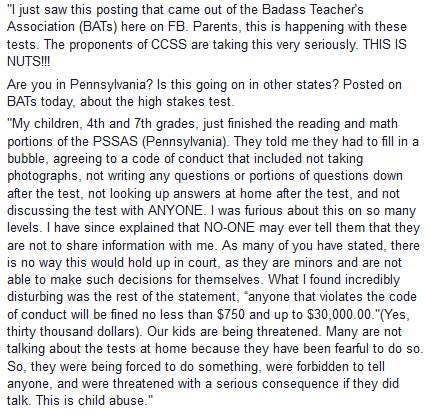 As seen on Facebook.  Is this true? This Facebook message has been circulating in several anti-Common Core groups.  Would children actually be threatened with a fine anywhere from $750 to $30,000?  The language mirrors that in the copyright notice from the US Copyright Office: Would this copyright infringement language apply to students?  Read this from Truman University in Missouri: This notice should put a hold on the goal of collaboration (a 21st century skill) for students: I have an idea.  Let’s all write the CCSSO and ask the organization if it would fine a minor with copyright infringement talking […]

Posted by bydesign001 | Filed under Uncategorized

The Bard of Murdock

“There once was a loud politician,

Who suffered the nasty condition

Of claiming that crime

His skills as a loud rhetorician

As it would appear

The VP is no statistician….”