Granting assurance that a Progressive takeover of the Albany Senate Assembly “would advance key elements of the progressive agenda, including the DREAM Act, a minimum wage increase and women’s equality,” de Blasio injected himself into state politics by vigorously pursuing those on his campaign donor list, (consisting of “labor unions, liberal donors and political operatives”) on behalf of State Progressives seeking re-election.

Speaking to more than 100 of his top campaign donors, Mr. de Blasio made clear that his top policy priorities — immigration reform, rent protections and a higher minimum wage in New York City — could depend on fellow Democrats’ regaining control of the Senate this fall, removing what has long been an impediment to cherished liberal causes.

Mr. de Blasio — whose top political aide, Emma Wolfe, will take time away from her City Hall duties to help candidates — is hoping that a rejuvenated left wing of labor unions and liberal advocates can make the difference in a handful of key tossup Senate districts, from Long Island to Buffalo.

Republicans, wary of an assault from what they call a group of radical and irresponsible liberals, are hoping to turn Mr. de Blasio’s involvement to their advantage. Already, Republican officials are saying they will warn voters about letting a left-leaning mayor pursue his agenda unfettered in Albany…..

Republicans successfully countered by wielding De Blasio’s involvement in state politics “as a weapon against the Democrats, warning suburban and upstate voters to be wary of a state government dominated by city liberals.”

The victory for Republicans and New Yorkers is a repudiation of the Progressive agenda and de Blasio himself.

Commie Bill, an elitist and out of touch spent Election night deflecting blame for the failure of his takeover plot, which resulted in major State Senate losses for Progressives by attempting to convince donors that the 2014 election paves the road for a Progressive takeover in 2016.

If Progressives had prevailed, the Albany State Assembly would have veered to the extreme left, which would have proved disastrous for New York State.

Between Commie Bill’s tepid rapport with the re-elected Andrew Cuomo and his failed takeover attempt of the Albany State Assembly, de Blasio may now find his agenda in limbo. Thus, in order to achieve anything de Blasio must journey into unfriendly territory.

The outcome weakened Mr. de Blasio’s hand in Albany and could curtail the scope of his first-term agenda. Lacking the partnership of the Senate, the mayor’s plan to restore New York City’s authority over its rent-control laws is likely a nonstarter. And his efforts to expand rights for immigrants and raise the city’s minimum wage could face significant opposition.

In negotiations, the mayor will also be more dependent on his on-again, off-again friend Gov. Andrew M. Cuomo, whose track record of helping Mr. de Blasio is checkered at best. And some political advisers have suggested that Republican legislators might be inclined to exact revenge on the downstate mayor who had the temerity to challenge their power.

‘He’s in a tough position because no mayor in recent memory attempted to take out any segment of any part of the power centers in Albany,’ said Hank Sheinkopf, a longtime Democratic consultant. ‘He needs Albany more than the Albany folks need him.

For all the morning-after recriminations flying among disappointed New York Democrats, Mr. de Blasio was unruffled when he made his first remarks about the election at a news conference at City Hall on Wednesday afternoon….‘I don’t think that’s how politics works,’ the mayor said, adding that he did not think that ads depicting him as a liberal boogeyman, and aimed at upstate voters, had affected the outcome….

State Senate Republicans have now been warned by de Blasio to support his agenda or else. Sound familiar.

So what are the odds that Republicans are going to nail de Blasio to the wall?

Fawning correspondence between the raspy-voiced Rangel — an ex-smoker now facing a tough re-election — shows he even solicited funds from the industry for the mayoral campaign of David Dinkins.

The documents were provided as part of a tobacco litigation settlement in 1998 and are now public.s….’ 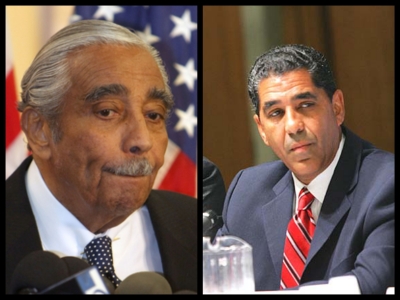 I would love to say that this is the election that Greasy Charlie goes down in flames but I don’t want to jinx it. Not that the other candidate is any better.

Charles Rangel is up for re-election this year against Adriano Espaillat who nearly unseated Rangel in the last primary.

I would love to say that this is the election where Greasy Charlie goes down in flames but I wouldn’t want to jinx it, not that the other Espaillat is any different.

Espaillat who like everyone else in politic as has no problem with nepotism is under investigation by the FBI for funding provided to community organizations in Harlem.

The FBI has been questioning people about state Sen. Adriano Espaillat and his funding of community groups in upper Manhattan, sources told The Post yesterday…

‘FBI agents were asking about member items that Espaillat provided to community organizations,’ a source said, referring to lawmakers’ practice of directing money to their districts….

Espaillat sponsored or co-sponsored almost 100 member items as an assemblyman in the four years before his Senate election in 2010, records show….

Espaillat’s ‘drop dead or move away’ vote under fire

State Sen. Adriano Espaillat’s controversial votes as an Albany legislator more than a decade ago are coming back to haunt him in his bid to oust veteran Harlem Congressman Charles Rangel.

Espaillat, who previously served in the state Assembly, voted for a law in 1999 that scrapped the commuter tax on suburbanites who work in New York City — a move that has deprived the Big Apple of billions of dollars in revenues over the past decade.

The Rangel campaign claimed that Espaillat’s vote amounted to telling his constituents ‘to drop dead or move away….’

Okay, I admit it, I enjoy watching Progressives eat their own. Rangel for the first time in decades has his work cut out for him this election season.

While Rangel has always carried Harlem and his district in the Bronx, these districts have been remapped thus changing their ethnic makeup to more than 50% Latinos. Coincidence?  I don’t think so. (Am I the only one who believes that by remapping Rangel’s districts, a message is being sent?)

Taking that and gentrification into account, Rangel has resorted to doing what Progressives do when in a bind, i.e., gin up support by use of the race card.

Rep. Charles Rangel accused chief rival Adriano Espaillat of running entirely on his ethnicity while blasting his record as state senator during a heated debate Friday at WABC-TV.

‘I hope somewhere during this debate…to try to share with the listening and watching audience just what the heck has he done besides saying he’s Dominican?’ Rangel demanded 14 minutes into the one-hour showdown….

Espaillat shot back by charging that the 22-term congressman was playing dirty politics….

What is the difference between these two Progressives? Nada. Make they knock each other out with the race card.  Speaking of which, Rangel has a lot of nerve since he never met a deck of race cards he did not like…until now. 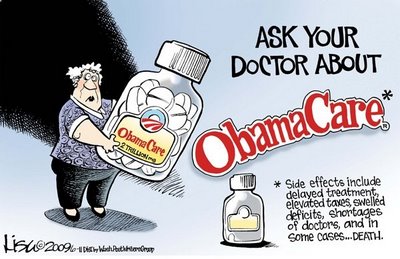 Census stats from 2010 tell us there are about 40 million Americans 65 and older today — 17 million are men and 23 million women, give or take a half million since the data is getting as old as the country.

Eighty million more Americans are between the ages 45 and 64, and about 3.5 million hit “near-senior” status of 55 every year….

This is why Democrats are panicked about the fall elections. This is why they should be panicked. Older voters know exactly what is going on with their heath care. They know exactly what has happened to their premiums and the availability of their doctors. They also know that President Obama could appear in the Rose Garden a hundred times proclaiming victory for Obamacare and it won’t change a thing about the impact on their lives….

“Despite growing grassroots resistance, Republicans and Democrats appear committed to passing amnesty either piecemeal or in any other form that they can ram through.

Developing a sensible immigration policy that would work to Americans’ benefit is an increasingly elusive goal. The most insurmountable roadblocks are the incessant, high pressure lobbying tactics for more cheap labor that the Chamber of Commerce and other special interest groups put on pliant legislators. Another barrier is the media’s steadfast refusal to expose the House and Senate bills’ realities, that the legalization of at least 12 million illegal immigrants and a near tripling of legal immigration within the first decade will irreparably hurt unemployed Americans….”

While you’re at it, check out Bad Blue’s “BOEHNER BRAGS OF EASY REELECTION: won’t repeal Obamacare, top priority is Amnesty for illegal aliens.” It will make your blood boil.