This says it all.

I have no doubt that Democratic Socialism, when it emerged as the dominant political arrangement in Europe following World War II. It was a slow process, but in 1993 the pact was inked, and now has grown to 28 decreasingly independent states, and 513 decreasingly free people.

Modern and urbane, all the Europeans’ socialist plans nevertheless failed, each country at its own pace, to be propped up by introducing hundreds of thousands of immigrants for purposes I’m still not quite sure. All we know is that they can’t let their people, or their domains and return to self-determination.

So now, as predicted, they must begin to consider the darker side of their elusive lover and the role extraordinary cruelty will have to play in holding onto power once all its other now that those schemes have failed. For they will not let go.

There are all sorts of natural laws involved in branding and selling socialism, even if well-intentioned instead of knowing lies.

“The Snake” says it all.

Muslims lie not because they are liars by nature but by choice. Systematic lying as a religious policy is deadly, and if our politicians do not understand this, thousands could die. – Don Boys, Ph.D.

The mission of the jihadi/jihada (one who engages in holy “war with non-Muslims to establish the religion”) is to bring Islamic law, sharia, to the world, whether through peaceful or violent means, and Ilhan Omar has dutifully begun her vocation for Allah, who is described in the Quran as the greatest deceiver of them all.  It goes on to say that ALL deception belongs completely to Allah, that Allah actually raises wicked individuals to deceive and scheme, and commands people to do evil so that he may then have reason to destroy them – for Islamic supremacy.  Mohammed led by example when he broke promises and treaties with the Jewish tribes, Banu Qaynuqa (624), Nadir (625) and Quraysh (627), and subsequently beheaded all the men, captured and enslaved the women and children, and enriched himself and his troops with the towns’ bounties.  We must therefore recognize that Omar is mandated by religious doctrine to emulate Mohammed’s deception, using any means possible against her victims to advance the Islamic ideology.  “When hate crimes against [her] and [her] followers don’t exist, they have to be invented,” to deflect attention from the jihadi onto the Muslims as victims.

Since her installation as a member of Congress, Omar has repeatedly censured Israel and Israeli and American Jews, making antisemitism acceptable and freely spoken by the re-awakening antisemitic community.  Her allegations are a stealth technique of projection, as when the subject attributes his own unpleasant traits, impulses or ideas to another.  For instance, Omar accuses Israelis of “abuse against women,” “apartheid” and “occupation,” distinctly Muslim deeds.  She accuses Jews of dual loyalty to Israel, but not people of, say, the Palestinian territories, Somalia, Iran, Central and South America, who might donate their earnings to provide financial assistance to their homelands.  Lest we forget, these three Muslim lands are known supporters of terrorism, whereas Israel is known to be the only democratic country in the Middle East, one of America’s most steadfast allies, and one that provides services that benefit people throughout the world – and this is the one she denigrates and boycotts.  There can be no other valid reason except the centuries-nurtured visceral hate.

Ilhan Omar’s hostility is clearly defined by Islamic law as against Judaism, a religion that follows the Torah and Commandments for morality over evil.  When Mohammed’s new religion was rejected by Jews and Christians for such pagan superstitions as circling the Ka’bah, and for its violent proselytizing, to name just two reasons, he turned their prayer direction to Mecca and against those who rebuked him, slaughtering thousands and seizing their treasure.  It is this resentment that was instilled into Mohammed’s followers.  They are removed from every aspect of individual freedom and bound to carry his millstone of hate and envy.

“Ultimately we [Muslims] can never be fully citizens of this country…because there is no way we can be fully committed to the institutions and ideologies of this country.” – Ihsan Bagby, leader of CAIR-KY, president of its board and Islamic Studies professor at the University of Kentucky, 1991.

“If we are practicing Muslims, we are above the law of the land.” – Mustafa Carroll, executive director of the Dallas-Fort Worth CAIR branch, 2013.

Islam’s blame/shame culture is why this jihada will never admit to and apologize for her actions. Omar scarcely walks back her numerous canards when she immediately restates her free speech prerogatives to criticize Israel’s policies, using old antisemitic myths about Jews and money, as though Islam’s oil wealth has had no influence on our western banking, the media, our lower grades and universities, and indeed the entire United Nations.  Her vague apologies have never actually acknowledged her wrongdoing or responsibility, and she would obviously run a repeat performance.  She has also used the infamous Muslim Brotherhood maneuver, inserting the shrewd, devious warning that she must never be condemned “for being Muslim,” the Islamophobic threat intended to intimidate any who would contest her word.  She is not naïve.  Highly adept in her cunning, she is guilty of a fervent allegiance to Islam that supersedes any loyalty to America and, regrettably, she appears to have completely hoodwinked the inexcusably credulous Nancy Pelosi.

“Islam wishes to destroy all States and Governments anywhere on the face of the earth which are opposed to the ideology and programme of Islam regardless of the country or the nation which rules it. The purpose of Islam is to set up a State on the basis of its own ideology and programme, … regardless of … which nation is undermined in the process of the establishment of an ideological Islamic State.”  – Abul Maududi, one of the two most widely read and respected Islamic thinkers of the 20th Century. “

“The goal of Islam is to rule the entire world and submit all of mankind to the faith of Islam. Any nation or power that gets in the way of that goal, Islam will fight and destroy.” – Islamic Law and Constitution, pg. 262)

In the late 18th century, the Muslim Ambassador Adja explained that the Quran  gives Muslims the right and duty to make war against all, make slaves of prisoners, and that every Musselman who is slain in battle was sure to go to Paradise.   The Wahhabi-type Muslim radicals, named for the Barbary Pirates from the Barbary Coast of North Africa, waged terrorist attacks through two decades.  After a four-year war, a treaty was signed to end the aggression in 1805.

Yesterday’s Islamic Barbary pirates are today’s Islamic Somalian pirates from the same region, with the same pronouncements of jihad against the West.  It now includes those who participate in “large scale mass migrations [that] become invasions,” known as hijrah. It overtook the Middle East, is prevalent through much of Europe, and is with us now, which is why the Arab countries refuse to take in their own refugees.  Aided by the Left, the goal is to overtax the economy, tear down the wealthiest nations, redraw demographics and culture, and secure positions where they can work to overturn our civility and government.

Ilhan Omar, a Somalian Muslim, took her oath of office on the Quran, as did Rashida Tlaib, the “Palestinian” who wrapped herself in the Palestinian flag.  In so doing, they pledged their allegiance not to the United States of America, but to Allah.  Additionally, Omar is suspected of having ties to the radical Muslim Brotherhood (MB), and herein lies the projection connection.   While she accuses Jews of duplicity, we must always reinterpret what the devotee of Islam says, particularly one who has been a keynote speaker for the IRUSA (Islamic Relief USA), the largest, global, Muslim fundraising group with terrorist ties, and CAIR (Council of American Islamic Relations), listed as an unindicted co-conspirator in the largest terrorist fundraising operation in US history.  As MB affiliates, these women seem to be working to support subversive factions aligned to destroy America and Western civilization.

And while it was unexpected to hear her recent criticism of President Obama, considering his affection for Islam, and for other “flawed” presidents, Omar may be promoting herself and the new Progressives as the real “hope and change.”  It may have been an unguarded moment when she expressed disdain for everything American, or perhaps she hopes to prepare the directionless youth, who’ve been deprived of their identity, religion, history, and reason, to submit to governance by another – Allah. 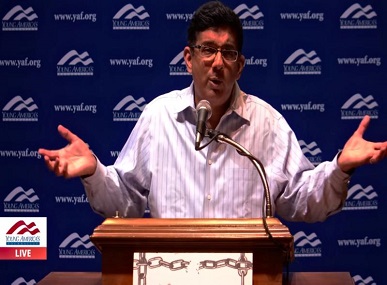 Regardless of the spin as spun by Progressives, the Democratic Party has gone full circle…or could it be that Democrats are today exactly who they were a century, a century and a half ago.

I suspect the latter.

Ditto that for 2009 when Barack Obama was elected. Enter 2019 and….the Democratic Party having removed its sheep’s clothing is showing the world that nothing has changed except that Democrats are operating in the open again.  Democrats are still THE PARTY OF BIGOTRY.

Useful idiots are out of their league. Their failed attempts to take on and demolish Dinesh D’Souza backfires Y-U-U-UGELY.