Micah Mattix of the Washington Free Beacon in his review of a publication by “Michael Walsh, ‘The Devil’s Pleasure Palace: The Cult of Critical Theory and the Subversion of the West’” penned fascinating article about diminished free speech through political correctness and intolerance which ignited the war on free speech and installation of no free speech zones on Progressive college campuses across America today under the guise of bias incident reporting. 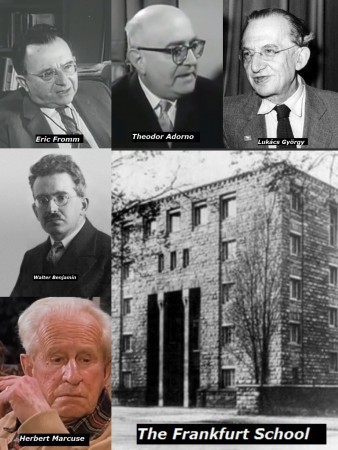 The origins of political correctness can be traced back to pre-War Germany and ”a group of Marxist academics at the Institute for Social Research at Goethe University in Frankfurt, who would come to be known as the Frankfurt School…” These Marxist intellectuals would soon gain access to America’s universities courtesy of our open borders.

…Comedians and politicians are disinvited from speaking events for fear they might offend someone by expressing a contrary point of view. Students write to campus newspapers to apologize for contributing to institutional racism simply by being born white….

Where did all of this come from? As surprising as it might sound, according to Michael Walsh, we can thank prewar Germany.

In The Devil’s Pleasure Palace: The Cult of Critical Theory and the Subversion of the West, Walsh argues that the current obsession with politically correct speech began with a group of Marxist academics at the Institute for Social Research at Goethe University in Frankfurt, who would come to be known as the Frankfurt School. The scholars, Georg Lukács, Theodor Adorno, Walter Benjamin, Erich Fromm, and Herbert Marcuse, among others, developed a wide-ranging, if often contradictory, critique of the principal tenets of “bourgeois” Western culture—from the centrality of reason and individuality to Christian sexual mores….

We opened our borders to Marxist intellects that converged upon universities across America and it is there that the seeds were planted.

In the aftermath of World War II, America stood alone as the world’s premier military power. Yet its martial confidence contrasted vividly with its sense of cultural inferiority. Still looking to a defeated and dispirited Europe for intellectual and artistic guidance, burgeoning trans-national elite in New York and Washington embraced not only the war’s refugees, but many of their ideas as well, and nothing has proven more pernicious than those of the Frankfurt School and its reactionary philosophy of ‘critical theory.’ At once overly intellectualized and emotionally juvenile, Critical Theory – like Pandora’s Box – released a horde of demons into the American psyche. When everything could be questioned, nothing could be real, and the muscular, confident empiricism that had just won the war gave way, in less than a generation, to a central-European nihilism celebrated on college campuses across the United States. Seizing the high ground of academe and the arts, the New Nihilists set about dissolving the bedrock of the country, from patriotism to marriage to the family to military service; they have sown (as Cardinal Bergoglio – now Pope Francis – once wrote of the Devil) “destruction, division, hatred, and calumny” – and all disguised as the search for truth.

In The Devil’s Pleasure Palace we will look at the ways Critical Theory took root in America and, once established and gestated, has affected nearly every aspect of American life and society – and what can be done to stop it.

If Walter Bendix Schönflies Benjamin, Theodor W. Adorno, Erich Seligmann Fromm, György Lukács, Herbert Marcuse to name a few, were alive today, they would be heralded as champions and joyous over the fruit borne from seeds sown decades ago.