Judicial activism?  The fix is in?

Judge Gloria Navarro has made new rules for her courtroom that (I would bet) stun even the prosecution.

Last week, Judge Navarro shocked the courtroom with her manipulation of jury selection in the Bunkerville retrial in Las Vegas, Nevada. She refused to allow the defense to have their allotted peremptory challenges and selected the jury for them.

Today, during the questioning of the first witness of [then Under-sheriff] Lombardo, Judge Navarro’s control issues took a very bizarre twist[…]

The swamp extends to the judiciary. 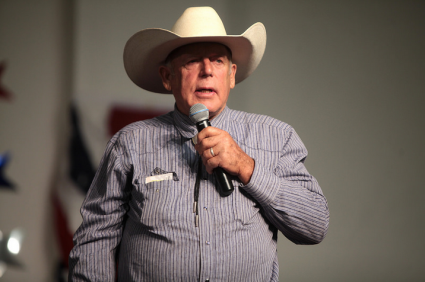 Cliven Bundy’s trial is set to begin on June 5, 2017. Mr. Bundy needs our support in addition to the fact that our government needs to be reined in.

Here is why every American citizen should care about the Federal case against Cliven Bundy, et al.  Whether you believe it or not, this case DOES affect you.

What the Government does NOT want you to know is that EVERYTHING the Bundy’s have done is protected by the Constitution. They broke NO Constitutional Laws.

The Bundy’s believe that the Constitution always has been the Supreme Law of the Land, which it is, no matter what the Government tries to tell us now. The Bundy’s do believe in the need of a Federal Government, but the kind that our Founding Father’s established; a LIMITED government of the People, by the People, and for the People. Not the government we have today, where the People have no rights and no say[….]

As Americans were preparing for Independence Day festivities, Nevada Sheriff Doug Gillespie late Thursday broke the news that in his view, rancher Cliven Bundy (above) “must be held accountable” for his alleged role in the Bundy Ranch Standoff.

The Nevada sheriff put it on record that he strongly disapproved of the Americans, many of whom are Oath Keepers converged upon the Bundy Ranch successfully thwarting the federal government’s efforts to confiscate Bundy’s land and feels that Bundy should “be held accountable” as a result.

While not demanding accountability of the Bureau of Land Management in its handling leading up to and during the Bundy Ranch Standoff, Gillespie stated that BLM “must reconsider its methods in order to prevent the bloodshed.”

… Gillespie said he spoke to Bundy many times in the months before the roundup. He said he made it clear to Bundy that, if his family was going to protest, it must be peaceful….

‘If you step over that line, there are consequences to those actions. And I believe they stepped over that line. No doubt about it,’ Gillespie said. ‘They need to be held accountable for it….’

Of course, who really stepped over the line continues to be a matter of opinion.

Thursday’s remarks by Gillespie segued to BLM announcing Saturday their agreement with the Nevada Sheriff that Cliven Bundy “must be held accountable’ while dismissing any blame for their role in the standoff and the mishandling of Bundy’s cattle.

‘…It is unfortunate that the sheriff is now attempting to rewrite the details of what occurred, including his claims that the BLM did not share accurate information,” she said. “The sheriff encouraged the operation and promised to stand shoulder-to-shoulder with us as we enforced two recent federal court orders….’

Rest assured that the timing of this news breaking while Americans are distracted with Independence Day festivities is no coincidence and now that it is on record that Cliven Bundy must be held accountable for his alleged actions, to give BLM cover for whatever comes next, we can expect Harry Reid’s brown shirts to make their move any day now. H/t The Blaze.

As the media piles on and attempts to connect Las Vegas shooter Jerad Miller, and his wife, to the Bundy Protesters, the facts are not coming out. By his own account Jerad Miller was asked to leave the Bundy Ranch. Even so, he was there long enough to get on camera with NBC News:

Though Jerad Miller was at the Bundy Ranch it does not mean they wanted him there.

Mother Jones, in an article titled The Chilling Anti-Government, Cliven Bundy-Loving Facebook Posts of the Alleged Las Vegas Shooters, exposes the truth in one screen shot.

Originally posted on The Mad Jewess:

This black American man (Bundy bodyguard) says Bundy is not a racist and would take a bullet for him:

‘Mr. Bundy is not a racist,’ he told CNN. ‘Ever since I’ve been here, he’s treated me with nothing but hospitality. He’s pretty much treating me just like his own family.’ ‘I would take a bullet for that man if need be. I look up to him just like I do my own grandfather,’ he added. ‘I believe in his cause and after having met Mr. Bundy a few times….

You know something isn’t quite right when a member of The Black Panther Party speaks out in Bundy’s defense. Wake up America.

“This is for all cowards on the right who bailed on #ClivenBundy. #tcot #ocra #tlot #BundyRanch pic.twitter.com/74bU4GoiTv” @MadJewessWoman

Below is what a black Marine has to say about the Clive Bundy comment.

The media distorts information to the point of social division. This is a photo of myself and the resilient, often charismatic, and maybe not so tactful Cliven Bundy. He’s a cowboy and a helluva family man, not an orator. One thing he definitely isn’t – a racist. I found his comments to not only be NOT racist, but his own view of his experiences. Who the heck are we to determine another man’s perspective on the world around him?

Larry Elder called out Sean Hannity who should have known better for wasting not a minute distancing himself from Cliven Bundy.

Bundy Saga: Media Whips Out The Race Card — Even Hannity Falls For It – By Larry Elder

…The way the left slings around the race card has a specific purpose. It shuts down debate. It takes focus off the awful “recovery.” It buys time for more stories about the wonders of Obamacare. More importantly, it keeps the 95 percent black Democratic vote flowing — without which the Democrats cannot win at the presidential level.

Why can’t conservatives who ‘support Bundy’ say: ‘Even if I conceded his remarks were ‘racist,’ it nothing to do with his land dispute. Again, Bundy described the unintended consequences of government dependency. He described what sociologists call the underclass. Didn’t the liberal Daniel Patrick Moynihan warn about the rise in single-parent households? If Bundy truly ‘hated’ blacks he would be encouraging this very dependency…’

Racism. Racism. Racism. Water’s wet, sky’s blue, the media love outing white “bigots” — especially if they are male, old, Republican, Christian and — ideally — Southern. Even a Southerner who votes Democratic, like Paula Deen, will do nicely….

Black Conservatives speaking up for Cliven Bundy when the usual suspects and even some of those tough talking Conservatives who apparently do suffer from an extreme case of which guilt are running for the nearest exits. God bless America….and honesty!!!!

Okay, in my recent post entitled, “NYT Brings the Race Card into Bundy Ranch Standoff to Distract from Govt Land Grab”, I stated that I would not revisit this smear campaign and attempt to distraction attention away from the federal government land grab and Harry Reid’s was on Cliven Bundy. However, being a firm believer of righting the wrongs, I make an exception.

The New York Times intentionally edited Mr. Bundy’s interview to make it appear as if Bundy was a racist. Shame on them!!!!!!

Below is a full clip of Cliven Bundy’s remarks about Blacks, Mexicans which all will agree is not racist followed by the version put out there by the New York Times.

Now for the video put out there by the New York Times.

As I said in my earlier post, PREDICTABLE and lastly, Glenn Beck, having done enough harm, you owe Cliven Bundy a huge apology.