In spite of a global campaign that took off when Michelle Obama touted a sign “Bring our Girls Back” posted to social media, the US and UK governments through surveillance learned the location of 80 of 276 Chibok girls kidnapped by the jihadists but failed to launch rescue attempts. 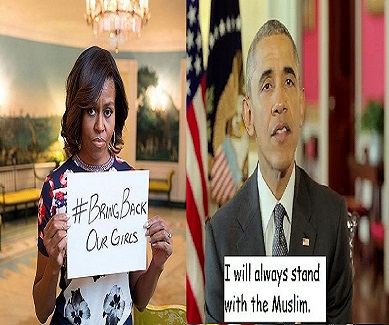 Dr Andrew Pocock, the former British high commissioner to Nigeria, has now revealed that a large group of the missing girls were spotted by British and American surveillance officials shortly after their disappearance, but experts felt nothing could be done.

He told The Sunday Times that Western governments felt ‘powerless’ to help as any rescue attempt would have been too high risk – with Boko Haram terrorists using the girls as human shields.

Dr Pocock said: ‘A couple of months after the kidnapping, fly-bys and an American eye in the sky spotted a group of up to 80 girls in a particular spot in the Sambisa forest, around a very large tree, called locally the Tree of Life, along with evidence of vehicular movement and a large encampment.

He said the girls were there for at least four weeks but authorities were ‘powerless’ to intervene – and the Nigerian government did not ask for help anyway.

He said: ‘A land-based attack would have been seen coming miles away and the girls killed, an air-based rescue, such as flying in helicopters or Hercules, would have required large numbers and meant a significant risk to the rescuers and even more so to the girls…’

Everyone knew two years ago so how is this news?  About the only ones surprised, that the West was aware two years ago, the location(s) of the Chibok girls of northern Nigeria kidnapped by Boko Haram and did nothing is the mainstream media.

Selectively purged from most news reports is that the Chibok girls were Christians forced into captivity, to convert to Islam. Brainwashed, many are suspected of carrying out suicide bombings.

…The fact that these are girls, at least, makes their plight of international political and media interest. Feminism is an easy fall-back position for the foreign policy/human rights community. For that, the girls and their parents may yet have reason to be grateful. It allows the British Foreign Secretary to tweet that ‘using girls as the spoils of war and the spoils of terrorism is immoral’. But what neither the UK nor the US authorities is prepared to draw attention to is that these girls – all or nearly all of them – are Christians.

Boko Haram might, indeed, abduct Muslim girls from school because it thought they should be back at home, to be covered up, beaten, and to make the soup. But it would only dare to sell Christians into slavery and prostitution. Not only are they Christian. It is their Christianity which caused them to be victims….

In the meantime, they have become a propaganda tool for Progressives.

A few weeks ago, six people were killed and several injured on a college campus in northern Nigerian city of Kano when a 15-year-old suicide bomber blew herself up.

Just 72 hours earlier, the same scenario was repeated “at a trade show and petrol station. In a separate incident, police arrested a 10-year-old girl wearing a suicide belt.”

Because women and girls are not allowed to be searched and raise fewer suspicions, parents of the girls kidnapped by Boko Haram in April of this year and BringBack Our Girls activists now fear that the Chibok girls have been indoctrinated or coerced by Boko Haram into becoming suicide bombers by threatening to kill their families.

….another key member of the coalition, Bukky Shonibare, stated that the number of days the abducted girls had spent in Boko Haram’s custody was enough for them to have been indoctrinated by the sect into carrying out their nefarious activities…According to Shonibare, “Seems abducted women that were undergoing indoctrination and brainwashing while in hostage for years are now being sent out as suicide bombers. However, 100 days is long enough for anyone’s ideologies or principles to be distorted, especially teenagers whose values are still being shaped. To know the possible impact of 100+ days on one’s ideologies, psychologists say it takes only 30 days…

As usual, Hollywood, the mainstream media and fellow Progressives who claim to represent and fight for the interests of women globally are MIA.

It is no secret that Boko Haram is planning an attack in the United States. Americans should be concerned. Too many, including our government are not. Thus, they will never see it coming.