For eight years, Barack Obama’s foot soldiers in the Communist media complex have controlled the narrative through the lens of “Who are you going to believe? Me or your lying eyes?”

During that time, useful idiots bought what they were selling, hook, line and sinker.  Apparently, the Communist media complex sees no reason why useful idiots wouldn’t continue to accept fake news narratives no matter how ridiculous the lies.

CNN is fake news did it again.  Last Tuesday night (8/28/2018) during CNN’s “The Situation Room” with Wolf Blitzer, the CNN panel engaged in the usual fear mongering and anti-Trump propaganda.  Propagandist, Jeffrey Toobin  managed to upstage the whole panel with his statement that President Donald J. Trump at a dinner the evening before with Christian pastors sent a dog whistle to the effect, “‘I’m Donald Trump and I’ll protect you from the scary black people.” Toobin then went on to say the following:

Antifa is widely perceived as an African-American organization, and this is just part of the same story of LeBron James and Don Lemon and Maxine Waters and the NFL players and the UCLA basketball players … This is about black versus white. This is about Donald Trump’s appeal to racism and it just happens all the time. And we never say it. We don’t say it enough for what it is, but that’s what’s going on here…

The coward, Wolf Blitzer, along with fellow propagandists on the panel gave Toobin a pass as did the other globalist media outlets complicit in the deception.  Cherry-picking, the usual suspects are parsing Toobin’s words to push the lie that Trump is warning his white supporters about scary Black people[..]

What are Progressives saying? They’re saying that the mere fact that a person of the Caucasian persuasion (no pun intended) is breathing is racist.

Fact:  The very thought that anyone would entertain and levy any of the following allegations is in itself racist. NO EXCUSES.

Fact:  It is not rocket science; the very biased allegations levied against Caucasians as racist can be said of the person making the allegations.  Why? Because it is true.

Fact: But more than anything else, this is about ensuring that Americans remain divided even if one has to guilt-trip, fear monger and espouse the most ridiculous propaganda to do so.

Farmers’ Markets “normalize” the “food consumption habits of white people” and contribute to the oppression of minorities, according to two professors at San Diego State University.

Pascale Joassart-Marcelli and Fernando J Bosco, two geography professors at SDSU, criticized the “whiteness of farmers’ markets” in a chapter for Just Green Enough, a new anthology published by Routledge in December.

“Farmers’ markets are often white spaces where the food consumption habits of white people are normalized.”

The anthology, which features contributions from a variety of professors, aims to highlight the harms of “environmental gentrification,” a process in which “environmental improvements lead to…the displacement of long-term residents.”

Farmers’ markets are one such environmental improvement that can lead to gentrification, Bosco and Joassart-Marcelli argue, saying farmers’ markets are “exclusionary” since locals may not be able to “afford the food and/or feel excluded from these new spaces.”

When white people move out of a city it’s “white flight.”

When they move in it’s “gentrification.”

When they move to another country it’s “colonization.” 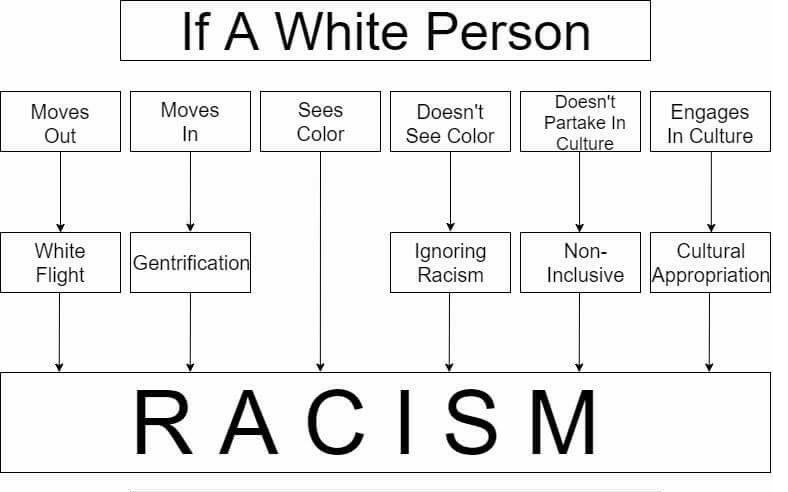 When non-whites move into a city it’s “diversification” or “cultural enrichment” and when they emigrate from another nation they’re “refugees.”

It’s almost as though there’s an agenda here…

This social exclusion is reinforced by the “whiteness of farmers’ markets” and the “white habitus” that they can reinforce, the professors elaborate, describing farmers’ markets as “white spaces where the food consumption habits of white people are normalized.”

This is a paradoxical outcome, since farmers’ markets are often established in the interest of fighting so-called “food deserts” in lower-income and minority communities. Since grocery stores in low-income communities often lack fresh quality produce, the professors say that in some cases, farmers’ markets may be only source of quality and affordable produce for locals.

Citing research they conducted in San Diego, however, Bosco and Joassart-Marcelli claim that 44 percent of the city’s farmers’ markets are located in census tracts with a high rate of gentrification, leading them to conclude that farmers’ markets “attract households from higher socio-economic backgrounds, raising property values and displacing low-income residents and people of color.”

Why aren’t they “diversifying” the area and bringing “cultural enrichment”?

“The most insidious part of this gentrification process is that alternative food initiatives work against the community activists and residents who first mobilized to fight environmental injustices and provide these amenities but have significantly less political and economic clout than developers and real estate professionals.

The professors stop short of offering specific remedies, but do conclude that “curbing gentrification is a vexing task” that requires the involvement of both community members and local governments.

“Strong community involvement,” they say, is necessary in order to ensure that “the needs of the poorest…residents are prioritized,” while local governments can enact “equitable zoning policies, rent-control laws, and property tax reforms in favor of long-time homeowners” to combat the trend toward gentrification.

Did someone tell Michelle Obama who thinks that she created farmers’ markets later “labeled” “green zones” even though farmers’ markets existed for decades, heck centuries. They are called, “vegetable stands.”

Notice that the so-called mollification of an imaginary problem is regulation and  extortion, dog whistles for re-distribution of wealth.

Now in his second-term, de Blasio, a white man but Communist, so that makes it okay, will expand his redistribution scheme by punishing and extorting, correction fleecing property owners. [See:  Bringing Soviet Planning to New York City]

Communists, socialists, whatever the heck they label themselves these days are everything that they accuse other of being.  THEY are the five-toed pachyderm hiding (not so much) in plain sight, i.e., “RACISTS.”

How can I go there?  Easy.  Rather than blame white people, Agenda 21/Agenda 2030’s role in the creation of “franken markets” and their detrimental effects are  omitted.  Now THAT would be of worthy note if authors of the report, SDSU’s geography professors Pascale Joassart-Marcelli and Fernando J Bosco, sought to take a more credible stance in their reporting.

Now THAT would be credit-worthy reporting on the parts of SDSU’s geography professors/authors, who instead of alerting readers to the perils lurking at many farmers’ markets in urban areas such as the negatives of genetically modified crops, instead opted to peddle racist propaganda and division.

Finally, can’t blame this latest negation of the Obama’s legacy, in this instance, Moochelle’s on Trump.

Fact:  A sure sign of desperation, Communists are eating their own.

Hillary Clinton has blamed everyone except her mother for losing last year’s president election. To hear Hillary tell it, white people cost her the election.  Shameful.

Go away, Crooked, go away.

Greg Howard, a New York Times reporter journalist propagandist penned a piece a few days ago entitled, “Was That Racist?,” in which Howard accused white female pedestrians of not stepping aside because they’re racist or something to that effect.

Howard’s accuses Caucasian female pedestrians in his path of not “walking courteously” (meaning stepping aside to allow him to pass) thereby forcing a Black man “completely off the sidewalk” only for Howard to find himself “standing in the street or in the dirt.” I

In his propaganda piece, Howard asks why don’t these white women in “acknowledge me” is it because doing so would force them to come to grips with their fear Black men.

Fox News, Tucker Carlson on his program and Jason Whitloc, host of Fox Sports 1 takes on Greg Howard’s bias and phobia of white women (hey, just calling it by its name.)

When it gets to the point that one cannot walk the streets of Manhattan’s crowded locations without viewing a walk down East 42nd Street through the prism of race, then one should get the hell out of Manhattan….and stay away from downtown Brooklyn.

There is a reason that New Yorkers have earned the reputation of being rude and it is not that we intend to be. We are merely focusing on the path before us.

Walking down NYC streets enroute to and from work, the subway station, bus, grab lunch or run an errand, depending on the time or day and the number of people in your path requires that one put a pep in his or her step while at the maneuvering his or her way through the obstacle course that lay before them.

Anything less will turn a five-minute walk at midnight down Seventh Avenue from West 27th Street to West 42nd Street into to a 30-minute walk during rush hour or at high noon. Trust me, speed walking is not enough. The same applies to everyone, Black, White, Asian, male, female, young or old.

Greg Howard is a racist, full of crap and in serious need of therapy.

There is not one person among the unfringed who will take responsibility for the seeds of war that they are sowing in the streets of America.

After the brutal, near-massacre of Republican congressmen by a Bernie fan, the left-wing media and other Democrats are lining up to blame everyone but themselves.

Jane Sanders and Wolf Blitzer faced off after the shooting by the Bernie Sanders campaign worker this week. One thing was clear at the end — nothing will change. CNN’s Wolf thinks his station is covering the news “responsibly” and “accurately” where others aren’t.

The ‘Bernie 4 President’ groups were present and active participants in most of the violent attacks during the campaign. Bernie’s socialist agenda must inevitably lead to violence.

Bernie supporters were the ones causing the violence. The hard-left backed Bernie and they’re violent.

Jane Sanders told Blitzer, “We have to be able to discuss the issues without demonizing the opponent. And honestly, Wolf, I think the media needs to look at itself as well.”

“The media characterizes every conversation as an adversarial one. Your job, the media’s job, I think, is to illuminate the facts, not fan the flames,” she said[…]