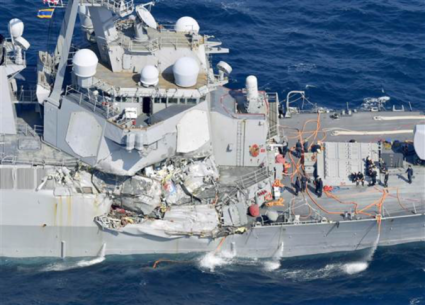 Eight years of Barack Obama’s own declaration of war on our U. S. military, our enemies no longer fear us.

The Sign Of The USS Fitzgerald: Our Ships Will Be Sunk, Jets Blown Up. Get Out Of #SYRIA NOW

This song, “The wreck of the Edmund Fitzgerald” by Gordon Lightfoot was strong on my heart last week. Before the 2nd Fitzgerald ship collided:

#USSFitzgerald 2017 – this is a sign and what type sign I dont know-
BUT, Nov 1975, the Fitzgerald sank in Lake Superior.
Saturday, we lost SEVEN Navy men. 7 is completion #.

6 Days ago, the Edmund Fitzgerald was STRONG on my heart: https://gab.ai/MadJewessWoman/posts/8773925[…]

See also, Bunkerville’s post: Something smells about the media story re: USS Fitzgerald. 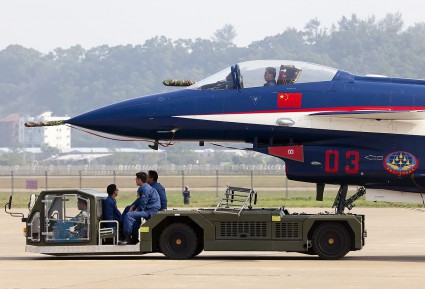 The Glittering Eye by Dave Schuler

I didn’t want to let this go by without comment. At National Interest Ted Galen Carpenter muses over whether China’s economic slowdown might encourage its leaders to foment a war:

‘China’s leaders likely feel increasingly uncomfortable. The implicit bargain that has been in place since the onset of market-oriented reforms in the late 1970s has been that if the public does not challenge the Communist Party’s dominant political position, the Party will deliver an ever-rising standard of living for the people. The bloody Tiananmen Square crackdown in 1989 was a graphic reminder of what happens if the Party’s position is challenged. However, until now, the economic portion of the bargain seemed secure, characterized by breathtaking, often double digit, rates of growth. It is uncertain what happens if the Party can no longer maintain its part of the implicit bargain, but it is likely that a dangerous degree of public discontent will surface….

Just for grim fun let’s list some of the places where a major war might break out. It could be deliberate…

“Map released by ISIS including KSA, Iran, Afghanistan, Pakistan, India and Bangladesh is Designed by their citizens!” @Shahidmasooddr/twitter.

The Islamic State is now expanding into Pakistan and Afghanistan. Osama Bin Laden would be proud. Can’t say that we did not see this coming.

ISIS is now expanding into Pakistan and Afghanistan, by distributing copies of a pamphlet entitled Fatah (victory), to Islamists in these countries. As we read from a recent account:

‘The dreaded Islamic State of Iraq and Syria (ISIS) is trying to expand its influence in Pakistan, with pamphlets being distributed in Peshawar and border provinces of Afghanistan, seeking support for jihad.

A booklet titled ‘Fatah’ (victory) in Pashto and Dari languages was distributed in Peshawar, the provincial capital of Khyber-Pakhtunkhwa, as well as in Afghan refugee camps on the outskirts of the city, the Express Tribune reported…

‘Formerly known as the ISIS, the group introduced itself as Daulat-e-Islamia (Islamic State) in the pamphlet and made an appeal to the local population for supporting its jihad (struggle) for the establishment of an Islamic caliphate.

A number of hardline groups operating in border areas have already announced support for the outfit. Among them, Abdul Rahim Muslim Dost and Maulvi Abdul Qahar, stalwarts of Saudi Arabia-backed Salafi Taliban groups operating in Nuristan and Kunar provinces of Afghanistan, have extended support to the self-styled caliph Abu Bakr al-Baghdadi…..

Am I the only one concerned about our men and women serving in the military that are still deployed in Afghanistan?

I do not believe for one minute that Barack Obama and the Muslims in the East Wing did not see this coming.

As for the people of Asia, South Asia and the Middle East, there may come a day soon that they too will miss George W. Bush.
Pro-ISIS Pamphet appear in Peshawar

Also coming out of Pakistan:

Days after this pro-ISIS graffiti appeared in Balochistan a place of worship of Zikris was attacked and 7 died pic.twitter.com/a2I8VneFET — omar r quraishi (@omar_quraishi) September 3, 2014

Interesting, but not terribly surprising. Obama is nothing if not consistently anti-Western.

‘If the Obama administration’s proposed education and cultural exchange budget for next year passes Congress unchanged, fewer students and scholars could study abroad via the venerable Fulbright Program due to an unprecedented $30 million, or 13 percent, cut to the program.

Neher is one of 53 Nobel Prize winners among the 355,000 alumni strong global Fulbright community which also includes 29 heads of states or government, 80 Pulitzer Prize winners, numerous top academics and business leaders and spans across more than 150 countries.’

Obama isn’t big on saving money. If he cuts a program…

In other words, Caucasians and Christians, even Christians of color, need not apply. Muslims only. This is Barack Obama’s official contribution toward the Islamization of America.

Though officials at the World Health Organization are feverishly working to stop the spread of the Ebola virus in what is now seven African nations, their efforts may be for naught. In Guinea, a hot spot for the deadly contagion, government health officials have said that the outbreak is nearly under control. Yet, Reuters reports that the government “planned to stop publicly releasing the death toll to avoid causing unnecessary panic.”

But panic may be in order.

Despite the best efforts of emergency health workers it appears that virus may have crossed out of Africa into Europe.

The outbreak of Ebola Virus in seven west African countries has broken through all containment efforts and is spreading like wildfire. According to Christian Relief groups working in Guinea and Liberia, the number of confirmed infections jumped 15% in just the last 24 hours. In addition, 40 illegal alien migrant workers from the outbreak area, who came ashore in Pisa, Italy, are showing signs of Ebola infection and are being isolated in Pisa Italy because of fever and “conjunctivitis” (bloody around the eyes). According to the World Health Organization, this strain of Ebola is entirely new and although it is close to the Zaire strain, it is different, thus accounting for false-negative test results . . . . . for weeks!

Those false-negative results meant people who were actually infected with Ebola, were returned to their families and neighborhoods to recover from what they believed was the Flu or a case of food poisoning, only to spread the Ebola further.

The result has been a complete loss of containment of this Ebola outbreak.

With the likely arrival of Ebola in Pisa, Italy, the European continent is now at severe risk.

Italian officials deny the reports, but alternative media in the country suggests this is the reason for a complete lock down of a hospital in Pisa, where it is believed to have infected some 40 individuals. Other reports trickling in from various sources like social media indicate the virus may have also appeared about 50 miles from Pisa in Tuscany, Italy.

Alarmingly, a story that appeared about the outbreak on national news wires was reportedly removed by the Italian government for “national security reasons,” suggesting that there is more to the reports than Italian officials are willing to express to the public at this time….