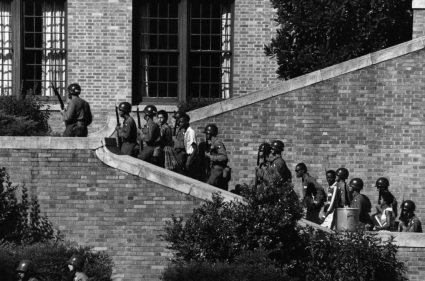 A Patriot’s Prayer Rally has been scheduled for Aug 26 in a park near Golden Gate Bridge. (Jonathan Turley discusses the legal side.) Nancy Pelosi has called for the permits to be revoked, calling this a “white supremacist” rally, even though only 1 of the 5 lead organizers and speakers are white. What Nancy is really doing is sounding the dog whistle for West Coast Antifa mobs to descend on the park and Pabreak up the prayers, and a few heads. Of course, expect California police to stand by at a safe distance and watch since that’s all they’ve eve done at other California venues-for-violence.

In 1957 Ike called up the 101st Airborne and federalized National Guard to escort a little black girl into a school in Little Rock. In 1962 and 63, JFK federalized the Guard to insure James Meredith could enter the University of Mississippi and to move George Wallace away from the doors of the University of Alabama denying two other blacks entrance. Both Ike and JFK predicated their decisions on keeping the peace, protecting the innocent and preventing anarchy. Oh, James Meredith is a lifelong Republican. And those governors? All Democrats, direct descendants of the founding of the Democrat Party in 1824, to protect slavery as an institutional pillar of the party’s power, leading to an inevitable war.

Some say that this is what the Democrat’s are hoping to bury along with all those confederate statues of officer, that they were all Democrats.

Q: Should Donald Trump federalize troops in California? Will they oblige? Sounds good to me.

It’s getting so one can’t enjoy a decent meal without a bunch of Commie loons attempting to deliver an unhealthy dose of heartburn alongside the plate.

Efforts to do just that failed last week when a bunch of protesters attempted to interrupt Senator Ted Cruz dinner with Arkansas Governor Asa Hutchinson.

According to reports, restaurant staff drenched the protesters with a bucket of water from a second-floor balcony after they began blocking customers from leaving.

The incident occurred Tuesday, when Sen. Cruz was having a night out with Arkansas Gov. Asa Hutchinson in Little Rock. Protester Robert Nunn insists that he and fellow protesters were following the law.

‘We wanted to make sure that (Cruz) heard from us,’ Nunn said, because apparently First Amendment rights include interrupting someone’s dinner.

Sen. Cruz may or may not have heard the ruckus, but an employee of the restaurant, Cache, certainly did.

‘I looked up and I saw, it was clearly one of the employees, he had a white jacket on and he had a bucket and I was like, ‘Hmm, what’s going on with that?’; Nunn told reporters. ‘And before I knew what happened, he had dumped it….’

Arkansas Senator Mark Pryor, a Progressive in a mostly Conservative state has been caught lying thanks to Project Veritas, James O’Keefe.

Pryor who has taken a “public” stance that he does not support gay marriage has been lying to constituents in order to be re-elected as proven in the following video in which the Project Veritas went undercover.

Members of Pryor’s campaign team revealed to undercover operatives of Project Veritas that Pryor does indeed support gay marriage as confirmed in the video by gay activist, Bailey Rae Bibb, chairman of the Stonewall Caucus.

You can view the transcript, here.