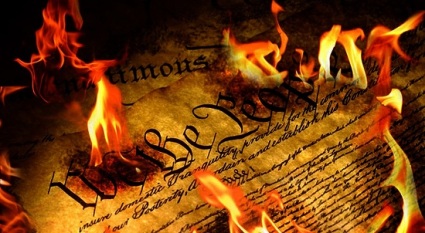 Pat Buchanan is a little more dark, and less optimistic than I am about America’s chances if an impeachment process is begun.

Pat and I and separated by 7 years. We are also divided by perspective, he spending most of his professional life looking at American life and the world from the top down, while I’ve spent my life looking at the world from the bottom up. My view of the Constitution is also from the bottom-up, “life, liberty and happiness” as being written for the common man and woman. In Pat’s rarefied air those sorts of thoughts may only rarely cross a man’s mind, but which, even for a man of his age and experience, seems to be a common disability among conservatives.

More surprisingly, for a staunch Roman Catholic, Pat never says publicly whether God has a stake in America. I’m not sure Pat thinks about this very much, either. After all, the link between God, Jesus and the common folk was how it all got started, and the case can be made, in Darwin terms even, that God caused America to happen, and as a result, chose sides in the 2016 election. Franklin Graham believes so, and Pat will have to go back to the heady days of Reagan to note the many happy Christians walking around these days, shaking hands and slapping backs with millions of people they don’t know.

Of course, I believe God has a huge stake in America and its restoration, and just as He selected the most unlikely band of English religious wingnuts to first settle America in 1607, he picked the most unlikely character to begin its Reformation in 2016.

But Pat is right, there is a coup attempt in progress. Only what do we do about it? Or even think about it?.

Again, because of the God-factor, I’m optimistic.

Andy McCarthy, one of the surviving good guys at “National Review” since WFB passed away, penned an article a few days ago asking the question whether the Mueller investigation is a first step in the impeachment of Donald Trump?