Translated from Swedish to English with the combined help of Google and Bing: . .

A 30-year-old woman is in custody on suspicion of murdering an infant at an asylum accommodation in Rottneros in Sunne municipality. During Sunday a 20-year-old Somali was detained as a suspect for the crime.

The five-month-old girl was transported from the asylum accommodation Sunne Hotels & Camping to the Central Hospital in Karlstad, but her life could not be saved.

Doctors found that there was a lack of clarifications about the death and a 30-year-old woman was taken into custody and later was arrested last week on suspicion of murder.

A 20-year-old man, a Somali, was chased for several days but was also seized by police. During Sunday the District Court decided that he would be arrested on suspicion of baby murder. 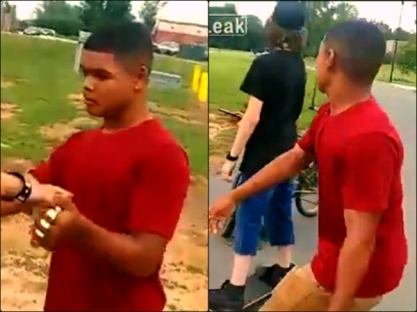 There are many instances when prosecuting someone to the fullest extent of the law just does not seem good enough. This is one of the instances.

A shocking video shows a 16-year-old launching an apparently unprovoked attack on a 12-year-old boy while wearing brass knuckles in what could be another example of the infamous “knockout game.”

The 23 second clip shows Faulkner County teen Kane Millsaps flipping off the camera before brutally striking the 12-year-old in the face.

Millsaps, who claimed he was provoked, pleaded not guilty to battery, a felony, and possessing an instrument of crime. He is being charged as an adult over the incident, which took place on May 31st in Conway, Arkansas.

Millsaps said he attacked the victim because he was “running his mouth saying he was an MMA [Mixed Martial Arts] Fighter and he could beat him up,” however, the witness who recorded the incident told investigators that the victim “did not even see Millsaps coming and did not know he was going to be hit.”

The victim, who was knocked unconscious, reportedly had his cheek punctured, suffered a bruise on his eye, a cut on his neck and numerous broken teeth[…]

Since this whole thing was videotaped, prosecute this thug’s accomplices; namely, the teen who handed him the brass knuckles and the videographer both of whom were aware of the oncoming assault.