Every Monday, the WoW! community and our invited guests weigh in at the Watcher’s Forum, short takes on a major issue of the day, the culture, or daily living. This week’s question:Should The U.S. Leave The UN?

James Kirwan: Good question. I believe the US should leave the organization and turn the building into rent-controlled apartments on Turtle Bay to help alleviate the dearth of affordable apartments in NYC. I’d love to see the General Assembly turned into a food court: they could even keep the flags if they add Panda Express and Taco Bell.

The truth is the current administration could simply walk out of the organization. Nikki Haley would resign her position and the President and Secretary of State would refuse to submit her replacement. Since the position is appointment, there is nothing Congress could do about it.

If Congress wanted to support the move, it could defund the organization by submitting and approving legislation to the President to do that. During both Bush administrations the USA withheld dues to the organization, but succeeding presidents Clinton and Obama reversed those moves.

Such moves would be temporary. The next Democratic administration could simply return to the organization by paying the dues and appointing a UN Permanent Representative.

Permanently leaving the UN would be a major change in diplomatic policy, and major changes are difficult to get done in a huge, bureaucratic organization with checks and balances built in. There would be significant bureaucratic resistance to doing so, with every step likely fought in the courts. It would take years and require like-minded Democrats – something that I don’t see happening without a major screw up by the UN. And an organization that promotes anti-Semitism, protects child rapists, and is incapable of protecting villages from genocide or the world from a nuclear North Korea proves it has staying power after some pretty serious screw ups.

But the truth is that the UN has little clout and with each scandal it loses more. Perhaps the best solution from the perspective of those of us who want the USA to leave the UN is to ignore it and allow the organization to sink into complete irrelevance through its own mistakes.

Doug Hagin:WE should leave post haste frankly. The UN (Useless nations, as I call it) is a nest of miscreant nations which always seem to favor dictators and terrorists while bad mouthing the western nations. Especially the US and Israel.

The UN was a good idea on its face after WWII. Unfortunately, FDR, the first world leader to recognize the Soviet Union insisted that ‘Uncle’ Joe Stalin have a major seat at the table and a veto. President Truman had a whole host of Soviet sympathizers and outright spies like Alger Hiss advising him that he inherited from FDR’s administration. So he likewise compounded this grave error, even giving Soviet satellites who were basically colonies of the USSR their own seats and votes. Big mistake…totalitarian dictatorships never play well with democracies. That of course opened the door for all sorts of dictatorships and failed states to destroy the original premise like termites while milking western democracies for all kinds of cash.

The UN Human Rights Commission(UNHRC) was always one of the laughable misnomers ever. It was constantly dominated by some of the most despotic countries in history, and it’s main objective, really, was demonizing Israel which made it a great group to be part of as far as Barack Hussein Obama was concerned.

A year year after it was established, in 2007, the UNHRC passed what they called Permanent Agenda Item 7. What it did was to establish a separate standard for judging anything Israel did. It provided a platform to automatically ‘investigate’ Israel and condemn it for just about anything it did to defend itself, while taking for granted any Palestinian libel against Israel.

In other words, special standards for Jews and Israel and a different one for say, Iran, Venezuela or Pakistan. There’s a word for that.

To show you how this worked in practice, out of 135 resolutions the UNHRC passed, 68 of them condemned Israel for ‘human rights violations.’ By contrast, Iran was mentioned just six times.

UN organizations like UNESCO and UNWRA operate on similar levels. They’re all simply just money pits for the U.S. taxpayer.

We get nothing out of it, and nothing of any value whatsoever is accomplished based on the UN’s original goals. There’s no reason for America to stay in the UN. 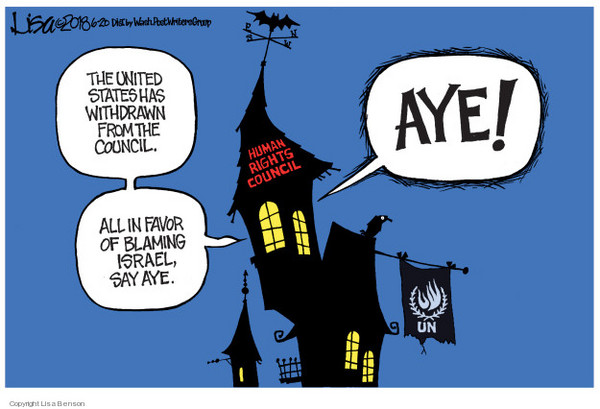 Laura Rambeau Lee: With a total of 193 member nations, the United States is assessed 22% of the United Nations regular budget and 28% of its peace keeping budget, which they calculate as our “fair share” contribution to this organization. This translates to over eight billion dollars annually our government is taking of our hard earned tax money which is being turned over to be redistributed to other member nations as they see fit. The United Nations is at the forefront of the climate change hoax, which is a scheme to redistribute wealth from developed to developing countries. Even more insidious is the impact the United Nations Educational Scientific and Cultural Organization (UNESCO) has on our educational system. What started out as the International Baccalaureate programme, a high school charter school, now has programs beginning in elementary school and continues through middle and high school. The agenda has been to promote cultural diversity and indoctrinating our youth to believe they are citizens of a global community. This is pure Marxist and collectivist ideology and it is being inserted into much of the curriculum to which our children are being exposed. We should absolutely pull ourselves and our money out of the United Nations and get the United Nations out of the United States.