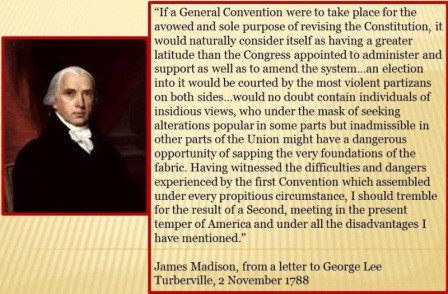 Our Constitution delegates only a handful of powers to the federal government. But 100 years ago, we started electing Progressives (Fabian socialists) to State and federal office. With the enthusiastic approval of the American People, the Progressives set up the socialist regulatory welfare governments (state and federal) we now have. It’s unconstitutional; but Americans didn’t care because they were being taken care of by the governments, and their children were getting “free” public school educations.

So for the past 100 years, the federal and state governments and the American People have ignored our Constitution.

And they say amendments which will “rein in the abuse of power by the federal government” when it “violate[s] its constitutional limitations,” 2 can be obtained only at a convention called by Congress pursuant to Article V of our Constitution.

Article V provides that if two thirds of the States apply for it, Congress shall call a convention for proposing amendments to the Constitution. 3 However, Delegates would have the right, as recognized in the 2nd paragraph of our Declaration of Independence, to throw off the Constitution we have and write a new Constitution which creates a new government. This has happened before!

Our first Constitution was the Articles of Confederation. It had defects, so on February 21, 1787, the Continental Congress called a convention to be held in Philadelphia “for the sole and express purpose of revising the Articles of Confederation”. But instead of proposing amendments, the Delegates wrote a new Constitution, with an easier mode of ratification, 4 which created a new government. In Federalist No. 40 (15th para), James Madison invoked the Delegates’ right to abolish our form of government, as recognized in the Declaration of Independence, to justify ignoring their instructions and drafting a new Constitution which created a new government.