You just can’t make this stuff up and while I’m on the subject, let this be a lesson, better yet a wakeup call, to my fellow New Yorkers.

On Thursday from 12 noon to 8 p.m., somewhere between 500 and 1,000 Yemeni-owned grocery stores will close their doors tomorrow in protest of what they claim is a Muslim ban. [Gee, I thought they were Iraqis, Iranians and Pakistanis which according to some people makes me a racist.]

According to the Yemeni Businesses Shut Down & Rally Against “Muslim Ban”  Facebook page:

On Thursday, February 2, Yemeni business owners across five New York boroughs will close 1,000 stores from 12pm to 8pm in response to the Trump administration’s infamous “Muslim Ban” executive order. This shutdown of grocery stores and bodegas will be a public show of the vital role these grocers and their families play in New York’s economic and social fabric and, during this period, grocery store owners will spend time with their families and loved ones to support each other; many of these families have been directly affected by the Ban.

Thursday evening at 5:15pm, at Brooklyn Borough Hall, 209 Joralemon St. in the back of the building facing the plaza, the Yemeni American community will hold a rally, where some merchants will share the impact the Ban has had on them and their loved one. The program will begin with the Muslim call for prayer and a public sundown prayer by Muslim rally participants. The prayer will be followed by several Yemeni merchants and their families sharing personal stories of how their lives and families have been impacted by the ban, as well as stories read on behalf of families who are afraid to come forward.

“The program will begin with the Muslim call for prayer and a public sundown prayer by Muslim rally participants.”

When a bodega is anything but. 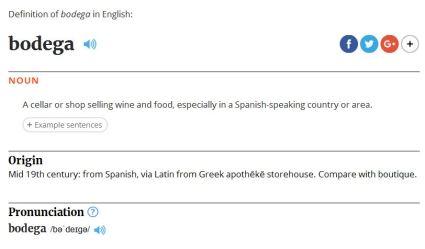 The New Yorker in me just cannot let this go.  A “bodega” is a Spanish owned grocery store. If said grocery store is owned by a Yemeni, Pakistani, Korean, Chinese, Black American, Jew, Italian, whomever then it is NOT A BODEGA.

As a native born New Yorker, I am fed up with non-New Yorkers and moving here and re-defining everything to fit their agenda in the same way that they and their fellow Progressives have co-opted MLK, Jr.’s legacy and that of the Civil Rights movement in pursuit of an endgame opposed by most Black Americans.

Wake up New York! While I have posed the following questions to my fellow New Yorkers,

I rarely receive more than a “uh-huh” to any of these questions followed up by the party I am addressing suddenly changing the subject.

Tomorrow’s strike isn’t really about an imaginary Muslim ban.  These grocery stores and other businesses owned by Muslims shuttering their doors for eight hours to non-Muslims in New York City Thursday are sending a warning shot over the heads of non-Muslims throughout the City.

Wake up America!  These people own businesses across the nation.