Three Albany-SUNY students have been indicted for fabricating a racially motivated attack. 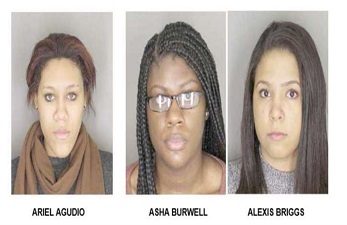 Ariel Agudio, Asha Burwell and Alexis Briggs, all Black alleged that a large group of white men and women assaulted and hailed racial epithets at them on a bus back in January 2016.

In a rush to judgment, campuses across the nation and the grievance industry expressed their outrage over the incident. However, footage of the occurrence from every angle has proven the allegations false showing that the accusers were the aggressors.

A grand jury on Monday indicted the three women on the assault and false report charges.

The allegations sparked immediate outrage on campus and across the country. Hillary Clinton even tweeted her support for the girls.

Surveillance video from the bus, however, appears to show that the women were the aggressors and now they’re facing assault charges.

Below is video footage from several angles of the altercation that appears to have been instigated by Agudio, Burwell and Briggs. At no time does it appear that they were under assault.

Law enforcement should one up this whole deal by adding charges of bias and assault against these three. After all, their assault and false allegations are clearly biased meaning that they themselves are guilty of that which they accused of others.

The intent is there so screw political correctness and send a message.